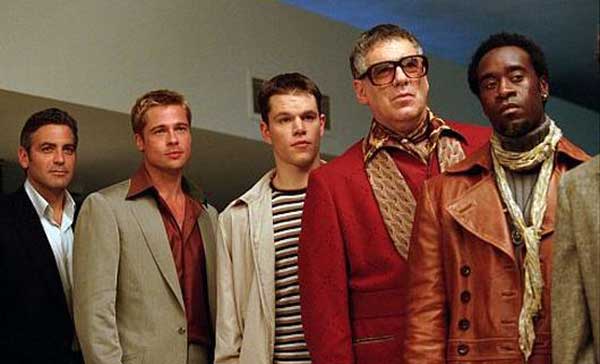 As the Academy of Motion Picture Arts and Sciences (and every other provincial, back-slapping institution for the purveyance of “arts”) quite often does, another faux-prestigious award needs to be invented for the sole purpose of giving it to just one guy: The Most Embarrassing Fake British Accent Of All Time – awarded to Don Cheadle in OCEAN’S ELEVEN. Surpassing even Keanu’s Idiot-British in BRAM STOKER’S DRACULA or MUCH ADO ABOUT NOTHING, to call Cheadle’s abomination of the mother tongue “inauthentic” would be a compliment.

Cheadle is one of OCEAN’S ELEVEN, a group of super-thieves gathered by an ex-con, Danny Ocean (George Clooney) to heist three Las Vegas casinos simultaneously. Like that 1960 Rat Pack movie of the same name. Only dafter.

In the TV movie THE RAT PACK Cheadle played Sammy Davis Jnr., a role which called for the most talented actor of The Pack, as he had to mime not only singing, but tap-dancing, trumpet-playing and six-gunning, so it is with great concern that we view this exemplary actor’s abject ignorance and lack of perception of one particular inflective tongue, based on his own spoken language! (Well, actually, preceding his spoken language, but this ain’t the forum for resolving etymological beefs.)

Still, casting Cheadle as a warbling limey was only nominally more sensible than casting the shovel-mouthed Julia Roberts as a “beautiful woman.” And as casting choices go, this movie was at a disadvantage from the outset with the impossible task of filling the shoes of one Francis Albert Sinatra. In a role which Frank insouciantly tossed off as a lark (which cast all the more sheen on it for its rebellious bent), head-waggling George Clooney steps up as Danny Ocean. And fails.

With OCEAN’S 11, as with ROBIN AND THE SEVEN HOODS, or JAILHOUSE ROCK, or EVERY WHICH WAY BUT LOOSE, we’re not so much dealing with movies, as with “movie stars.” (True to its pedigree, there are modern “stars” and “stars-to-be” sprinkled liberally throughout ELEVEN 2001.) Re-making films such as these will not capture the consecrated quality afforded the originals, the passage of time having transformed those icons into gods. It is merely a fiscal exercise, involving brand-name recognition (buy the rights and sully the nostalgia), curiosity quotient (we’ll get the Frank & Dino fans into the theater at least once), next-generation retro hipness (“I’m so kewl cos I dig the “classics”), crossover marketing (with this ensemble, we’re bound to get someone through the turnstiles) and providing A-List actors with work to keep them off reality shows.

Directed by Steven Soderbergh, the premise to heist Las Vegas casinos is the only tie with ELEVEN 1960, as this remake had to cater to the state of advances in hi-tech security, the screenwriter tasked with updating the story (Ted Griffin) sensibly eschewing re-creating The Rat Pack’s lo-tech heist note for note.

Of the gang, Brad Pitt is Clooney’s Dino; toss-up on Sammy Davis Jnr. (Bernie Mac or Don Cheadle); Matt Damon is the privileged kid, so suffices for Lawford; excepting Elliott Gould and Carl Reiner, the remainder of the Eleven are “passengers,” including Ben Affleck’s brother and James Caan’s son gaily taking on half-dimensional roles.

Maybe it’s just that previous generation’s devil-may-care tilt at Life (or at least, the media’s reporting of it) that gives ELEVEN 1960 more of a rose-colored flare than all the gadgetry and gags this remake offers as collateral. Though there are attempts at capturing the magic and camaraderie of the original (Clooney’s best line to Pitt, “Ted Nugent called – he wants his shirt back”), this movie’s redemption is in its slick production value – it may ring hollow as a buddy-piece, but it slams along frenetically with a dapper soundtrack to match and is truly a guilty ocular pleasure, highly watchable for its appealing camerawork, lighting and set design.

ELEVEN 1960 packed a hilarious, if not frustrating, twist ending – unequivocally a more substantial wallop than the anchor this remake is built on: the interpersonal fizzle between Danny Ocean and the “beautiful woman.” Both the relationship and the movie end the same way: Nothing Happens.

With this ensemble, one would expect roiling acting chops flung at the viewer like raw meat to lions, but the only players who consistently chew their roles delectably are Andy Garcia (as the casino owner who gets heisted), Gould and Reiner. Everyone else is flailing for substance, including Pitt and Clooney who only have a few good moments together; the rest of the time, vying for enough screentime trying to top each other for one of those provincial, back-slapping, faux-prestigious awards that already exists: People Magazine‘s Sexiest Man Alive.

My vote is for Frank Sinatra.