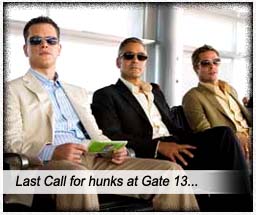 Like a rehabilitated version of its two retarded brothers, OCEAN’S THIRTEEN is still eye-candy (primary colors and insatiable set dressing screams at us within the opening five minutes), it is still big band bop underscoring a lavish, hedonist production, it is still man-toys squirming their taut butts through unutterably outlandish scenarios – but this time ‘round, the direction is wiser, the plot is tighter and some of the jokes are actually funny.

My expectations going into THIRTEEN were not high – the Sequel Syndrome, I believed, would eat this production alive as soon as it was greenlit. You know the formula – you’ve seen it spiral out of control with every “blockbuster” (how I hate that word) from X-MEN to PIRATES; brace yourself for a dumber summer.

So when director Steven Soderbergh fills his first act with “past tense” sequences, showing us the Setup of this heist, I thought we were in for it – now, not only will the heist be in past tense (as in OCEAN’S ELEVEN and TWELVE – where man-toys spend inordinate wrap time explaining every detail which we didn’t really miss, but were never shown in the first place) – we’re also gonna get the Setup and the Formula and the Solution and everything goddam else in past tense as well! Bluster for luster.

The story (by Brian Koppelman and David Levien) soon emerges after the first act’s unnecessary smash-cutting. Slamming with the scamming without too much glamming. And hooks us – by crook! Reuben (Elliott Gould – one of Danny Ocean’s “Eleven”) has been taken for an investment ride by devious veteran hotelier, Willie Bank (Al Pacino, super-cool, super-cruel, taking over where Andy Garcia left off), leaving Reuben bedridden from a major heart attack. Both Reuben and Bank have “shook Sinatra’s hand” – a milestone which should forge a tacit bond between them – so Bank’s betrayal is doubly grave, which prompts Ocean (once again, George Clooney) and his Eleven (nay, Remaining Ten, featuring The Damon, The Pitt, The Cheadle, et al) to seek revenge. In the only way they know how – through a major con.

The boys reconvene in Las Vegas to destroy Bank insidiously, by fixing all the games on opening night in his new super-high-roller casino and busting him. To do this, they must of course pull the most convoluted machinations and confidence tricks this side of Houdini. Usually when heist movies show us “how it’s done” we marvel at how easy it is and why more people aren’t heisting, but when the OCEAN’S films show us, it looks so hard and expensive that it’s not worth the effort.

There are a host of funny subplots: David Paymer as a V.U.P. (Very Unimportant Person) – a hotel critic mistaken for a regular guest; Casey Affleck and Scott Caan cause comedic mayhem inciting wage riots at a Mexican dice plant; Don Cheadle (whose Brit accent has degenerated to such an egregious quacking that it’s not worth commenting on anymore) hilariously channels an Evel Knievel clone; while Damon seduces Pacino’s right-hand woman, Abigail (Ellen Barkin, whose breasts are really barkin’).

The film’s PG-13 rating becomes annoyingly apparent when after twenty minutes of seduction, Abigail – uncontrollably crawling over Damon’s big-nosed character due to a “Gilroy” aphrodisiac – still hasn’t shimmied out of her low-cut, sheer, skin-hugging red dress. Are they Amish teenagers to keep necking that long without nakedness? (Barkin’s lucky her breast-aug is so tantalizing, cos she’s always had a face that looks like it took second place in a lemon-sucking competition.)

Eddie Izzard – Brit-suave and clinical-cool – is brought in as a kind of super-crim consultant, for the super-security-computers Bank’s casino boasts.

Vincent Cassel returns as the skulking Night Fox, his presence just screaming Euro Double Cross. Rest assured, the twists are not annoyingly smug – they straighten themselves out after their initial jolt.

One of the more ironic twists is the inclusion of Andy Garcia in the Eleven’s roster, who, along with Izzard, gives us the titular “13.” Playing smarmy Benedict again (the hotelier the Eleven heisted in TWELVE), slicker than an Exxon oil spill, Garcia onscreen with Pacino is a heady nostalgia – their last onscreen pairing in the ill-remembered, yet gloriously-powerful THE GODFATHER PART III.

Speaking of THE GODFATHER, Reuben paraphrases from his sick bed, “I hear cars driving up to the house, I hear Linus crying – why don’t you tell me what everyone seems to know.” The last scene reverberates with in-jokes: Clooney to Pitt, alludes to (dare I say it?) Brangelina: “Settle down, have a coupla kids,” while Pitt in return alludes to SYRIANA: “Keep the weight off between jobs.”

It might seem redundant to note, but this time round, there is much more “cheating” – by the film-makers! After describing the maddeningly precise security systems, when Pitt pays off a concierge or when Caan replaces a dumpling with a spiked one, suddenly those security systems see nothing. The security is impossible to subvert when the Eleven decry it, but when they have to actually “get away” with something, the security is as useless as it is in the real world.

I was glad the chicks were M.I.A. – Julia Roberts and Catherine Zeta-Jones; there are one-line explanations for each, explaining their absence. (How must that make them feel? Not too indispensable, I bet.) Let’s face it – Vegas is a MAN’S town; we really don’t want the spouses sniffing around. And a heist is a MAN’S game; the only roles women ever play in heists are objects d’sex (but the Eleven have Brad Pitt for that) and maybe squeezing into tiny airducts where men can’t fit (and the Eleven have Shaobo Qin for that – the diminutive Chinese acrobat who speaks only his native tongue yet can understand every reply to him in English).

This beyond-lavish production has renewed my faith in the ensemble power of man-toys – and it only helps that the spirit of Sinatra somehow imbues this entry more so than even ELEVEN (2001). I wrote that THIRTEEN would be the new Zero. It’s not – so maybe FOURTEEN will be the new GODFATHER PART II.

Make me wash my mouth out for that…