Sesame Street is having an aneurysm over this movie’s slogan: “Twelve is the new Eleven.”

Poffy Pitt: Cool as a – Cucumber! 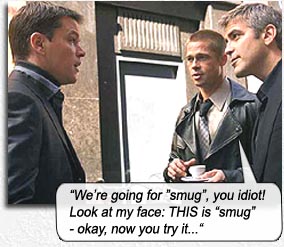 Having nailed the formula down pat with OCEAN’S ELEVEN – ridiculously implausible action and pulp coincidences, snide and smarmy rock soundtrack (evoking a Guy Ritchie élan), smash-cuts and wobbling steadicams, overlapping, smartass dialogue, and A-List megastars glutting all 70 millimeters of the widescreen – director Steven Soderbergh now hurls OCEAN’S TWELVE at us like an elitist upper-class Molotov cocktail and hopes we don’t run screaming into the sallow beigeness of our mundane, everyday lives.

Filled as it is with man-toys (from George Clooney‘s too-hip instigator, Danny Ocean, to Matt Damon‘s stuttering novice, Linus, to Brad Pitt‘s glib Tyler Durden franchise, here named Rusty Ryan) and toy women (the stunningly rapturous Catherine Zeta-Jones as Rusty’s ex-sex, Detective Isabel, and the stunningly bland Julia Roberts playing Tess, Ocean’s spouse), we find the camera righteously slewing all over creation trying to cram them all in, making for a movie so self-aware of its megastar cheese-wattage that it can’t quite get over its own smugness.

There is something intrinsically twisted in a society bulked with middle- and lower-class peons, who would patronize a film centering on the illegal exploits of upper-class thieves, tolerating the hijinks of these outlandishly enabled hedonists for the very fact that they are too rich to be stealing for necessity in the first place.

The megastars quickly exposit why they should all go to Europe for this film (besides to annoy those of us trying to EARN a living): the casino entrepreneur whom they heisted in OCEAN’S ELEVEN, Benedict (Andy Garcia, foreboding as always), has located them all and craves payback – with big vig – so off they traipse to heist Continental rich men for the funds. ROBIN AND THE SEVEN HOODS this ain’t – the rich robbing the rich to pay the rich. See, lower-class peons, how it all works out for everyone?

Thus does malarkey ensue. When their first Euro heist requires a cable shot that cannot be made from one building to another due to the second building being too low, instead of chipping away at the ramparts of the first building, or taking a shot from a lower window, these monumentally-thick thieves opt to raise the second building 18 inches (via underwater pylon-jacks) to achieve their goal. If you sat in your seat without batting an eye during this incomprehensibly-gratuitous sequence (which would have realistically put Ocean’s crew so far into the red financially that they’d be selling their suave man-behinds in Amsterdam just to pay for the plane tickets home), the rest of the plot would make complete sense.

If, on the other hand, you are not in the 1-percent of super-thieves currently trawling the French Riviera billionaire circuit, or if you have not the faintest clue where to purchase building-raising pylons with digital leveling readouts, the plot will become one sad contrivance after the next, magically twisting in on itself whenever it wants to pull another double-con on its audience.

In touch with reality about as solidly as Michael Jackson, the movie’s prime directive is eventually established – a thievery competition between Ocean’s Eleven and acclaimed Euro thief, the Night Fox (Vincent Cassel, suitably Continentally Charming-yet-Treacherous).

The competition’s Prize is housed in a museum room rife with laser fields – which begs the question: when is a security company going to produce a laser field that actually encloses the object it is guarding? From ENTRAPMENT (where Zeta-Jones herself breaches a laser field), to JAY AND SILENT BOB STRIKE BACK, laser fields only exist in movies to illustrate how pragmatically they can be breached, and are as much a hindrance to super-thieves as geriatric rent-a-guards.

With a climactic soundtrack lifted from Iron Butterfly’s In A Gadda Da Vida, the grand double-triple-con goes into effect – with Julia Roberts suddenly playing Julia Roberts, Bruce Willis suddenly turning up and playing Bruce Willis, and everyone else getting arrested and clanked into a cell, isolated from any real perps lest their luscious posteriors suffer the brunt of caged man-lust.

Ultimately, Ocean and the Night Fox face off to explain to the addled audience (replete with crash-cut visuals) the obvious discrepancies and plot holes that we want to slap the screenwriters over. After the Night Fox gets his Bond-Villain on, revealing his methods in heisting the Prize – including a scene of break-dancing through that vaunted laser field – Ocean accounts what really transpired during the heist. Suddenly it’s RASHOMON with man-toys.

As in this film’s predecessor, seems like a heist can only be pulled off successfully in past tense. (Clooney should wipe that smirk off his face before someone slaps it off.)

As for the two women in the mix (Isabel, out to bust Rusty’s taut butt, and Tess, incessantly prodding Ocean to renounce thievery) – seems they were only hounding their men until a big enough heist brought in enough income to reconcile them with Crime being a viable vocation. The final scene sees all these megastars partying around a poker table – which speaks volumes about the vapid principles that the women supposedly stood on. Sure, their men have “sworn off crime” for the moment – but they’re Duplicitous Criminals! What else are they gonna do once the champagne and cheese dip are cleared?

In moving out from under the daunting yet protective shadow of Sinatra’s ELEVEN, Soderbergh’s TWELVE was less financially-successful than its predecessor. In deference to this genre’s trend, all the bombast, hyper-realism and implausibility must necessarily be ratcheted up on successive sequels, thereby we can rest assured that, although Sesame Street may cringe in anguish, “Thirteen will be the new Zero.”