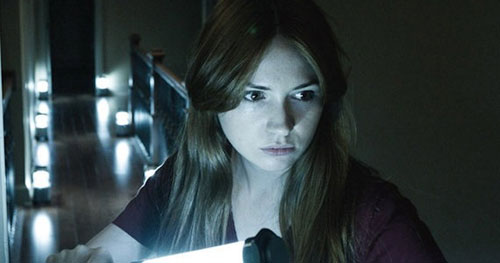 Not your average horror flick: NOT walking around in the dark.

It’s all done with mirrors!

A haunted mirror. A spinner redhead. A ship’s anchor. Things in a chilling, original, truly eerie horror movie. Is it real, or is it OCULUS? There is no escape from what you think you see. Kinda like TMZ.

Feisty Kaylie Russell (Karen Gillan) tries to destroy an antique mirror from her childhood, claiming it was the cause of her parents’ insanity and their violent deaths. She enlists the aid of younger brother Tim (Brenton Thwaites), recently released from a psyche ward for being hunky. 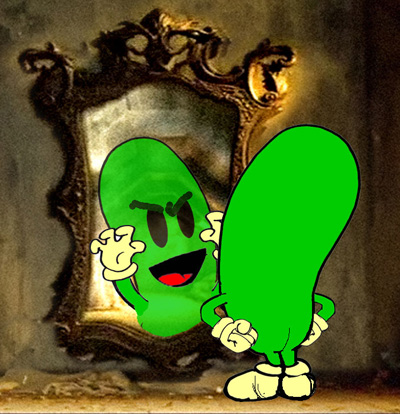 Kaylie has traced 45 mirror-related deaths back two centuries, up to her parents’ deaths, and this is where the film slips up slightly: she’s too clinical. As she documents her exhaustive research on video – which is commendable for its scientific method – we ask whether she had to do it all at once in this grandiloquent exposition-fest. Her manner is officious, she is overly talkative… But that hair! She knows. The filmmakers know. And YOU know as well. Those firestorm follicles – we’ll forgive damn near anything for a frolic in those lubricious locks. You wanna talk shop? Talk away, flamey!

Directed and co-written by Mike Flanagan, OCULUS comes at us with a plausible, scientific tone (which is why it obviously failed at the box office – people are idiots). Kaylie doesn’t arbitrarily accuse “the mirror” of killing people, but of some kind of influence the custom glass might have had on its owners, stating that the word “supernatural” has no place in a scientific study like this, but speculating that there might be inexplicable forces at work that she might not have any other name for. And look at my hair.

Hunky bro is the skeptic, having been brainwashed by The Man in an institution, all imagination leached out of him, so trying to conform to platitudinous “I am okay, everything’s okay” standards. Though he was also terrorized by the mirror as a child, ten years in an institution has occluded his fearful memories. They say he’s cured – but they’ve repressed him more than ever. (Kaylie: “You were normal when you went in – now you’re a nutjob!”)

Kaylie sets up an isolation room with cameras, computers, alarms, food, regular phone calls to her fiancé, and an anchor jerry-rigged to fall and smash the mirror if she doesn’t reset it at regular intervals. Now – I know what you’re thinking: If this mirror is as malevolent as she thinks it is, why not smash it RIGHT NOW? The answer is simple: no matter how many precautions Kaylie thinks she has taken against the mirror, it is already inside her mind; has been since she was a child… 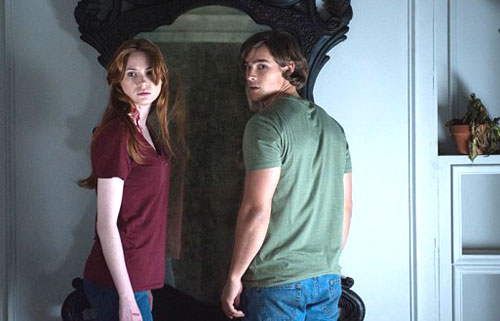 I’m too sexy for my reflection…

Movie freely jumps back and forth in non-chrono order, showing Kaylie and Tim as kids (played with excellent terror by Annalise Basso and Garrett Ryan), where we see the fatal effects of Kaylie’s father bringing the mirror into their new home. (Rory Cochrane plays dad, whose casualness reminds us of Ron Livingstone from OFFICE SPACE.) Mom goes nuts by looking into the glass (Katee Sackhoff) and dad (who has also gone nuts with the mirror in his office) shoots her – and Tim shoots dad. And then goes nuts via natural means. Off to the institution.

It might seem like a gore-fest but it is not. It’s a classic horror tale that eschews serial killers (unless you count the mirror), avoids gore (unless you count the anchor through the skull), and is devoid of jump scares! That’s right, a modern psychological thriller with no bleating orchestra stabs whenever things appear unexpectedly from offscreen.

Let’s define “jump scare”: a moment when tension is ramped high and something happens suddenly that you think is sinister – but it’s just the cat. A jump scare is a fake scare. Usually accompanied by an orchestra stab or an impact sound. The scares in OCULUS are actual scares. If you see something out of the corner of your eye – you really did see it. And it wasn’t the cat. And no impact sound will alert you to it. It’s subtle, and all the more chilling.

That is why the OCULUS trailers are so annoying and misrepresentative. Exactly how many impact sounds can you put into a two-minute clip before our ears fall off? Marketers. Aka douchebags. Yet they are only a reflection (Hah! Get it?) of this ignorant culture that mistakes horror for “gore” and “jump scares.” So they play to that redneck market, because there are so few people that appreciate true horror any more. (Yet how to account for one reviewer criticizing this very movie for being filled with jump scares? I’m guessing he just viewed the trailer and thought he could pass it off that he’d seen the movie – like so many low rent reviewers…)

Claustrophobia kicks in when we realize that no matter the precautions Kaylie has taken against being duped by what she thinks is reality, she can never be sure what reality is. Illustrated perfectly when she and Tim are arguing about smashing the mirror and suddenly find themselves outside. They rush back inside only to find that the cameras pointed at the mirror have all been moved to the middle of the room. She reviews the computer video – and it shows them moving the cameras to the middle of the room themselves while arguing – which they cannot remember doing!

This kind of psychological terror infuses OCULUS until we are as discombobulated as Kaylie’s fiery sexy locks and her brother’s fiery sexy muscles, one of the most unsettling scenes showing her confusing a light bulb with an apple. Jangling primal fears. No phone, no lights, no motor car, not a single lux-u-ry, like Ro-bin-son Cr-u-soe, it’s primitive as can be — hang on! What am I doing on GILLIGAN’S ISLAND?

1) All the “ghosts” in OCULUS have white points of light in their eyes, to differentiate them from the living. It’s unfortunate this device is necessary for the lombards in the audience who need gore and serial killers to understand a horror movie. A ghost doesn’t need to have glowing eyes or worms dripping from its mouth to be scary. The very fact there is an inter-dimensional alien presence in the room should be enough to scare the panties off you.

2) Ghosts in 2014 still have the decency to wear clothes – because, of course, clothes have souls too. Remember darling, ghosts want to terrify you – but heaven forbid they embarrass you as well!