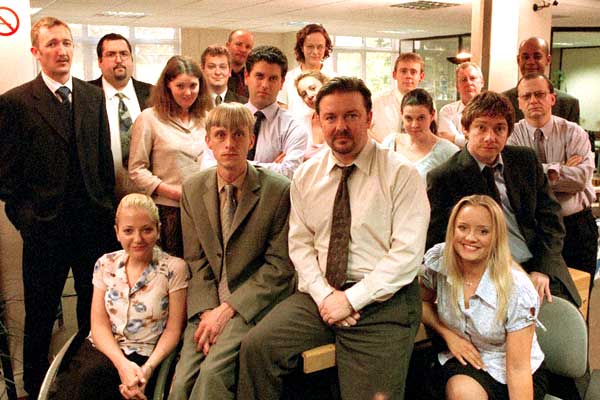 Genius Ricky Gervais forges one of the greatest comedy series in history, co-writing, co-directing and starring in THE OFFICE. No punchline required.

Before we proceed with this joyous excursion into comedic venality, let us clarify the world in which we live in (thank you, Paul!): there is only *one* THE OFFICE. That is: Ricky Gervais’s and Stephen Merchant’s astounding British import. There is no “American version” of THE OFFICE; there is something mutated and ugly and autistic and amateurish and writhing in plagiaristic puerility (albeit authorized and executive-produced by Gervais) that has the unbridled audacity to term itself “The Office,” featuring beige Steve Carell, whom marketers have to continually remind us is funny. But that flailing debacle is not THE OFFICE. There is only one THE OFFICE.

THE OFFICE uses the format of the “reality show” to frame the incredible writing and seemingly mundane plotlines that yield explosively funny situations, in a paper supply business run by an insecure, self-aggrandizing, duplicitous office manager named David Brent (Gervais).

Filmed exclusively on hand-held cameras, with the premise that this footage is for a documentary, the most dazzling aspect of this series is that it is meticulously scripted, even though the naturalistic performances seem improvised; the cast is uniformly brilliant in their perfect timing and talking head spots.

The pathos and simultaneous beating heart of THE OFFICE is David Brent, a character so vile and dishonest, so venal and petty, that if he were real, you would either studiously avoid him or kick his head in. But the genius of Gervais (and co-writer/director Merchant) is in making Brent (who is admittedly a composite of people they’ve known) such a lovable lump. It is his insecurities and uncomfortable attempts at connecting with people that drives each episode. All comedy is pain. And David Brent brings the pain.

It’s ironic and annoying that every new American comedy series is erroneously and impertinently compared to Monty Python, while THE OFFICE is a British comedy that is blood-linked to Python due to their cultural pedigree, but are too classy to mention the link. Because they are nothing like Python (as all the American “comedy” shows are nothing like Python). The only American show that comes close to the nuanced ugliness/hilarity of THE OFFICE is – no, not the stillborn American OFFICE, that lacks any heart at all – Gary Shandling’s brilliant THE LARRY SANDERS SHOW.

THE OFFICE is almost a mockumentary, almost a tragicomedy, almost a reality show, and definitely the funniest thing to come out of Britain since… well, since Monty Python. 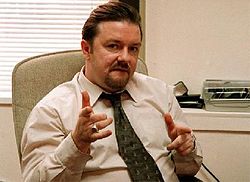 The first spark of brilliance, that becomes apparent only in retrospect, is that all the characters in THE OFFICE are fully formed from the first minutes they appear onscreen. No matter which episode you watch, from Season One or Season Two, there is never inconsistency; the creators and actors know these characters so well it almost is a reality series.

In the first few minutes, Ricky Gervais immediately shows us Something New as David Brent; a melding of John Cleese and Jim Carrey, as he hires a forklift driver while trying too hard to impress the driver with his largesse.

The comedy universe is shaken. Brent is a trope we all know from real life, yet performed here with such lethal conviction, he is a character we’ve never seen so clearly before. For all his bluster, he is a sad clown; irritating to be around, yet pitied for his incompetency in human relations. The comedy is subtle, intelligent, deadpan, inexplicable.

The camera holds past the zingers, way past the supposed punchlines, gouging out uncomfortable silences and painful wondering-what-to-do-with-oneself. That gutsiness separates THE OFFICE from all its inferiors.

We meet secretary Dawn (Lucy Davis), a plump cuteness who doesn’t quite know how to tolerate Brent. Sales Rep Tim (Martin Freeman), bored out of his mind and staying sane by teasing fellow rep Gareth (Mackenzie Crook), who takes his post as “team leader” uber-seriously, reminding us of his credentials in the “Territorial Army.” Elegant and smoking hot regional manager Jennifer (Stirling Gallacher) brings news to Brent (who can’t stop looking at her legs) that there will be redundancies (firings) as one of their branches is closing down.

We come to learn the company is called Wernham-Hogg, located in Slough, apparently a bleak suburb in Berkshire held in disdain. And everyone seems to be doing actual boring monkey work. We also discover a tentative chemistry between Dawn and Tim and realize immediately it is unconsummated with the appearance of Dawn’s working-class boyfriend Lee (Joel Beckett), a forklift driver in the warehouse.

While Tim plays petty jokes on Gareth, baking his stapler into jelly (Jell-O to Americans), Brent is intent on trying to convey to the camera crew that the office is rolling in laughter provided by him (as resident comedian and personable drunk), and a practical joke on Dawn goes awry when he tries to prove this. And as we laugh until we cough and sputter, our analytical minds continually marvel at the way THE OFFICE lands on the dark side of comedy rather than the sad side of revulsion for this dubious character.

Each episode has a “stinger” so keep watching until after the credits. 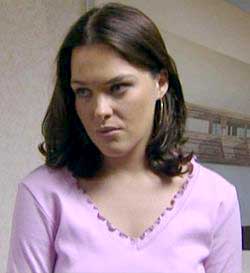 Brent’s best friend’s daughter, sexy Donna (Sally Bretton), floats around the office for work experience, which causes a testosterone stir. Brent and Gareth puff out their chests and advertise their masculinity in their own ways – both as subtle as beating her over the head with a club: Brent as the joke-telling cool guy, Gareth as the territorial army soldier, wearing a gun holster to work to carry his mobile phone.

Speaking of testosterone, a Photoshopped picture of Brent as a woman with two men jizzing on his back circulates the e-mail system, and Brent assigns Gareth to find the culprit. Gareth’s first task is to decide on the correct signage for his ad hoc “office” to interrogate suspects.

While practicing the moonwalk and robot dancing with Tim, Brent is visited by regional manager Jennifer, who asks him for five changes he’s made in the office to improve productivity. Brent replies, “I’ll give you three and another two if you need them.” 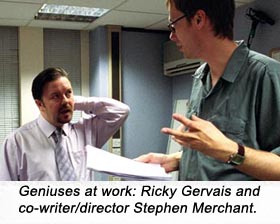 Tim’s 30th birthday, questioning his future while wearing the Hat-FM cap that his parents gave him.

We meet roving sales rep Chris Finch (Ralph Ineson), a life-of-the-party loudmouth whom Brent believes is his best mate, but who only uses Brent as a foil to bully. But Brent uses “Finchy” to his own ends, vicariously feeding off Finch’s confident bluster.

Brent continues a running commentary with young Ricky (Oliver Chris) on Dostoevsky, for which he must keep running back to the internet to check his facts before trying to impress Ricky with his “innate” knowledge.

Brent and Finch have won the office quiz contest six years running. Calling themselves The Dead Parrots (a nod to Python, of course), they are sore losers, bad sports, and great cheats. When they lose the intellectual competition, Finch announces that the final challenge is throwing a shoe over the building to decide the winner.

Wedding plans for Dawn and Lee, to the chagrin of Tim; well, their birthday gift to him of a giant inflatable cock should ease the pain. 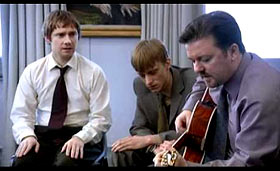 Staff training day, with Brent intent on proving he is more experienced and qualified than the trainer, insisting on doing his Basil Fawlty impression when called upon to demonstrate customer satisfaction.

When Brent pulls out his guitar, it’s all over. He could have been a rocker, he says, could’ve been On The Road right now, yeah man; chose the paper industry instead. Gareth soaks it up vicariously, providing the guitar and some unneeded backing vocals when Brent breaks into his original songs.

Dawn and Lee break up, as long-suffering Tim watches from the sidelines. What he doesn’t see is them reconciling. Then – in full view of all the office staff, he girds his loins and asks Dawn out – after she has made up with Lee. Awk-waaard.

Brent serenades Dawn to ease the pain. With Gareth on backing vocals. 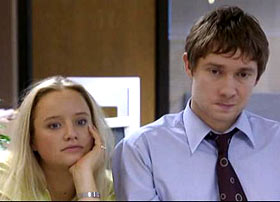 Even though his office is staring down the barrel of redundancies, Brent hires a new secretary, who had all the qualifications necessary for the position over the well-dressed gentleman who applied – she was cute and blond.

Tim resigns because, as big Keith (Ewen MacIntosh) affirms, “You embarrassed yourself with her, didn’t you?” He wants to move on to become a psychologist, to which Gareth asks, “What do you want to be a psychiatrist for? They’re all mad themselves, aren’t they?” While uncomfortable silences arise between Dawn and Tim, Gareth tries it on with Donna, through the cunning facade of training her in Health and Safety.

The subtle handling of Tim’s and Dawn’s “romance” is poignant. We feel their longing in the shots of Dawn’s face and Tim’s discomfiture; it’s one of those great unanswered riddles, like Sam and Diane in CHEERS, Tony and Angela in WHO’S THE BOSS?, Adam West and Burt Ward in BATMAN…

Brent ends the episode reading a John Betjeman poem about the shortcomings of Slough. “And they made him a knight of the realm! Overrated!” 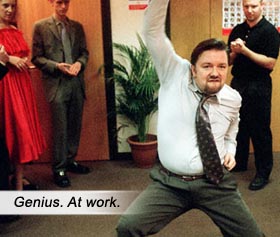 As the series opened with David Brent hiring a forklift driver, it ends with Brent firing the same driver (same actor); the discussion devolves into the differences between midgets, dwarves, elves, and goblins.

More than willing to betray his staff, whom he promised he would stand by, Brent ultimately fails the medical for his promotion and then makes it seem like he stood by his staff by “faking” high blood pressure to fail the medical.

As hilarious as this scenario and these scenes are, with Brent talking his way in circles, it is scary to realize that this is how politicians sound when asked direct questions. And that’s why we hate them. Why then, don’t we hate David Brent? His garish displays of unapologetic selfishness and duplicity remain darkly funny to the end.

The staff throws a final party where almost everyone gets laid, even Gareth. Tim decides to stay at the office due to a promotion, and starts sounding like Brent in his rationalization of why this choice is better than pursuing psychology.

Final Words: Brent: “I don’t do it for the laughs, or the money or the fame. I do it because one day someone will go, ‘There goes David Brent. I must remember to thank him.'”

Well, for entertainment above and beyond the call of Python, thank you, David Brent. Thank you so bloody much.