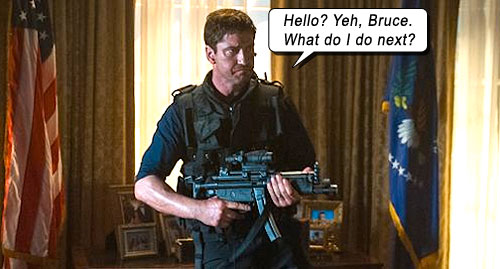 DIE HARD in the White House.

OLYMPUS HAS FALLEN but don’t worry – John McClane is there to– I mean, Gerard Butler is there to pick it back up again.

North Korean terrorists take over the White House, and Secret Service Black Ops Special Forces Seal Team Ninja Mission Impossible Flames-Comin-Out-De-Side Agent Gerard Butler is the fly in the ointment, the spanner in the works, the McClane in the Nakatomi.

The problem with a film of this ilk – White House overrun and President taken hostage – is the foregone conclusion. The terrorists can’t win – not against the White House and the President. They just don’t make movies in America like that. Even if a film with that conclusion ever got funding, it would never be released. Not to worry, patriots: the shot of the bullet-riddled American flag unceremoniously dumped off the White House roof in slomo is a cinematic gimmick. Does anyone believe that flag is going to stay off the roof for very long?

So even though the opening scenes are breathtaking – the president’s car going off a bridge, the bomber attack on the White House, the Washington Monument crumbling – the plot is inconsequential, held up by its brutal action, blood-drunk violence, and audacious twists. It’s R-rated for its constant swearing and gruesomeness (heavy artillery fired into humans, shredding their torsos, point-blank head shots, etc.), but it necessarily has to ramp to hyperbole, to distract its audience from that foregone conclusion.

Funniest scene is when rocket-propelled grenades and heavy artillery are being fired directly into the White House front door and secret service guys are simply running out like video game characters directly into the line of fire with their guns drawn and being mowed down. Musta missed that class on Taking Cover; probably trained by the Emperor Palpatine for his elite Stormtrooper detail. 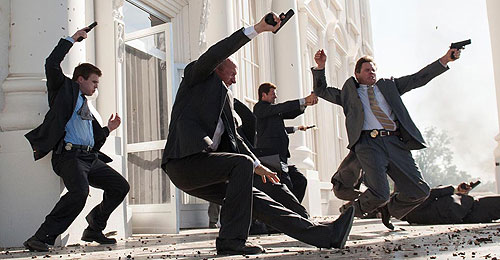 DIRECTOR: ”Hey guys, just get shot and fall over, no need to do the Safety Dance.”

OLYMPUS just makes us question why anyone would want to take over the White House in the first place. What do they hope to achieve? Do they want to run America? Shyeh, good luck with health care and immigration reform, terrorists! You deal with those asshole Republicans… As it happens, terrorist leader Kang (Rick Yune, DIE ANOTHER DAY) just wants American troops out of his country. After 60 years of having American installments there for no reason other than belligerent threat, I think that’s kinda fair, don’t you? Uh-uh. Not gonna happen. Reason: America dicks so big and strong, ooouwah!

OLYMPUS is just another parable for the American people to ignore. No matter that the startling amount of nukes America has aimed at the world is itself a vulnerability if someone were to take over the firing system and blow them up in your own house; it’s the same concept as having guns around your house with a toddler who can access them.

No listen. No cry.

It might be the serious version of WHITE HOUSE DOWN (Jun 2013), but OLYMPUS HAS FALLEN is every bit as comedic as that film.

Aaron Eckhart is the Pres – wha–? A white president? I’m sure a lot of young kids are scratching their heads watching this strange fiction. When the Pres and VP cowardly retreat to the safety of their bunker 120 feet below ground, Morgan Freeman (as Speaker of the House) takes over as acting Pres. Okay, we can relate again.

Dylan McDermott is Butler’s smarmy secret service pal. Perfect-featured Radha Mitchell is Butler’s inconsequential wife (for reaction shots outside the fray, and to have someone whose arms he can rush into at the end). Melissa Leo is the tortured Secretary of Defense who refuses to give up some McGuffin code. And Angela Bassett does Glenn Close in AIR FORCE ONE and acts the shit out of talking into an intercom. Ashley Judd dies early, and General Robert Forster argues with the black president.

In an obvious misdirection scene, the terrorists put black hoods on a group of hostages and walk them into a helicopter, the president supposedly amongst them. Helicopter takes off, explodes. Omigod! President dead too?! Nope. Not gonna happen. American movie. CAN’T happen. The censors will not allow it.

Final scenes, consult happy ending flow chart. As orchestra swoons behind him, white president gives Speech No.7 from the Flesh-Crawling Speeches handbook that Morgan Freeman flipped through in DEEP IMPACT.

“Our foe came to desecrate our way of life…” — oh, not like you desecrate all those other ways of life around the globe. You are not in ANY WAY regarding this White House attack as blowback for your troops in other countries; there is NO POSSIBLE WAY America might be ethically wrong for aiming so many nukes at everyone else. The very fact that your code name for your leadership headquarters is “Olympus” bespeaks your insidious arrogance and hubris and utter lack of humility. Owning the biggest arsenal in the world doesn’t mean you are the smartest, strongest, or even most worthy to survive into the future. It just means you have the biggest dicks and the smallest brains.

2 Comments on “OLYMPUS HAS FALLEN”