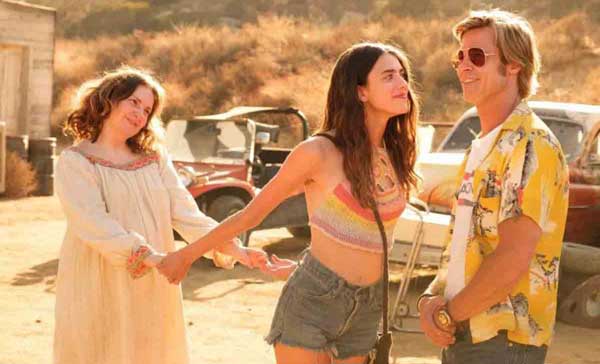 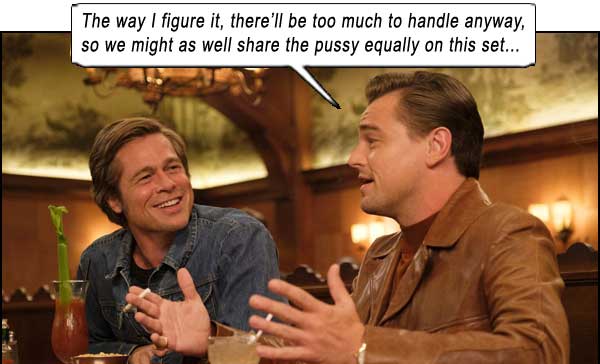 A film that takes us somewhere, yet goes nowhere.

Quentin Tarantino once again brazenly rewrites history in his scintillating homage to La La Land of the 1960s, ONCE UPON A TIME IN HOLLYWOOD.

Hollywood 1969. Two tales intertwine – one, a tale of an actor and his stuntman, hustling for work in a business that has moved past their cowboy attitudes and advancing ages; the other, a tale of a rising young starlet going somewhere, while her throughline goes nowhere.

And that’s the small gripe I have with this meticulously made film: a little less homage, a little more story.

Writer-director Tarantino paints two fictional characters from scratch and portrays one real life character; the fictional pair are actor Rick Dalton (Leonardo DiCaprio) and his stuntman bro Cliff Booth (Brad Pitt, as leathery and runneled as Tommy Lee Jones), while the historical character is Sharon Tate (Margot Robbie), who is connected to real life acquaintances that would scar history forever – the Manson Family (portrayed as peripheral characters, including a lookalike who could be a young Liam Neeson or, I’m guessing, Charlie Manson).

Tarantino also re-dresses Hollywood the town (either in CGI, practical effects or a combo of both) in the glitter gown it wore in the ‘60s, from the shop facades on Hollywood Boulevard, to the car models from that era, down to the street signs, bus shelters and billboards. And credit where it’s due – that effort in itself is a stunning achievement!

However, Tarantino seems to have lost his throughline in chasing his art. Firstly, only movie-philes would know or care that he has brought 1960’s Hollywood to life so fastidiously; secondly, he spends way too much time with eyes on Sharon Tate. Movie might have benefitted had Tarantino simply followed the two buddies (with their own compelling narratives), because by inserting Tate and rewriting her as a survivor of the “Tate Murders,” her appearance in the film is meaningless to any cinemagoer with no knowledge of her real history (victim to the Manson Family, that murdered five people in Roman Polanski’s Los Angeles home in 1969), and she ultimately becomes nothing but a red herring to those who do know the history. Tate happens to be Rick Dalton’s neighbor, therefore a motivating subplot for actor Dalton, who craves to make contact with Tate’s director husband, Polanski. After the film’s climax (in which Tate is not involved), she appears as a concerned neighbor, in the smallest of comedic payoffs.

That being said, allow me to commend IN HOLLYWOOD for its sudden, savage climax – one of the most satisfying payoffs in cinematic history, with Brad Pitt pulling out his big dick for the type of studied gore-ballet that Tarantino is renowned for. The crafted gutshock blunt blow to our skulls doesn’t get any better. It’s Hero Time.

Most women have to be held back when confronted with The Pitt.

Like the two films that inspired its name (ONCE UPON A TIME IN THE WEST and ONCE UPON A TIME IN AMERICA, both directed by one of Quentin’s heroes – Sergio Leone), ONCE UPON A TIME IN HOLLYWOOD is a tale about a few connected characters set against the backdrop of a kaleidoscopic cultural sprawl. Definitely a passion project for Quentin (who admits 1969 holds a rose-colored grip on his youth), movie is a pastiche wrapped in a homage and doused liberally with roman a clef, packed with Easter eggs, classic rock, in-jokes, and parts for all his brahs.

There’s ice-cool Timothy Olyphant and ice-veined Michael Madsen as cowboys, Kurt Russell as a producer (and narrator), stuntwoman Zoe Bell as his wife; there’s even Bruce’s daughter Rumer Willis and Kevin Smith’s daughter Harley Quinn, as Manson cultists. Leo, of course, did DJANGO, and even Pitt has crossed paths with Tarantino before… remember Floyd the stoner in the Tarantino-penned TRUE ROMANCE? “Don’t conden-send me, man! Fucken kill you, man!…”

Al Pacino is producer Marvin Schwarz, who steers Dalton toward spaghetti westerns out-of-country, to build an overseas cache and return a hero (a real life gambit that rocketed none other than Clint Eastwood to stardom); Margaret Qualley is Pussycat, a free spirit who tempts Booth to the cult; Bruce Dern is old George Spahn, who allows the Manson Family to camp at his Spahn Movie Ranch (which features in the other prime scene of the movie – Booth visiting the eerily stagnant Ranch and talking his way through the ominous female hippies to visit old George, who may be… dead? prisoner? worse?…)

Martial artist Mike Moh plays Bruce Lee (during his Kato period in THE GREEN HORNET), comparing dick size with Cliff Booth on the set of a movie. Booth ends up getting kicked off the set for beating up Lee. Now that’s just wrong. No matter how funny or artistic license the scene is – no one beats up Bruce Lee! 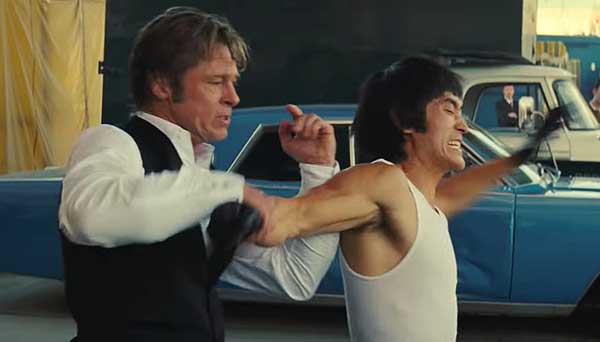 Rare picture of Bruce Lee at one of his Fight Club meets.

The primo performance in this movie is Leo. His Dalton looks haggard, old, he’s coughing, smoking, clearing his throat, he has a slight stutter (which is beautifully played by DiCaprio, not as a full-blown “b-b-b-but” type of impediment, but an occasional slight hesitation when he is talking to people in uncomfortable situations), his usually pretty eyes are bloodshot with lack of sleep, but also with the knowledge that every hour he rests is one less hour he is spending trying to stay on top of a profession which is leaving him in its wake. Though he’s starred in his share of TV serials, his confidence as a viable leading man is waning, because he cannot get the breaks to transition to the big screen, (like Steve McQueen and other contemporaries).

On the cusp of a new decade, Dalton feels aged and used up, realizing the movie industry is No Country for Old Men. And we are in the fibers of his being and suffering with his soul through his existential crisis. And I personally feel every bladed inch of his anxiety; that character – is ME. And I’m guessing a lot of YOU as well…

His crisis is brought to a head when he meets a precocious little girl on set (an outstanding performance by young Julia Butters, who is reading a book where the hero feels the world has moved on without him. Dalton confesses “I’m more useless every day,” and breaks down in tears in front of her.

Tarantino is transmitting directly into my darkest limbic fluids, that place where hope goes to die, my sunken place…

While Dalton is Acting The Shit out of his angst, Pitt’s Booth – also in the autumn of his career – comes across as still vital and more in touch with his previous power. He seems happy to flit from one odd job to the next, always the faithful second banana to Dalton, his stuntman skills serving him well in street fights, drifting, and taking life on the chin; in essence, DiCaprio has the meatier role, while Pitt has the meat. 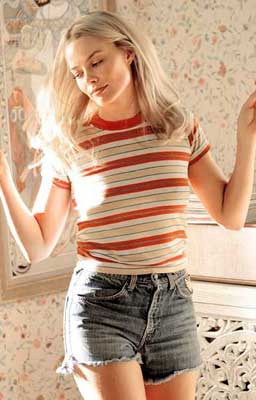 “I’m having such a good time doing nothing in this movie.”

The Rolling Stones’ Out Of Time drives us into the third act, and I found myself wondering why I was not gripped around the throat yet, which is the usual modus operandi for Tarantino films at this late stage. Also, besides Dalton and Cobb starting a new life chapter, eyes are back on Tate, and no one will fault me for thinking the Stones song is a harbinger of her doom, “Baby baby baby – you’re out of time…” (hinting that her time is up soon?). Not only that, Russell’s narration describes the people who would be the real life Manson victims moving in next door with Tate – but in this movie, they do NOT meet a tragic end, and are therefore useless to this movie’s plot, yet the narration continues this red herring throughline! Looking back on it, I’m actually getting annoyed. Technicians and actors spent days, weeks on these scenes; editors, lighting, costumes, et al, only to have this thread completely dropped when the Manson Family – led by the real life character “Tex” (Austin Butler) – skulked up Cielo Drive to start the mayhem. And Tarantino cut out all Tim Roth’s scenes for that non sequitur garbage?!

Maybe Tarantino is right, when he says he only has 10 films in him. In this penultimate one, he is finding it hard to clear his own high bar; his own legacy of leaving us breathless for weeks, months, years after viewing his iconoclastic product. Besides the compelling performance from Leo and the mantastic muscle of Pitt, this film wasted more time meandering up and down the Hollywood Hills than idiot tourists searching for the Hollywood sign.

ONCE UPON A TIME IN HOLLYWOOD, “The 9th Film from Quentin Tarantino,” definitely ends with a bang not a whimper, which flavors our exit libido, however, do we allow Quentin to skate on the body of the film being “merely great,” or do we insist on nothing less than gripping from film start to final frame?

We await Quentin’s 10th, insisting on, and anticipating, the latter…