One Cuckoo in Charge of the Rest.

Terrifying, poignant, gut-wrenching, from the acclaimed book by Ken Kesey (who hated the film version, which departed considerably from his mind-shattering novel), directed by Milos Forman (produced by Michael Douglas after father Kirk tried to get it made for years), ONE FLEW OVER THE CUCKOO’S NEST is the second film to win the Grand Slam of Oscars – Best Picture, Best Actor, Best Actress, Best Director and Best Screenplay. (The first Grand Slam film was Frank Capra’s IT HAPPENED ONE NIGHT in 1934.)

Jack Nicholson is Randall P. McMurphy, a convict who feigns insanity to get transferred from his prison work farm to a mental institution, fully expecting to shirk out the rest of his sentence pretending to be nutso. But gregarious, devil-may-care roustabout McMurphy must contend with sensual battleaxe Nurse Ratched (Louise Fletcher), who never met a man whose balls she didn’t put in her mouth – and bite off.

The first time I saw CUCKOO’S NEST as a young cucumber it disturbed me because of the patients – their actions were so alien, so “disturbed”: the idiot-smile of Martini (Danny DeVito), the painful stutter of Billy Bibbit (Brad Dourif), the nerviness of Taber (Christopher Lloyd), the horseface of Frederickson (Vincent Schiavelli), the Elton John-petulance of Cheswick (Sydney Lassick), the deaf-and-dumb mystique of Chief Bromden (Will Sampson), the waltzing man, the wheelchaired general, and even THE HILLS HAVE EYES guy chained to a wall (Michael Berryman)… As an adult, CUCKOO’S NEST disturbed me so much more – because of the insanity of the STAFF.

This subtlety is almost lost under the battle of wits between Big Nurse and Horndog Mac; Fletcher and Nicholson in roles of a lifetime.

Nurse Ratched (which McMurphy pronounces “Ratshit” in cheeky phonetic innuendo) doesn’t really care about rehabilitation for her XY-chromosome charges. In her quivering hatred of men, she would rather instigate accusatory sessions (disguised as group therapy) where the more the men turn on each other, the more satisfied she looks; she would rather keep them on the inside at any cost than let even one feel empowered enough to join the outside world. It’s chilling to realize this after watching the film numerous times and only being disturbed by the misfit men for the first half of your life; not seeing the ugly subtext staring at us like Big Nurse’s big nurses.

After McMurphy “kidnaps” the patients and takes them fishing, the staff meets to decide what to do with him, the specialists agreeing “he’s not crazy, but he is dangerous.” (I’ve always wondered why McMurphy – a con man and opportunist – would give the harbor master his real name and where they were from, and then return to dock when he had a boat at his escape disposal! This in itself should prove he is not dangerous, and he gave the patients the therapeutic time of their lives. Yet no one considers that in coming back to port, he might actually be crazy!) Nurse Ratched disagrees with the decision to send McMurphy back to prison, “It would be passing on our problems. We need to deal with our problems here.” Paint it Insecure and give it Power to abuse. Much scarier than anything the patients could possibly do.

The irony is that it takes a sociopath (McMurphy) to lead these “lunatics” down the path of normalcy, to becoming more secure, sane human beings. And McMurphy, the person responsible for their recovery, the only person to affirm to them, “You’re no crazier than the average asshole walkin’ around on the streets,” is regarded as “dangerous.”

That’s the measure of the madmen running the asylum.

Even when Ratched sees further evidence of improvement in the ward – McMurphy coaxing the men to laughter whereas they used to cower, to support causes whereas they were apathetic, to participate in team activities (Chief Bromden coming out of his shell on the basketball court) whereas they were almost catatonic – she refuses to acknowledge it, because her mission never was about rehab, nor assessing whether the men are ready to leave the institution. They will NEVER leave.

For a movie that stands as the archetype for insane asylum movies, it’s noteworthy that we never see a straightjacket.

My band played at an old folk’s day care center many times and it was as disheartening as watching CUCKOO’S NEST: meaningless music blaring through speakers while people wandered brainlessly in white suits – and that was just the band.

The lunatics have ALWAYS run the asylums. 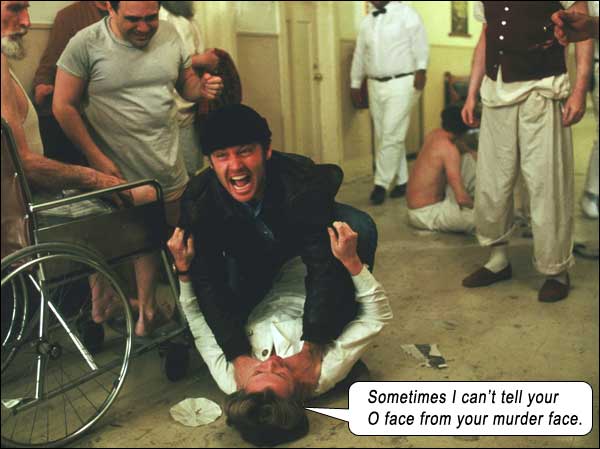 Like all broken man-made institutions – religion, health care, jails – mental wards would have started small with the best humane intentions, but are now just another madhouse.

Why else would EST exist? Electro-Shock Therapy. Shortly after Taber burns his foot and does his Peter Garrett impersonation, McMurphy gets into a fight with the “black boys”; Chief Bromden gets involved, and they are both taken “upstairs” for a 10,000-volt crown of thorns. As therapeutic as a balmy night on a Cabo beach. Again, when I was young, Nicholson’s violent spasming was the terrifying part – as he is joking with the attendants, they touch a bar to his head and his body goes rigid, contorted in pain. Viewed as an adult: this is what medical staff do to human beings they are supposedly trying to cure?!

Chief Bromden (whom we discover has been feigning his deaf-and-dumb act) opens up to McMurphy and hits the ward policy on the nail: it’s about keeping you small, and if you come in here big, they’ll keep working on you until you’re small. The seven-foot Chief tells five-foot-eight scrapper McMurphy, “You’re much bigger than me” on the night McMurphy plans his ultimate escape.

And everything gets pear-shaped.

ONE FLEW OVER THE CUCKOO’S NEST has one of those overwhelming tragic endings (like SCARFACE) where you wish wish wish for a do-over; you imagine how things might have worked out had McMurphy just climbed out that window and not been the humanitarian to Billy Bibbit, offering Candy as candy; had he not made that one small mistake, one lazy relinquishing of his guard, one instance of closing his eyes for one second too long.

The final shattering realization that Nurse Ratched is uninterested in therapeutic improvement comes for McMurphy after Billy gets laid – and without stuttering, confronts Big Nurse. She notices not at all; she does not equate his stuttering to the sexual repression it must have been, even through learning of his failed conquests in “therapy.” Her single-minded task: to drive him BACK into insecurity and fear, by chiding him for actually having sex, by threatening to call his mother; and there is irony there also – not calling his mother with joyous news that her son has made a breakthrough, but to report him for having sex, something which, McMurphy told him earlier, he should’ve been doing all along, “You oughta be out there in a convertible, bird-doggin’ chicks and bangin’ beaver!”

Even if McMurphy had disagreed with Ratched’s methods, her profession kept him at bay. After she destroys Billy (who commits suicide) and blames McMurphy (!), nothing can serve as a barrier to his rage, as he realizes her pathological greed for and abuse of power. He loses his mind as he lunges at her throat… And they take him “upstairs” where he really loses his mind…

If she can’t cut below the belt, she’ll do it above the eyes.
–from “One Flew Over The Cuckoo’s Nest,” Ken Kesey.

The fact that supposedly civilized humans can think up the practice of lobotomy, let alone perform it as “rehabilitation” is the most disturbing element of all.

Big Chief Bromden’s superhuman final act is a bittersweet uplift to a tale of abject madness.