Sea Legs in the second act. 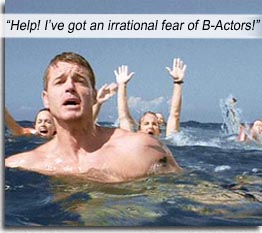 Breezed past OPEN WATER 2: ADRIFT on cable one night and stopped to watch the trainwreck, thinking, “this might be good for a laugh”… However, after the tiresome first act, ADRIFT gets surprisingly good. Surprisingly fast.

To be fair, you must know some things going into this movie. It was originally called simply ADRIFT, and not connected in any way to OPEN WATER, Chris Kentiss’s 2004 indie classic. Distributing Company avarice was behind the decision to rename it OPEN WATER 2, after that movie’s cult success. So ADRIFT suffers at the outset in looking like a cheap copy, which it isn’t. It’s a cheap original.

Three couples with absolutely no chemistry and barely any acting chops sail out to the open sea on their friend’s yacht and promptly get stranded just off the yacht when they all dive into the water without thinking to put the ladder down. Daft. Rhymes with raft.

Like its tenuous predecessor, ADRIFT is also supposedly based on a true story – of six people lost at sea. Six BORING people. Expositing like mad in the opening scenes, trying to grip some kind of credibility on who they are and how they came to be here.

If you can make it past the yammering banter of the first act, the movie suddenly engages us. Four of them dive off the yacht for a dip, leaving Amy (so aquaphobic she wears a constant lifejacket) and Dan onboard. When Dan grabs Amy and pulls her overboard as a joke (to scare her out of her fear of water) the six friends realize there is no way back onto the yacht.

It’s as simple as that. The movie is suddenly disturbing and horrifying and primal all at once. And let’s face it: stranding these people in the water was what we came to see – so no sympathy from US.

As they try everything conceivable to get back on the yacht, their situation grows more strained; panic sets in, accusations, arguments, people injured, the plot device baby cries, a boat goes by with drunk topless chicks waving at them, not realizing their plight. James sustains a skull fracture – this event leaves us shaken, as we feel the full weight of helplessly floating there with no prospects of rescue, while blood pulses out of his ear, as he remains as calm as possible not to exacerbate the pain of his head being broken.

There are genuine moments of numbing terror in ADRIFT, when we realize how close we are to death even in this technological world – something as silly as not putting the ladder down before jumping off a high yacht deck is the difference between having a future and slowly starving to death or dying from exhaustion in open water.

Like OPEN WATER, ADRIFT is most definitely a one-note indie, yet playing that note well, crashing tension against fear in a wholly natural situation, not stooping to helicopter explosions or villains with guns, or even shark attacks.

Amy’s unnecessary backstory and flashbacks are straight out of Movie Writing for Dummies. And ADRIFT starts drifting away from our interest once again.

The ambiguous ending mistakes us for people who care more than we actually do by that stage.