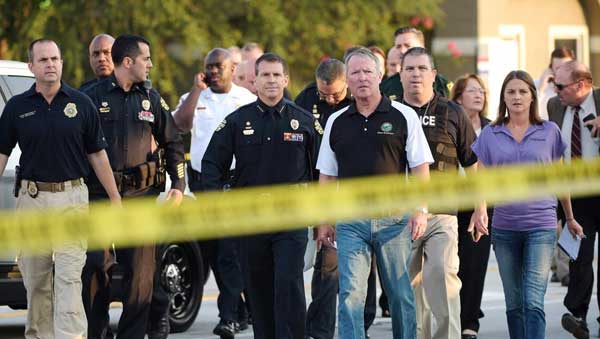 GUN CONTROL | First, The Right Children Have To Get Shot…

The Republicans are against a vocal minority controlling the vote. Why then, do they let the NRA do it?
— Trevor Noah, “The Daily Show,” June 2016

Nothing will get done.

The next mass shooting, whether it be at a movie theater, a nightclub or a school, will be an unmitigated tragedy. The incident will only move the moribund American Congress to action on gun control only if the right children get murdered.

What do I mean by the “right” children? Well, children of Republicans, of course. (Pun intended or not, it still rings true.) Only when those gutless money-fucking prostitutes that are beholden to the NRA are directly affected by any adversity do they act towards alleviating it.

As soon as news of another mass shooting is publicized, Republicans reach into their capacious ass holes and pull out their Second Amendment Talking Point. Even though it has nothing to do with anything. Because their child/wife/brother/relative was not murdered in that shooting. What needs to happen is: the kids, nephews, grandchildren, direct relatives and friends of Republicans need to get shot. And some Republicans as well. I am not advocating a mass shooting. I am merely stating that when the next one invariably comes along – which it will, because of the bona fide cowardice of the American people in the face of the gun lobby – the children of those Republicans most crucial to passing gun control bills need to get shot for congress to pass those bills. Murdered brutally. I’m talking pieces of brain and breast meat flying through the air and staining some Republican mother’s modest blouse. What we need is a gaggle of Republicans huddled somewhere – armed to the jugular with concealed weapons that they cannot use due to speed of attack, lack of expertise, and/or unforeseen circumstances – to all be shot dead like the pack of inhumane scum they are.

THEN let’s see what their surviving compatriots have to say about controlling the callous sales of assault weapons to American society, and/or into the hands of people unfit to purchase them. And do we heed their cries of sensibility then, when up to that point all they displayed was the lowest form of moral turpitude in support of cold-blooded murderers? 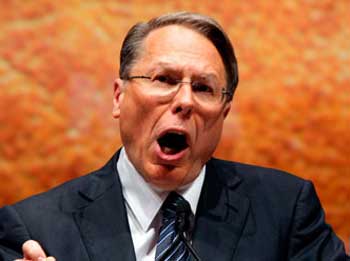 Wayne LaPierre:
when your child gets shot, this man condoned it.

For something to get done, unfortunately, these innocent people must also meet their deaths at the hands of an arbitrary gunman – the closest familial relatives of the gun lobbyist’s most infamous pig-snouted harlot, Wayne LaPierre. Again, I do not wish the deaths of LaPierre’s relatives or friends per se. I am saying that if something is ever going to get done in complicit American coward society, THOSE are the people who need to get shot for that something to get done.

Better still, what would happen if that succubus swine stain, Wayne LaPierre himself, were shot in the head? Not dead, mind you – just injured. Like Democratic Congresswoman Gabby Gifford in 2011. Injured in such a way that he sustains chronic brain damage (like Gifford), has slurred speech for life, cannot walk or use his genitals for a good length of time, and must claw his way painfully upright just to take a piss like a normal human being. Just like Gifford. Would we then see some kind of rational attitude toward gun control and the poorly-worded Second Amendment?

The whole world can be gunned down in a hail of military-grade weapon fire. It won’t make a lick of difference to the mongrels in the ferret-witted American Congress suckling at the black teat of Satan’s whore, Wayne LaPierre.

But wait until the right children get shot. Wayne LaPierre, I sincerely hope they’re yours.