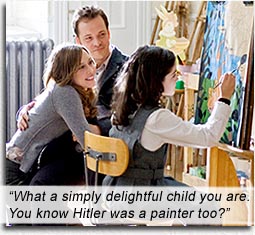 Kids are scary to begin with. Little adults with big heads who pretend they don’t know what we’re saying. They’re like clowns: some people find them fun; most know they’re evil.

So in ORPHAN, when an upscale couple with two children adopt a 9-year-old orphan with scary theme music, familial bliss is not in the flow chart.

Vera Farmiga stars as mother Kate, whose checkered history of alcoholism and a miscarriage – big baggage right there! – is exploited by cherubic orphan child, Esther (Isabelle Fuhrman) when she is adopted by the family.

12-year-old Isabelle Fuhrman, mature beyond her years, gives a studied, sinister, Kevin-Spacey-like performance as Esther, making Kate look crazy in all the old formulaic ways: releases the handbrake when little Max is in the car alone, making it look like Kate is irresponsible, cutting Kate’s roses around the shrine of her miscarried child, causing Kate to attack her in front of witnesses and – most disturbingly – breaking her own arm in a vice and accusing Kate of doing it.

Then things get REALLY psycho. Killing nuns and burning down treehouses and breaking a rival kid’s legs… it still doesn’t wake Peter Sarsgaard, although he does find enough wankergy to plonk voluptuous Vera – only to get busted by Esther – twice.

After she gives Esther merely a few rudimentary lessons, piano tutor Kate walks in on Esther playing Tchaikovsky. “You told me you couldn’t play!” Esther replies: “No, I thought you would like to teach me. It must be frustrating for a person who likes music as much as you to have a son who is uninterested and a daughter who is deaf.” Unintentionally hilarious because it has been established the son is a Guitar Hero freak, which means – contrary to popular belief – you are uninterested in music.

Directed by Spanish Jaume Collet-Serra (whose dubious claim to fame is directing Paris Hilton in HOUSE OF WAX, 2005), the niggling problem with ORPHAN is that only during the neat climactic twist is Esther’s motivation revealed – throughout the movie, we watch her perform incredibly dastardly deeds (which includes murder) and wonder what drives her, as she is being treated like a princess. Then again, kids be evil an’ all dat…