Finding the Other Mark Wahlberg.

When two outlandishly virile street cops are downed by their own hubris, the race is on to see which desk jockeys can step up as the next department heroes. 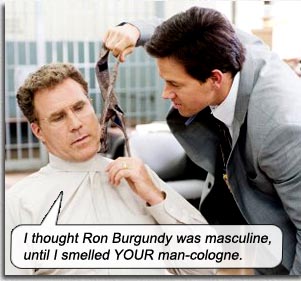 The supercops are Samuel L. Jackson and Dwayne Johnson, on minimum screentime and maximum testosterone; taking satirical aim at the exact macho roles they’ve played all their lives.

THE OTHER GUYS are Allen Gamble (Will Ferrell) and Terry Hoitz (Mark Wahlberg), two desk cops with very differing ambitions – taciturn Allen is content with computer bureaucracy while the confrontational Terry wants to beat the street with a passion, imploring his superiors, “I’m a peacock – you gotta let me fly!” then usually kicking a desk and running out like a sobbing girl.

The corporate corruption plot is secondary to the interplay and unlikely chemistry between Terry (Wahlberg) and Allen (Ferrell). We imagine Wahlberg would be the straight guy to Ferrell’s pratfaller, but he utterly commits himself to a role that is dry, petulant and unknowingly comical, based on a real world version of a damaged cop, but tweaked to absurdity.

Stuck behind a desk for accidentally shooting Derek Jeter in the leg (he attends counseling for a bunch of testosterone junkies called Officers Who Fire Their Guns in the Line of Duty), Terry wants that one big street collar to shoot him into the ranks of supercop, while his ad hoc partner Allen opts for the mundanity of issuing warrants for scaffolding violations. Terry despises Allen’s passivity: “If I was a lion I would attack you and eat you even if you weren’t in my food chain. If you were a tuna, I would swim out in the middle of the ocean and attack you!”

Eventually, Terry forces Allen at gunpoint to take a street call with him. On the way to the call (in Allen’s little red Prius), Terry ramps up to “do some damage” while Allen ramps up by sticking in a Little River Band CD, which incenses Terry, “I feel like I’m in Wal-Mart shopping for a training bra.”

Coincidentally, following the scaffolding violation leads them to a massive investment scheme fraud, led by conman David Ershon (Steve Coogan), who finds he can distract the two cops easily from arresting him by giving them tickets to stage musicals – at which they realize they’ve been duped usually halfway through the productions, which they admit are highly enjoyable nonetheless.

Michael Keaton is the frazzled police chief, with the secondary job at Bed Bath and Beyond to pay for his son’s transgender operation (watch the Special Features for an old-school Keaton ad-lib scene as the Bed Bath manager); Anne Heche looks very heterosexually female as a corporate bitch; Rob Riggle and Damon Wayans Jr. are vying for the supercop roles, while taking the piss out of Terry and Allen.

THE OTHER GUYS kicks into high gear when Terry meets Eva Mendes as Allen’s wife, which Allen has been describing as a battleaxe. She appears with ta-tas on high beam, apologizing for interrupting them, and while Allen won’t stop criticizing her for dressing like a hobo and barging in, Terry’s jaw drops as he asks her, “Who are you?”

“I’m Allen’s old lady.” Terry smirks to Allen, “No seriously, who is that?”

Wahlberg never overplays the infatuated gazes and unmitigated dismay at Allen having such a shapely spouse. And then to discover all Allen’s exes are as hot – Wahlberg’s boyish astonishment is a riot, considering he has ripped through more panty than Ferrell and the rest of the cast combined.

Terry’s ballerina ex-girl is also hot; she’s Jenna Haze lookalike Lindsay Sloane, so it’s ironic Terry accuses her of being a stripper. This time, it’s Allen’s turn to be surprised as Terry displays some fine ballet prowess, which Terry disclaims, “We learned to dance that way to show the other guys how queer they looked.”

“You learned to dance sarcastically?”

The Other Guys become the heroes they aspire to be by dismantling a Ponzi scheme in a manner no Ponzi scheme has probably ever been dismantled before – with slow motion bullets while diving like supercops, and in outlandish car chases.

So the outro credits are very interesting indeed: text screens and graphs outline all those outrageous American Bailout details that the media long ago decided they can’t do anything about because no one cares enough, so no one talks about (except Matt Taibbi); salary ratios of CEOs to average workers; how much could have been paid to every man, woman and child in America on the 700 billion dollar bailout; ratios of the super-rich to super-poor, leaving no middle class existent… The most sobering outro credits you will ever read.