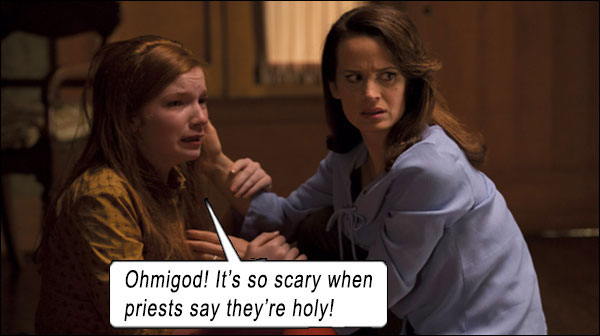 A charlatan spirit medium discovers her daughter can actually contact spirits through a Ouija board. And all, uh, hell breaks loose.

OUIJA: ORIGIN OF EVIL is a prequel to 2014’s OUIJA; set in the late ‘60s, we meet the young family that would become the ghosts of the 2014 film, and we experience their harrowing haunting that caused the ghost daughter Doris in the 2014 film to have her mouth sewn shut. It’s the usual fare of jumpscares, indistinct whispering, ominous visuals and unnecessary uplighting under faces; it’s even got the blankets-being-pulled-off-your-sleeping-body gag! This movie has everything for the discerning nine-year-old!

Regardless of its trope-laden content, ORIGIN is better written and scarier than its predecessor, with a filmic look like it was shot in the 1960s (Kodachrome-type sheen, period cars and attire, and even cue marks on the filmstock – those oval-shaped blips in the top right-hand corner, to let the projectionist know when to change reels! Like I said, this movie has everything!)

Alice Zander (Elizabeth Reaser), a widowed mother, makes ends meet for her two daughters (teen Lina (Annalise Basso) who just wants to party with her friends, and young Doris (Lulu Wilson) who misses her dead daddy) by enlisting them to aid her fake seances. Her clients’ gratitude in “contacting” their loved ones make Alice feel she is not scamming them, but giving them closure.

Alice introduces a Ouija board into her tool set, setting it up with magnets to enable her to manipulate the planchette with her knees. She soon discovers Doris communicating effortlessly with the actual spirit world, joyfully watching the planchette fly across the board by itself, spelling out messages. Alice revels in using Doris’s newfound power with clients (“We can actually do what we’ve been pretending to do!”) – they all think it’s dad helping from beyond… until Elliott from E.T. tells them it’s NOT dad…

Henry Thomas (forever Elliott to me!) is the local priest, who tricks the demon possessing Doris into revealing itself. Not long before HE is possessed as well, because God is powerless against ACTUAL evil. Just ask any exorcist. Parker Mack is Lina’s new boyfriend, if he can avoid getting killed by Doris first. At one point, Doris describes to him what it’s like to be strangled. (In this film, it’s quite creepy, although someone must have learned that from someone actually going through the steps of strangulation! That’s even creepier.)

The team that brought you those atmospheric thrillers GERALD’S GAME, OCULUS and BEFORE I WAKE (writer-director Mike Flanagan and longtime writing partner Jeff Howard) have crafted ORIGIN along the same lines, although in trying to make it connect to the inferior source material, it does track into illogical:

For example, the demon inside Doris possesses her to have “a voice” (we presume that’s also why the demon likes to gape her mouth wider than humanly possible, reminiscent of Edvard Munch’s The Scream, a visage made popular by Wes Craven’s homage film SCREAM). And that’s why Lina ends up stitching Doris’ mouth shut (in a scene reminiscent of a Hitchcock sequence, where we focus on the upraised hand with the needle in it over and over again), but why not try to exorcise the demon first, rather than stitching the poor girl’s mouth shut?!

And across the two movies, if you pay attention – character inconsistencies: y’see, everyone is redeemed in this movie’s climax (with mother Alice dying and seeing dad-ghost and Doris-ghost waiting for her in white clothes — oh, so this movie is a CATHOLIC grooming! Also, good thing CLOTHES have souls too, otherwise they’d be naked), yet in OUIJA, Doris is evil when they dig up her body. Lina is shown sewing up poor Doris’s mouth, yet when she calls on Doris in the final scene, Doris is prancing around upside-down on the ceiling like the demon has possessed her again… Explain yourself, Mr. Writer-Director.

The funniest thing about any possession movie is that in a storyline where the devil exists, God exists as well, as the counterpoint to evil, yet no man of God can ever stand up to the almighty evil of the low-rent demons possessing the antagonists. I mean, it’s never even major demons like Lucifer or Beelzebub; most of the time they are just nameless spirits, and the vessels that the Big Man Himself has called to represent him on Earth (i.e., priests) are always weak-principled impotent pawns that the evil spirit invariably has their way with. Now is that a commentary on God or the child-raping priests that represent him?

Ooooh, and that’s where we get the subtitle of the film: Priests – the Origin of Evil.