It’s HIGH NOON in space. Well, sort of. Well, not exactly. Well, not at all.

HIGH NOON (1952) is about the dark side of human frailty. OUTLAND is about some space outlaws too stupid not to shoot their cowboy guns in a pressure dome. 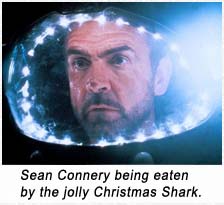 Director-writer Peter Hyams: he knows the “how” to make a film, he knows the “where” to get funding, he knows the “why” of driving a plot – but he still knows nothing about the mechanics of space. And I don’t know why he insists on setting his adventures time and again in a medium he is completely ignorant of.

When Hyams pitched OUTLAND as “HIGH NOON in space,” he was just lucky enough that the greenlight executives knew as little about space colonies and gravitational mechanics as he did.

Sean Connery is Marshall O’Niel in a small Earth colony stationed on Io, the volcanic moon of Jupiter. He is one honest man pitted against the corrupt Io administration (led by Peter Boyle) that is selling fatal illegal drugs to the colonists. When he attempts to shut down the cartel, the administration sends for professional killers from Earth to cancel O’Niel’s contract. O’Neil can only find one honest citizen (Frances Sternhagen) to stand with him against the killers.

And all ignorant physics breaks loose.

Like Hyams’ own CAPRICORN ONE (1978), this movie is flawed at such a bedrock level that we would have to re-educate him from kindergarten level upwards for any of this to make sense, so we throw up our hands and file it in the “pure fantasy crap” section. To begin with, it’s quaint how Hyams is trying to get all “scientific” by locating the action on Io – a tectonically unstable moonlet in volcanic flux being battered like taffy by Jupiter’s gravitational forces – where it is impossible to sink foundations to even start building a habitable Earth colony. (It would look like that planet of lava where Obiwan and Anakin battle in REVENGE OF THE SITH, 2005.) And then to have everyone walking around like they’re not in one-quarter Earth gravity. (It’s not like Hyams doesn’t know this – a title card gives us this factoid – then completely ignores its ramifications.)

Once a week a shuttle arrives from Earth. Sounds plausible – if you’re living in Detroit. If you’re on Io – and the one-way trip from Earth takes about two years – that means the shuttle transit company or the mining corporation that runs Io is flush enough to afford 104 shuttles, plus 104 crews plus 104 tanks of fuel and two years worth of food onboard 104 shuttles… is everyone just raking in the space-Euros in the future or doesn’t money exist anymore?

I could go on. And on and on. Like CAPRICORN ONE, not one aspect of this movie is thought through. It’s like watching one of those little outlandish plays you put on for your parents when you were seven. From the ridiculous 80s disco decor to the fact that bad guys would behave like 18th century cowboys and fire weapons indiscriminately within the confines of a biosphere. Even in the childish actioner TOTAL RECALL (1990), a bad guy thought twice before firing towards the Perspex dome that enclosed the city.

The story of the One Honest Man deserted by his supposed compatriots still holds some weight – and Connery is the right man to hold up such derision on his broad, righteous shoulders – but the story is buried under the weight of ignorance that informs every single scene.

Marshall O’Niel’s wife – like Marshall Kane’s (Gary Cooper) in HIGH NOON – deserts him. The surrogate “partner” who stands by O’Neil is an interesting social phenomenon:

In the 1950’s, when voluptuous Katie Jurado was cast as Kane’s ex-lover, movies were being made where couples slept in two single beds; so though Kane’s actual wife deserted him, it was not even considered that Gary Cooper would fool around with Jurado, because he was the Pure Hero and the institution of marriage was ironclad, unbreakable – so Jurado’s hotness was an unrepressed tension, a “tragedy” because it could not be acted upon.

Here in OUTLAND, Sean Connery’s 1980’s surrogate is an old woman (Sternhagen), because society’s new norm denotes that if a movie female is hot, it is presumed that a virile man like Connery would definitely have a romantic entanglement with her – so they defused the issue of Married Hero Being Dishonorable by making the surrogate old (although Sternhagen must have been a homewrecker in her day because she still retains a vestigial sexuality and amorous intent towards Connery). If HIGH NOON or – God help us! – OUTLAND is re-made after 2011 (sorry, “reimagined”), the surrogate role would go to a Megan Fox or some smooth-breasted, flat-bellied blond who owns no clothes that cover her midriff – because nowadays, the goalposts for honor and repression in movies have been moved once again, and it would be unthinkable that Hero should get no trim after beating up bad guys. Wife or not, Hero gotta get laid!

This movie could have been set anywhere – Hyams shoots himself in the foot by setting it in outer space; there are no idiosyncrasies that set it apart from being anywhere on Earth. Poor Connery can’t win, though. If he had remained James Bond, he might have ended up doing a space movie even worse than OUTLAND – MOONRAKER.