It is a pity that the quality of the storyline of these modern 3D animation features does not always match the level of talent that goes into their animation. 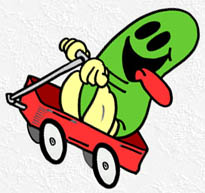 Over the vegetable patch

OVER THE HEDGE uses the most modern computer technology to animate the most ancient of storylines: lone racketeer cons group of patsies into doing his dirty work, then repents when he finds, over the course of his con, that the patsies provided him with the “family” that was missing from his life. Seems appropriate this tale is set in provincial suburbia, as its attitudes reek suburban provincialism.Not to say it isn’t enjoyable. But does our enjoyment stem from the tale and its telling, or from the megastar backbone that props up all these modern 3D animation films? I cannot recall a 3D animation film or cartoon from recent history (all the way back to TOY STORY in 1995), that does not utilize A-Listers: Tom Hanks (TOY STORY, POLAR EXPRESS), Mel Gibson (POCAHONTAS, CHICKEN RUN), Val Kilmer (PRINCE OF EGYPT), Ellen DeGeneres (FINDING NEMO), Kevin Spacey (A BUG’S LIFE), Samuel L. Jackson (THE INCREDIBLES), Ben Stiller (MADAGASCAR) – the list is endless.

Of course – as they say in THE GODFATHER – it’s just business. An unknown voice talent – no matter how much more talented than these recognizable marquee toppers – will simply not sell as many tickets as a star who needs no special talent but to simply lay down his voice to evoke all the characterization his past roles have wrought. These 3Ds have now reached such an impasse with “perception” of largeness that they cannot back down to under-the-counter names. Projections for advertising, computer-rendering time, star salaries and box office unequivocally force the hands of movie-makers into a vicious capitalistic circle that feeds off itself; bigger stars means bigger budget means wider release means more income means larger future projections means even bigger stars means even bigger funding means even bigger advertising means even bigger – homogeneity.

As with any commercial venture that sweeps across demographics and cultures, pap will replace zap in an attempt to flense all prospective offensiveness from the product; all originality must necessarily be replaced with something familiar, something tried-and-true – something bankable.

Hence, DreamWorks Animation gives us OVER THE HEDGE.

Familiarity? Here is a set of cartoon characters so typecast by the real-life actors who voice them that characterization can be completely dispensed with. There is RJ, the racketeer raccoon, voiced by Bruce Willis. Like all Willis’s action heroes, he is tough, resourceful and smart-mouthed. So too, Garry Shandling‘s tortoise, Verne, is exactly as neurotic as Garry Shandling. All one has to do is read the star names and their voiced animal is immediately slotted into a familiar “type” in the moviegoer’s character catalog. Example: William Shatner – if you filed him under “overactor,” you’d be right; he plays a possum with a penchant for melodramatic death scenes. Mention Nick Nolte and you envision a grizzled, bearish character – again, you’d be right: Nolte voices Vincent, a bear whom RJ owes a season’s supply of food. Wanda Sykes, spunky black woman, plays Stella, a black skunk with spunk. Even pop singer Avril Lavigne makes her feature film debut as a teenage possum, who seems to be wearing just that same amount of extra unnecessary mascara that gives Lavigne that barely-legal prostitute look which has enabled her to sell way too many albums. 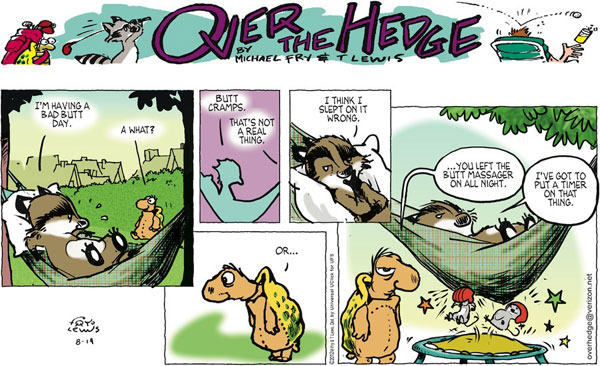 From T. Lewis‘s and Michael Fry‘s intelligent and extremely cute cartoon strip, OVER THE HEDGE tells the story of a clutch of woodland animals who come upon the titular hedge (an artificial barrier erected to separate forest wildlife from a planned suburban community) and who are encouraged to explore its other side by John McClane – I mean, RJ the Raccoon – to gather food for next winter in hedonistic amounts. What Korben Dallas – I mean, RJ – doesn’t tell these trusting critters is that he intends to steal all their gatherings to pay back Nolte’s bear.

As anyone who has studied a screenwriting course will tell you, RJ feels remorse over his duplicity at exactly the moment that his friends need him most – when they are captured and slated to die at the hands of the Exterminator (I believe the ex-Terminator is the Governor of California now).

When Vincent the Bear threatens RJ, he doesn’t use euphemisms; instead of “You’ll wish you were never born,” or “I will bring you down to Chinatown” – he very simply says, “If my food is not replaced by next week, I’m going to find you and kill you!” Surprisingly direct for a PG-13 comedy – one of those lines you would expect to be leached.

Screenstoried by Len Blum, Lorne Cameron, David Hoselton, and Karey Kirkpatrick, and directed by Kirkpatrick and Tim Johnson, the bulk of the movie is concerned with how these animals go about stealing their food from the humans who, as RJ puts it, “live to eat,” rather than eat to live. This justification is inserted, of course, to palliate the crime of stealing, by implying the humans have such a surplus that it is okay to skim the overflow. Whereas the comic strip had the luxury over many years to explore the more amusing foibles of human nature, the film can only concentrate on this one theme, often resorting to nakedness jokes (concerning Verne’s oft-removed shell) and fart jokes (pertaining to the skunk). Paying homage to Warner Brothers’ Pepé Le Pew, one gag involves disguising the skunk to distract a cat.

There are many gems to be found in the animation – more than one viewing is required to appreciate all the subsidiary action, facial expressions and lightning-quick one-liners sprinkled liberally (especially from Steve Carell‘s Attention Deficit squirrel); icing on a cake which the animators put much love into baking. Their work is not wasted; each secondary character, each texturized surface, each shadowed furball is much appreciated.

Now if only the studio could have loosened its white-knuckled hold on story cliché, the filmmakers might have achieved what the Unbreakable RJ does for his innocent charges – taken OVER THE HEDGE over the edge.