Play with fire, you burn your fingers and / Lose a hold of the flame, oh
It’s over, it’s done / The end is begun
If you listen to fools… The Mob Rules!
— Black Sabbath, “Mob Rules.” 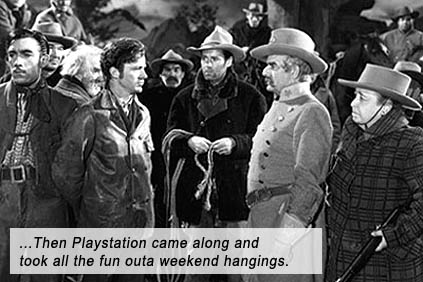 Two men ride into a tiny, sleepy western town in Nevada 1885, Red River Valley playing sadly on the harmonica soundtrack, Carter (Fonda) and Croft (Harry Morgan). The town’s idyll is broken by a messenger breathlessly reporting a well-loved cattle rancher, Kincaid, has been murdered and his cattle stolen.

A frantically-assembled posse of blood-crazed rednecks (which Carter and Croft join for the drifter heck of it) encounters three men at the Ox-Bow River in the middle of the night, with cattle bearing Kincaid’s brand. The leader, Donald (Dana Andrews) says they purchased the cattle and knew nothing of Kincaid’s death. A fair hearing is the last thing on the posse’s mind, but as the night wears on, two factions splinter the posse – those who want a trial, and those who want a hanging.

THE OX-BOW INCIDENT is a tension-filled, dialogue-driven, maddeningly astute look at how justice works in America – at the end of a redneck noose. In 2009, the cowboy duds are Armani, the law books are thicker, the killing methods are “sophisticated” – but nothing’s really changed. America is still an ornery kill-first questions-later redneck state. In their uncivilized youth, Europe and Russia and Asia dealt with their skeletons of torture and conquest and barbarism, but Amerika, a mere quarter-millennium old, retains such a juvenile disposition, it is still dealing with the fact that it CAN conquer and has not stopped to ask whether it SHOULD.

Underneath the grand strokes, the ravenous characters of OX-BOW, each with a different self-esteem or emasculation reason for joining the posse; each trying to prove himself a man in some way. There’s Tetley (Frank Conroy), outfitted in a Southern uniform which we know he didn’t see any battle in; Tetley’s pacifist son (William Eythe), forced into the manhunt by Tetley, to gird the boy’s loins; new deputy “Butch” Mapes (Dick Rich), a brutish dope out to prove himself worthy of the star; Farnley (Marc Lawrence) just being a man’s man; there are those who tag along to avert disaster, such as Davies (Harry Davenport) and Sparks (Leigh Whipper, considered a preacher because, I guess, he’s ambiguously black and knows a few Negro Spirituals). Some join the posse because they’ve just got nothing better to do.

Anthony Quinn is a baby-faced Mexican, one of the accused; the Wicked Witch of the West is the maid (Margaret Hamilton); and the gratuitous skirt is Mary Beth Hughes (from the classic MST 3K episode, I ACCUSE MY PARENTS), Carter’s old flame from town, now married to a loquacious dandy. Once again proving that women don’t get married to the men they desire or love – but to a man of means who asks them to. When she confronts Carter, she’s got a look like she’d crush his face between her thighs faster than her loquacious husband can think up another adjective.

Despite the 12 ANGRY MEN reference, Fonda is not the driving force behind the seeking of justice here; he is on the periphery, more like a group conscience. Yet even he can’t staunch the posse’s inexorable bloodlust, and to drive home its point, the movie must end tragically.

“It’s hard to see what is left of American freedom if the government has the authority to make anyone on its soil – citizen or non-citizen – disappear and then rule that no one can do anything about it.”
–Los Angeles Times, editorial, June 2004.

No trials, no representation, no evidence. Sound familiar? Guantanamo. This movie is somehow presciently an exact representation – EXACT – of how the George W. Bush administration prosecuted its failed state “justice” in its bogus War on Terror.

A cowboy actually says: “Down in Texas where I come from, we just go out and get a man and string him up!” Hmm, who else hails from Texas? George W. Bush! OX-BOW is directly of his generation. He would have watched it, and others like it, as a kid (as did his bloodlusting posse: John Yoo, David Addington, Donald Rumsfeld, David Petraeus, Jay Bybee, Alberto Gonzales, and of course, that hellspawn from Satan’s own vagina, Dick Cheney) – and taken away the wrong message! How do we know this? One word: Guantanamo.

Donald the accused pleads: “Why don’t you take us in to trial?” And decades later, a Bush appointee (Cheney regarding criminal trials for accused Gitmo detainees) replies in the exact words of one of the posse: “Because the law is slow and careless up here sometimes. We’re here to see that it’s speeded up.”

The thing that Cheney and his felon ilk will never understand is that we do not begrudge their capturing of suspected terrorists – it’s their JOB to capture people out to harm us – but that we despise their disposition of said terrorists. No one is saying that everyone the Amerikan Illegal Military captures is innocent. If you’re trolling a terorrist area, and cast your nets and throw the dice, you’re bound to capture terrorists; by the same token, if you’re trolling a terrorist area and cast your nets and throw the dice, you’re bound to capture INNOCENTS as well – which the rendition squads have done. It is well-documented FACT: Hamdi and Padilla and el-Masri and hundreds of others who have been tortured, killed, or supposedly committed suicide while at so-called black sites. And there is no way for those innocents to receive a fair trial to prove themselves so. Amerikan Illegal Military were given free reign by the criminal Bush-Cheney Administration to kill innocents alongside criminals without any distinction. If there are no trials, no representation and no evidence required, why bother making a distinction?

Jane Mayer’s jaw-dropping revelatory book, The Dark Side: The Inside Story of How the War on Terror turned into a War on American Ideals (Doubleday 2008), ends with one of the most ominous, truly soulless anecdotes in history: “On September 15, 2006, President Bush expressed puzzlement over what the Supreme Court meant when it ruled that the United States government must abide by the Geneva Conventions, laws that America itself had drafted and led the world in adopting sixty years before. Mocking the language of the Conventions, he asked, “What does that mean? ‘Outrages upon human dignity’?””

There’s a difference between the lynch mob at Ox-Bow and all the president’s men of the Dubya reign of terror – the Ox-Bow lynchers felt regret that would eat out their hearts all their living days, whereas the Ku Bush felons still feel nothing, especially apparent in their leader – too mongoloid to feel emotion. He has proven himself over eight incompetent years as an incognizant fool. And if you listen to fools, the Mob rules.