Get Rich or Die Lifting.

Colors straining against the filmstock like a 2-sizes-too-small t-shirt straining against pectorals, muscles thrumming like rippling duck butter, and planning as meticulous as a grade-schooler trying to get to second base, the whey-protein dramedy PAIN AND GAIN is a flamboyant recounting of a true crime story involving three Florida bodybuilders who kidnap a wealthy restaurant owner and supplant themselves in his affluent lifestyle. If only they had as much brain as muscle.

Mark Wahlberg is dissatisfied gym rat Daniel Lugo, who is inspired by a motivational speaker (Ken Jeong) to seize his destiny. Oh, my destiny! I thought you said seize the first rich person who hires me as their personal trainer. That would be businessman Victor Kershaw (Tony Shalhoub). Lugo cajoles two other like-minded gym rats into his scheme to torture Kershaw into giving up his security passwords – Paul Doyle (Dwayne “The Rock” Johnson), and Adrian Doorbal (Anthony Mackie).

Ed Harris plays reluctant, retired detective Ed Du Bois, on the trail of this remarkable case. He narrates the opening: “The event you are about to see took place in Miami, Florida between October 1994 and June ‘95. Unfortunately, this is a true story.” Well, no it isn’t. The actual tale of the Sun Gym gang is completely different from this wild-eyed telling, so in one respect it’s a little uncouth to laugh at the victims of these criminals. We can titter at the cluelessness of the criminals that led to their capture, but the filmmakers (writers Christopher Markus and Stephen McFeely, and director Michael Bay) paint the victims as unsavory characters themselves that are probably deserving of their ill fates… 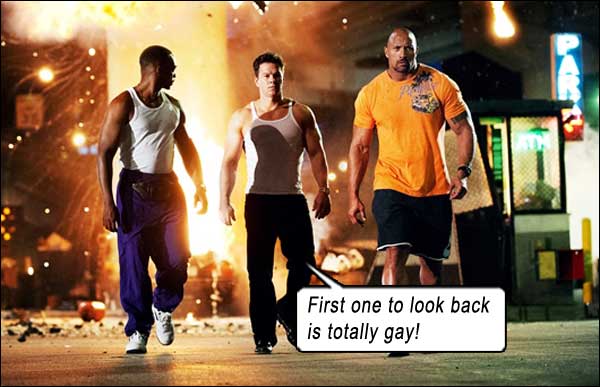 The three gym dumbbells have not thought through the Kershaw scheme past the kidnapping. Doyle is also a born-again dumbbell—I mean, Christian, who has just done time, so is affected by the religiosity of Kershaw, who calls Doyle “eldad,” with Doyle calling Kershaw “pepe” (terms of endearment). Lugo explodes at one point, “Stop calling him pepe like you were in the 6th grade together!”

Yes, the performances are hilarious, and I hope it doesn’t affect my card-carrying membership in the Pansexuality Guild, but after watching PAIN AND GAIN, I have a total man-crush on The Rock! He is obviously a great action star and seemingly a very nice guy in interviews, and of course, a body built by demi-gods – but after this role, which showcases not only more of his muscle mass than ever before (oh, dem boulder muscles!), but also his superb comedic chops, I think someone better check outside his house right now to make sure I’m not stalking him. Just as Mark Wahlberg trounced Will Ferrell as a comedian in THE OTHER GUYS, here Dwayne Johnson does the same to Mark Wahlberg! (And let us not forget Johnson’s blazing comedic few minutes in THE OTHER GUYS as well, satirizing his own man-mountain character.)

Doorbal (Mackie) has his own problems, taking steroids that are making him soft downunda, which is coincidental, as the woman who revives that iron bar is a nurse from Australia (Rebel Wilson). Doyle’s stripper girlfriend is Sorina (Bar Paly), the type of woman that makes man-kind give thanks to god-kind: busty, blond, braindead, and a body built for banging.

Lugo decides that Kershaw needs to be killed, which none of them want to do. At first. Then their attempted murder becomes more cause for comedy hijinks, as the gang tries to set Kershaw on fire and burn him in his car. Kershaw miraculously escapes. Then they run over him in their van, all of them arguing over who is responsible for his death, aligning it with who was touching the steering wheel at the time. Kershaw lives through this as well, and makes it to a hospital. This doesn’t stop the gang brazenly planning to walk in and simply smother Kershaw where he lies, until their plans meet with other obstacles – themselves.

Not content with Kershaw’s riches, Doyle tries to rob an armored car, with paint-splattering results, and Doyle and Lugo try to scam a phone-sex business owner, and end up killing him accidentally. Lugo actually makes it to living in Kershaw’s beachfront home and befriending the neighbors, as if he is the new tenant, before it all comes crashing down.

For once, Michael Bay’s swashbuckling direction doesn’t get in the way, and actually works for this outrageous hyper-reality. All deltoid quips and loud colors and hero angles – for the bad guys. While the victims look putzy. We are forced to root for the slimeballs, and there is no good reason why. Is it because they’re lifters? How much do you bench, bro? When they stride three abreast in superhero slow motion, Wahlberg and Johnson are Iron Man and Iron Monger alongside the more streamlined Mackie, who is ironically the chubby-chaser. Wahlberg chants, “I’m hot! I’m big! I’m hot! I’m big!…” As Michael Bay tumescently rolls camera.

You would think the scenes of the gang dismembering the bodies of the phone-sex guy and his wife would give Bay pause on the flamboyance. Nope. It only gets sexier.

Michael Bay makes a funny, entertaining movie about a sordid series of incidents that shouldn’t be trivialized in a comedy. But I get it: Bay shows other people’s pain – to make monetary gain.