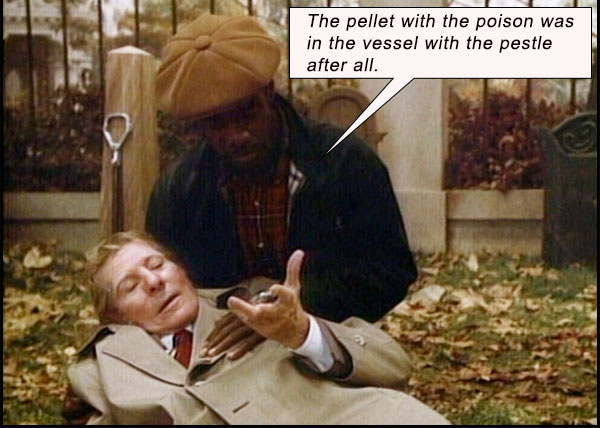 Finding time to be greater than itself.

A young man rescues a “very old man” from muggers in a cemetery, and is befriended by the old man, whom he discovers is a paladin, a guardian of a timepiece that has stopped ticking, holding in limbo the last hour of the universe.

Written by the great Harlan Ellison, and screenplayed by the author himself for this TWILIGHT ZONE episode (Season 1, Episode 7), PALADIN OF THE LOST HOUR features legendary Danny Kaye as the old man Gaspar (in his second last film role before his death in 1987, at 76). Glynn Turman is Billy, the young man who rescues Gaspar. A Viet Nam vet down on his luck, Billy yet offers Gaspar couch space in his tiny apartment for the remaining days of his life, which Gaspar assures Billy will not be many.

Over the course of their short friendship, we find Gaspar is actually grooming Billy to become the next paladin of the lost hour – that hour that swirled into the Cosmos unbound when Pope Gregory XIII standardized the calendar in 1582, bringing it into sync with equinoxes and solstices, forcing the civilized world to skip ahead 11 days (from October 4th to October 15th) and miscalculating that the actual skip should have been 11 days – and one hour.

That hour being entwined with the fate of the universe is pure Ellison, broaching concepts too big for our finite braincases to encapsulate. I just find it amazing that he constructed this unique temporal tale from that single, all-encompassing real-life act. It’s a slight pity that the “TV soundtrack” and “TV production values” keep this piece from attaining its full existential potential.

From Wikipedia, we read reports of Harlan being dissatisfied with Kaye’s performance, claiming that Kaye “would act very well during close ups, but act poorly during master shots. This made it hard to edit an episode where Gaspar and Billy appear as equals, as intended.” But there is nothing wanting in Kaye’s performance – it’s fine for a man of his advanced age. (It reminds me of Jerry Lewis turning to poignant drama as well in his autumn years.) I find it hard to believe that this loquacious, quick-witted entertainer (who made his bones in the ‘40s and ‘50s (!) with classics like THE SECRET LIFE OF WALTER MITTY and THE COURT JESTER) would even have a lower phone-in gear.

And director Gilbert Cates, embarrassed with the “botched editing,” removed his name from the credits, and inserted that infamous pseudonym for directors who disown their product – Alan Smithee.

Yet no one mentions the horrendous overacting of Glynn Turner, as he flashes back to a blood-curdling incident in Viet Nam. It’s quite the TV sizzle reel.

In its 32 minutes, PALADIN OF THE LOST HOUR contains almost all the dialogue from the short story (featured in the collection Angry Candy, 1988), and redeems both characters poignantly, one ending his life of guardianship, and one starting his life as an overactor.