Pamela Anderson and Tommy Lee naked. Like we haven’t seen that before. 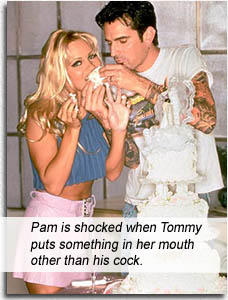 Let’s understand something: PAM AND TOMMY LEE: HARDCORE & UNCENSORED is not a movie in the regular sense of the word. It is a home video “leaked” to the press that has attained international notoriety because it features two well-known celebrities getting married. Oh, and having crappy sex. For being marketed as a DVD by the shameless couple, it warrants its shelf space here in cucumberland.

FYI: On Tommy Lee’s imdb page, for this “movie” he is listed as director, producer, cinematographer, editor and special effects. When do we start either laughing or banging our heads against a wall?

If you’re looking for a good sex film, look anywhere but here. Watching Pam and Tommy engage in sexual congress in this grainy, noisy, wobbly, hand-held presentation is purely academic. However, if you are looking for a glimpse into what you may become should your dreams of fame and fortune actually be realized, this “film” might be educational in a preventative sense. Preventative not because of the wealth that is nonchalantly on display, but if you have to become this trailer-trashed to become this wealthy, you might consider remaining a poverty-stricken starving muso with all your brain cells and dignity intact.

Yet these two are well aware of their humble roots, and it actually comes across in the video! They seem continually amazed that they can be this drunk and this naked with someone this famous on this boat in this lifetime. Their ignorance might be misconstrued as arrogance, but take away the jail tatts and fake tits and these two are as amazed about their present situation as the rest of us are.

And that’s the wondrous aspect of this home video. Is anyone looking past Pam’s silicone and Tommy’s horse to what they’re actually doing? They’re on a luxury yacht in the middle of a beautiful deserted bay, cliffs caressing the water’s edge, vault of open sky beaming down a cozy tropical sun… These people were not born into their wealth; they are not royalty or from family dynasties; they earned their riches from scratch through the vagaries of the entertainment industry. They never planned to be here, yet they are young and vital enough to drink in the unadulterated enjoyment of arriving. They were people like you and me just a few short years ago, who found themselves in career pathways that rocketed them into the nuveau riche stratosphere.

If you had the chance, wouldn’t YOU be doing this with your money also? ‘Taint fair, is it?

One of them got here via a drum-job exposing his ass, one via hum-jobs exposing her tits. Amazing.

One: that anyone can succeed, which gives hope to all.

Two: the devil flip side of that coin is that sometimes the undeserving do. The “anyone can be president” syndrome means someone like W can and will; means goobers like Pam and Tommy, with vocabularies that focus around four words, “I love you, baby!” can market this idiocy and actually profit from it.

Don’t misapprehend me: I’m not in any way condemning the sex on film or the muntoid demeanor of its stars, or even the bad, boring quality of the video itself. It is the fact that it became such a hot item, actually sellable, when it is so obviously just a badly filmed home video.

Seems that if you “release” a sex tape, it only enhances your notoriety, instead of damaging you irreconcilably, which is what should happen in a society too gutless to show naked breasts on network TV. Where is the consistency, people? If a sex tape becomes famous, it must prove something about the society that claims itself above such prurience: society is lying.

Pam and Tommy’s home video (erroneously called a sex tape) is arguably the first of its genre. Yes, we’ve all made “sex tapes” (as I’m sure everyone has since the invention of the moving picture camera), but none would stir the pants of society like Pam and Tommy’s, closely followed by Pam and Bret’s, then Pam and Kid Rock’s (am I sensing a trend here?); then Paris Hilton, Mini-Me, Fred Durst (ugh! horrifying!), Amy Fisher, Gene Simmons; even hypocrite Puritan imbecile Carrie Prejean has a sex tape (lone fingerbang edition) – and each of them (along with scores of others) has only enhanced their public profile. If Billy Clinton had actually FILMED himself plonking that fat pig under the Oval Egg desk, he wouldn’t have been charged with perjury or obstruction of justice – the evidence would have been obvious and everyone would have laughed and winked sideways at him and let him pass his Health Reform bills.