PANDORUM is One Great Idea subsumed by all the bloodied action and trapped-in-space mayhem and frenzied filmstock required to hold a modern audience’s attention. 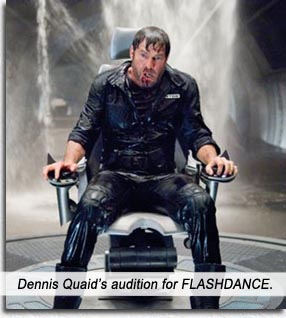 But it frenzies up well, which accounts for its style-over-substance cucumber rating. Top-notch set design, direction, editing, all creating a claustrophobic impression of a star cruiser too long in space. Though PANDORUM is rife with clichés, they are folded neatly into the mystery, suspense and action.

The “Pandorum” of the title is an hallucinatory space sickness that overcomes long term spacefarers; its manifestation in the crew of this interstellar spaceship is instrumental to the thriller plot of PANDORUM. But the reason behind this deep space vehicle is the One Great Idea that is hardly addressed: The spacecraft Elysium is an ark, a biosphere transporting the DNA of millions of species to a new, Earth-like world; a journey so long that generations of humans will birth and die on this spacecraft before they reach their destination, full crews put into hypersleep for eight years at a stretch; all personnel tattooed on their forearms with their respective tasks and assigned areas of the ship; a journey so torturous that in those years between the stars… Pandorum.

Ben Foster is Bower, who awakens onboard the Elysium as one of the disoriented crew. Dennis Quaid is Payton, his superior officer, also recently-awakened. The ship seems deserted, malfunctioning and probably off course. (Their little holographic computer displays are just another cool notch in the tech designers’ gunbelts.)

Trying to find answers, Payton stays in the control room while Bower goes crawling through the ship’s innards and ominous corridors. Director Christian Alvart shoots PANDORUM through steel-green colors and shivering cold black, conjuring the suspenseful aspects of ALIEN, THE DESCENT, fear of the dark, and squeezing your desperate body through crawlspaces one size smaller than your t-shirt.

It’s almost a haunted house tale onboard a spacecraft (like ALIEN or EVENT HORIZON) but then it unfortunately degenerates to cannibals skulking in the bowels rather than something less prosaic. But the cannibals are at least organic to the DNA premise, the raison d’être of Elysium. So this little green cucumber gives PANDORUM a little green pass. In a colony dedicated to long term goals for humankind, this group have been isolated so long they’ve reverted to their base, selfish state, elevating ferociousness as righteousness, seeking only short term guttural satisfaction, establishing themselves as a small-minded elite cannibal class doomed to anarchic dissolution. I’m almost certain they’re Republicans.

Bower meets other humans on the edge of survival: Vietnamese Cung Le brings a feral presence as spear-wielding Manh, one of the ship’s crew who has regressed to a kind of tribal warrior state; German-born Antje Traue brings her Amazon cleavage covered in sensual gloop. Dirty dirty dirty girl. She is a leather-clad Mad Max-ish warrior herself, custodian of the million DNA vials, making blatant reference to “Noah’s Ark,” and deserves my naked palm taken to her taut, stinging backside. Yes she does.

These two warriors team with Bower against the Republican humanoids in many a close-cut corridor battle.

As Antje flaunts her leather for the men, Cam Gigandet squirms his way through the wainscoting tubes for the ladies – naked! Mysterious blond Gigandet (also covered in sensual gloop) emerges into the control room to plant untold doubt in Payton’s mind on what’s what and who’s who in the spaceship, as it shudders toward an inexorable breakdown. It’s all about the Pandorum.

Like all human endeavors with a targeted timespan that exceeds one human lifetime, once the instigating generation dies out, everything gets pear-shaped. When we examine human history, we realize that every single advancement, every technological breakthrough, every beneficial scheme, benefitted the generation that instigated it first, and if those advancements benefitted future generations at all, that was merely a by-product of immediate benefit. Ancient structures such as the pyramids may be an exception, but in those endeavors, there was at least the throughline of royal blood overseeing the multiple-generation endeavor.

PANDORUM reminds us that when the time comes to send humans to another star system in a biosphere, be sure to pack the long knives, the sensual leather and the sperm samples. Cos you’re bound to meet Republicans.