Are We Scare Yet?

They should remove the word “Activity” from this movie’s title. Note to filmmakers: after nothing happens on camera for two minutes, no need to keep the camera running for another two minutes, guys. 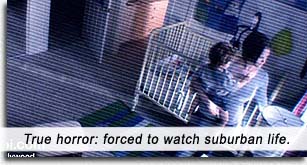 The problem with PARANORMAL ACTIVITY 2 is that it’s already been done – far better – by its own predecessor. It was innovative ONCE. Fool us twice, shame on us.

Oren Peli, writer-director of PARANORMAL ACTIVITY (2009), shares a writer and producer credit on this deformed clone, and we can only presume that minds far smaller than his (yet with far greater funding) made the onerous decisions on how to drive this movie to the sorry state of dung heap it is.

A family moves into a house, experience strange disturbances and decide to outfit their security system with cameras – so most of this movie is seen from the corners of rooms where you mount those little burglar alarm sensors. Now strange disturbances can happen and we can witness them and pretend like we care. Father (Brian Boland) reminds me of Brian Posehn for some reason – he’s got that same “I can’t act so I’m a stand-up comedian” vibe. Mother (Sprague Grayden) may be better actor, but just doesn’t care, leaving her baby alone so much, someone shoulda called Social Services a long time ago.

Of course, the dog and the female Mexican slave (Vivis Cortez) “sense” something paranormal in the house, which is less an observation on certain people being attuned to the spirit world, and more a commentary of how white people view the tree of evolution, placing Mexicans next to canines in the Order Mammalia.

Doors yawn open and swing closed (emphasis on yawn), the pool cleaner machine ends up out of the water every morning, the baby crawls around by itself. Real terrifying stuff. We get the formulaic loud noises, crying, dark rooms, Then we get the leg-dragging gag. Seen it.

When Brian Posehn sees the tape of his wife being dragged by a spirit, he calls in a paranormal expert – yes, the Mexican woman.

We do a double-take when Katie Featherston and her cleavage turn up as the sister-in-law. Didn’t she die in PARANORMAL ACTIVITY? If you don’t know that previous movie, revealing here that ACTIVITY 2 is its prequel is – like most of this movie – pointless. And only insiders will know who Micah is when he turns up looking all Eric Bana – husband to Katie and soon to be ghost food, as a title card announces, “60 Days Before Micah’s Death.” Can’t hardly wait. Don’t hardly care.

Okay, so let’s say you concede that your house is haunted, you concede there are malevolent spirits out to get your family… still let Baby sleep in his own room and rarely check in on him; let him wander the house and leave him with an irresponsible sitter and let him be levitated out of his crib… And in the film’s final minutes, we get the shaky Steadicam as someone in the family runs through the house desperately looking for Baby – filming all the while. True parental concern. See? I’m not the only one who doesn’t care.