I watched PARANORMAL ENTITY at night and I was not able to sleep afterwards. I was laughing that hard. 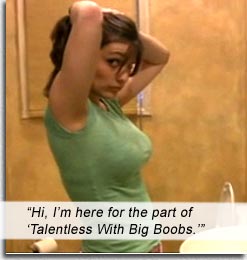 A guy walks around his badly set-dressed house with a Point of View camera for ten nights, recording evidence of the titular paranormal entity haunting him and his bland mother and big-breasted sister. Boring has a new middle name.

Knowingly ripping off, plagiarizing, stealing, copycatting – call it what you will – Oren Peli’s 2009 smash, PARANORMAL ACTIVITY, this movie is one of those “found footage” films (Uh, yeah, the footage was “found” so there doesn’t have to be any, you know, quality or nuthin’), supposedly cobbled together for public viewing after the principal characters are dead, so we can see “what really happened”; courting authenticity with the cunning use of title cards:

OPENER: “…Thomas Finley was arrested for the murder of his nineteen-year old sister, Samantha, as well as the murder of fifty-two year old, Edgar Laruen, a paranormal Investigator. In his police statement [my emphasis], Thomas claimed that the victims were attacked by a demonic entity of unknown origin. Days later, he committed suicide.”

And the CLOSING title card tells us Thomas was found dead holding the body of his sister. Guess the police beat the statement out of him.

Big WARNING label across the DVD cover: “Actual Crime Scene Footage. Contains violent and disturbing images.” There’s only one word of truth in that warning. The word “and.”

PARANORMAL ENTITY is produced by Global Asylum, the company that alters the names of blockbusters (you know, like porn movies: SHAVING RYAN’S PRIVATES, THE SPERMINATOR, et al) and makes crud straight-to-DVD ripoffs: THE DA VINCI TREASURE, SNAKES ON A TRAIN, AVH: ALIEN VS. HUNTER (starring William Katt – excuse me, the F-List is calling), hoping they fool some of the people all of the time into thinking there is even a shred of quality associated with their blatant plagiarism and zero production skills. It must be working. Global Asylum is still in business.But it’s a wonder they’re still in business: firstly, how do they stay out of copyright infringement courts long enough to produce more features, and secondly, exactly how numb-brained are the DVD-viewing populace to actually rent their trash? (I didn’t rent: I was held down by a paranormal entity and forced to watch it on cable.)

Writer-director-star Shane Van Dyke plays Thomas Finley, mostly holding the POV camera (which dutifully shows us hours of nothing happening – hey Shane, that’s why they call it “editing”), but occasionally doing some great Shakespearean acting in front of the lens which involves screaming like a girl and not lighting his own face when he does monologues into the camera.

The mother looks like she just started acting last week; the daughter, the week before that. Fia Perera is the mom whose blank face can teach a few professional poker players a thing or two; Erin Hogan is the daughter, whose massive chest out-acted everyone including the ghost. In keeping with copying every element from PARANORMAL ACTIVITY (sheets pulled off bed, doors opening, banging noises), Hogan matches the bazoongas of Katie Featherston in ACTIVITY tit for tat.

Just when we think the acting can get no worse, in steps Norman Saleet as Edgar, a “paranormal investigator” (a job which requires only the skill of – ironically – “acting” as if you really do sense supernatural presences).

Keep in mind we are not yet taking into account the absolute malarkey of the concepts in the actual story: the superstitions of poltergeists and evil spirits, “You can talk to the dead by writing to them,” “It followed us to a motel room,” “When someone loses a loved one and they’re trying to make contact with that loved one, they sometimes unknowingly invite in a dark entity, it’s like an open door, a free pass.”

My head’s about to explode.

And I haven’t even gotten to the footprints on the walls – Thomas follows ashen footprints on the walls, which lead down a narrow staircase to the basement. The staircase is two feet wide. The footprints are on the side walls. Think about it: either the spirit was making its feet solid to make the footprints while keeping its upper body incorporeal enough to float through the other side of the staircase wall – or it was crouching. What are the rules? It’s a spirit, so it can walk through walls – but how come it can’t come through the door when Thomas locks himself in his room, instead rattling the handle and banging on the door screaming like a chick whose been told those jeans make her look fat? Let’s ask a priest in between his busy schedule of raping school boys.

Nice segue, Poffy: the entity rapes Samantha in a funny, screaming, bloody, naked scene that lets the twins out at last.

Okay, you can go to bed now. If you can stop laughing.