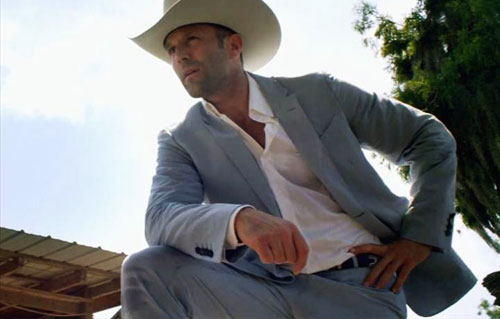 He’s Jason Statham. He beats people up. As usual. But in PARKER, what isn’t so usual is that Statham, in the title role, actually gets hurt while beating people up. Like “real life” hurt. Hurt bad. That’s the best element in this stock actioner where Mr. Statham (THE MECHANIC 2011) and director Taylor Hackford (RAY) take no discernible risks or stray too far from the path of Righteous Bitchslap.

Parker (Statham) is a thief, with a solid set of principles, “Don’t steal from people who can’t afford it,” etc. You don’t need to hear them; enough to know Parker is the Robin Hood trope, the “honorable thief,” the type that makes The Laydayz swoon even as he divests them of jewelry.

Movie opens with Parker pulling a heist at an Ohio fair with four other thieves – Michael Chiklis (Loose Cannon leader), Clifton Collins Jr. (The Brooder), Micah Hauptman (The Wimp) and Wendell Pierce (Token Black). These four cheat Parker out of his money and leave him for dead by the road. Now Parker’s out for revenge and his share of the money.

If the plot sounds familiar, it should. It’s the same plot as POINT BLANK (1967) with Lee Marvin, and PAYBACK (1999) with Mel Gibson. It’s the same character, from the 1962 novel by Donald E. Westlake, The Hunter. Ah Hollywood, you’ve done it again. No, literally, you bereft-of-ideas pricks have just remade the same movie for the second time. 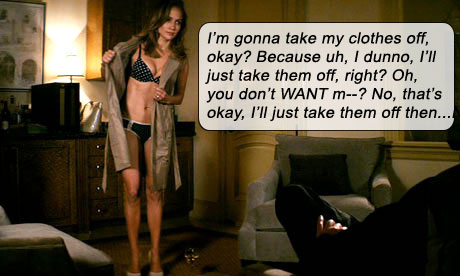 Jennifer Lopez is a glorified extra, whose agent scored her more lines than her character deserved, on the strength of her ass. Lopez is bored realtor Leslie, who falls for Parker, disguised as a Texan oilman (what gold digger wouldn’t fall for a Texas oilman?). In his quest to locate the gang, Parker fakes house-hunting, doing an American accent worse than Don Cheadle’s British accent in OCEAN’S ELEVEN and using the Clark Kent method of disguise (apparently a white ten gallon hat makes this Londoner that oozes cockney look like a Texan). One gratuitous underwear scene later, Lopez is helping Parker track his quarry, though she never does bed Parker or ride off with him, as we discover Parker has a devoted girlfriend (Emma Booth) willing to tend his wounds and then leave the storyline again. We imagine she must be a mistaken holdover from the original novel because there seems no reason Statham and Lopez can’t drive off into the sunset with the cash, capping a cliché film with its deserved cliché ending.

Nick Nolte, as Parker’s father-figure, looks like The Thing. No, not like Michael Chiklis – he looks like the actual The Thing from Marvel Comics; he’s orange and made of rocks. He offers Parker the same amount of cash to just turn tail and disappear, instead of going after the gang that wronged him – but Parker’s a man of principle, “Don’t hurt anyone who doesn’t deserve it…” Yeah, yeah, but what if you’re the one getting hurt?

PARKER is a well-produced actioner that treads no new territory – you will be with the anti-hero all the way as he steals cars effortlessly, sets his traps ingeniously and stalks his quarry with premeditated murder on his mind (last time I checked these were still  felonies; thank Christ he’s sexy, eh?) – yet it includes that nice touch of Parker’s physical injuries. Statham reportedly did all his own stunts, and though he hoves into every skirmish with his usual pugilist flair, the aftermath is devastating. He doesn’t come away with just one scratch above his left eyebrow (Hollywood shorthand for Just Been Wrestling), he suffers broken ribs, stitches, gaping wounds, blood loss; he limps, he moans, he is hospitalized; this isn’t clean hapkido with no body sweat, this is smashing glass over people’s heads and actually having to deal with the shards. No one walks away unscathed – it takes at least a hot shower in his hotel room to cure Parker of his injuries…

Another nice touch is that Leslie, after she discovers Parker’s blond flat-bellied girlfriend, doesn’t play the jilted lover and try to screw up his plans – she continues to help him through the whole caper. An actual platonic relationship between two sexy protagonists!