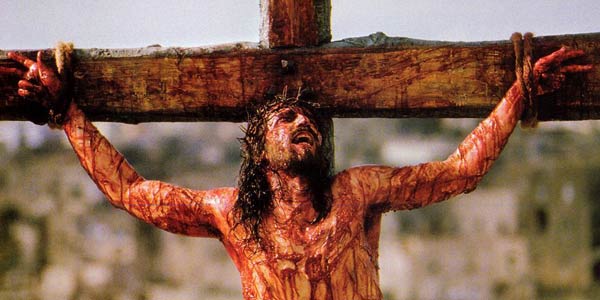 The Bashin’ of The Christ.

Yeah, this is what all those other Jesus movies have been missing – the TORTURE. If you’re gonna bash Jesus, you might as well bash him right.

Okay, send me your hate mail and get it over with. But Mel, not me, does more bashing of your effeminate savior than every other Jesus movie in the last two-thousand years combined.

That’s all that PASSION OF THE CHRIST is. The maiming, whipping, crucifying and killing of one Jesus H. Christ, Super Jew. The ultimate christian snuff film. People blame juvenile violence on video games, heavy metal music, any number of asinine inanities, yet here those same people are beating off to the beating, surging for the scourging, forcing this filth down their children’s necks – then wondering in blank “who-me?” innocence why their kids are so violent.

Mel Gibson, a great filmmaker, has taken this most famous of christian fairy tales and made HALF a movie. Because he knows the whole Earth is inculcated with the bloody tale, he provides not a whit of backstory, motivation or plot, expecting us all to bow in supplication before this B-movie made on an A-budget. Just one example of bad movie-making:

We see Disciple Peter (we don’t know it is him at the time), with a woman at his feet, draw a line in the sand and people drop stones to the dusty earth. Anyone unfamiliar with their fractured fairy tales is lost. (As all good christys know, this incident invokes the immortal, “Let him who hath understanding reckon the Number of the Beast” – sorry, that was Iron Maiden – this is, “He who is without sin alas poor Yorrick I knew him well.”)

The Passion of The Cuke

Gonna call it like I see it…Night. A long-haired guy who looks like Daniel Day-Lewis (Jim Caviezel) wakes up three Jewish guys, chiding them for not staying awake with him in the garden while he talks to his father. He keeps looking toward the Milky Way. Pretty sure he thinks his father is Captain Kirk.

Meanwhile, a woman named Magdalen (Monica Bellucci) dreams of good old days when she was a whore making a good living – until Jesus turned up and ruined her livelihood.

Somewhere else, a bunch of bearded guys all wearing the same type of funny hat – maybe meeting of NAMBLA – paying a guy named Judas (Luca Lionello). NAMBLA head guy throws a satchel at Judas – misses – coins everywhere. Oh, you catch like a girl! You throw like a girl! I threw in slow motion and you still couldn’t catch!

Daniel Day-Lewis (whom we realize is a hippie named Jesus or Jehovah or Jehoshaphat or something) is delirious as he tries to get beamed up, while totally ignoring a transgendered guy in a hoodie next to him. Creepy synthesizer music. Either an M1 on Universe patch – or a Prophet synthesizer (‘Prophet,’ get it?! – I kill me!).

Tranny sends a cute bright snake to be the hippie’s friend – hippie steps on it. PETA goes wild. So does Peter.

Judas kisses Jesus. The first tragic bromance. Soldier’s ear is cut off. Hippie picks it up, attaches it without any anesthetic, stitches or surgery. Obviously using devil’s black magic. One of his Lebanese Jew friends cuts and runs – didn’t invent Leave No Man Behind yet.

Under a bridge, a zombie runs by Judas. Not making this up.

Meanwhile, soldiers go door-to-door paying everyone off to buy vote for the hippie’s death. Exactly like democracy in America.

Soldier captain dying to speak with a British accent. To prove he’s Roman. Doesn’t matter anyway, cos we can’t understand a word anyone’s saying – Aramaic with English subtitles. Who has time to read when touching yourself in the dark over sexy sado-maso?

Flashback – we see how revolutionary the hippie is as he makes a tall table – in a culture that doesn’t use chairs.

From amount of unwarranted torture on the hippie – probably Guantanamo Bay. Guy in beard and funny hat probably George W. Incognito – getting his erections the only way he knows how.

Old guy says, “All I’ve heard from these witnesses is mindless contradiction!” What does he expect? They’re quoting the bible.

When hippie tells them he is son of god, Caiphas (Mattia Sbragia) rips his nice embroidered jacket and they all start playing one-potato two-potato on hippie’s head.

So Jesus gives Peter that look, you know look that says, I Told You So, Douchebag. Maybe he’s a soothsayer or Delphic Oracle, or something else that is not christian. How else can he know future? Being christian means free will – predestination and prophesy negate free will. Hence, Jesus Not Christian by foretelling Peter being douche. Or maybe Jesus just Jamaican Psychic. 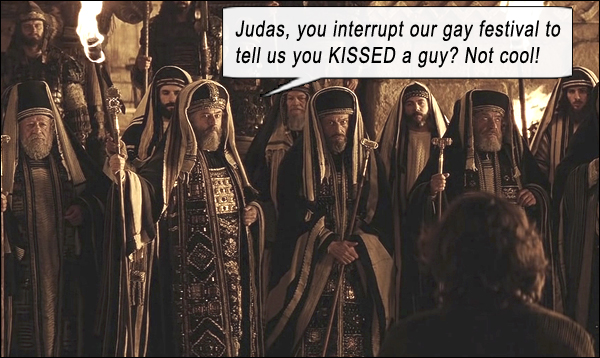 Judas goes back to guys with funny hats. Didn’t get any tongue, tries to get refund on his kiss. Now Jesus is Damaged Goods, won’t want to make out with Judas any more. Throws pieces of silver back at priests. They reply in anger, You still throw like a girl!

Then Judas is running across hill, followed by kids like THE SOUND OF MUSIC. LSD kicking in cos he freaks out. The tranny appears. How do you solve a problem like Iscariot?

Pilate’s wife tells him not to kill the Galilean because he’s “holy.” Oh, she’s had one of THOSE dreams about him.

Pilate (Hristo Shopov) asks George W. Herod, “Do you always punish your prisoners before they’re judged?” Only if I want erection. Viagra not invented yet.

“Why don’t you judge him according to your own laws?”
Laws? We’re Republicans. Constitution is only a piece of paper.

“My Kingdom is not of this world.”
Oh, so you’re one of them Jesus Freaks.

Pervert Herod (Luca De Dominicis) asks if he could spank him a little on the botty. Then sends hippie back to Pilate, who has to get drunk to speak in public again, like Biggus Dickus.

And you, christians, love to watch. Like a car accident with a head on the street. Yes you do, you blood-drinking swine… Oh yes, you do… 600 million worldwide gross says you do.

It’s not my fault I sin – it is the DEVIL’S fault! And you’re here to wipe it all away, right? You died on a log so I could continue sinning. You’re taking one for the team, you sin-slut. I am liberated! Free of sin, now that you took it up the ass for me, like my jail bitch’s suction-cup behind. Oops! DEVIL’S fault, not mine. I’M not thinking these thoughts; so evil, MUST be THE DEVIL! I’ve got free will – but DEVIL made me do it.

Into your hands I commend my sinning – Take that, Jesus! In a flail of orgiastic whip-crack… 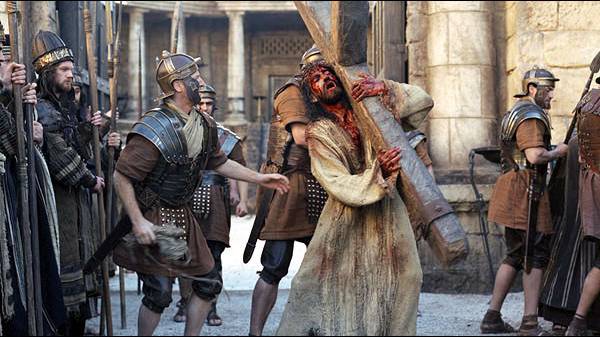 They leave him looking like he’s had a wild night with Catwoman, no condom. Michelle Pfeiffer, not Halle Berry.

His mother and whore girlfriend and one of his girlyman disciples – instead of trying any legal means of getting him acquitted, they stand and cry, which is tons more helpful. They shove through crowd, girlyman acting as battering ram: Here, come this way, Mother. You too, slut.

On crucifixion boulevard; stoning him, deriding him, spitting and calling him false leader. His approval rating still better than George W. Bush.

Soldiers whipping him, closest soldiers getting caught in the friendly fire whip. Other two criminals get just the crossbeam to carry. Soldiers give him full cross – not for any reason, because it’s in all the Stations of The Cross statues.

Guy as tall as Darth Vader gets sucked into carrying the cross for him. You better thank me for this, man! You better crucify the shit outa this thing!

Soldier going batshit lashing everyone in the pathway of the crucifixion party. The Gay Mardi Gras of its time, all the masochists piled right up in the front rows, taste the whip so nice.

John Tesh with his finger stuck on the low E on his Oberheim synth.

He grinds his face into the Shroud of Turin. Woman simply puts rag on his face, doesn’t wipe, to get full image of Jesus On A Napkin. She sells on e-Bay for 200 shekels.

For to only love those who love you – what reward is there in that? Of course! That’s why you do it – the REWARD. To score that throw pillow at the feet of the saviour in an imaginary celestial palace. If no reward, why bother loving those enemy bitches?

Only the mind of a true christian could come up with the horror of turning the cross over and letting it fall on its face – with him on it – to hammer the nails sticking through his hands and through the wood, to bend them so they won’t fall out. Thank you, Mel Gibson, for being a true christian.

Let’s put all in perspective – Romans used three nails on Jesus. It took christians to invent the iron maiden… “Let him who hath understanding reckon the Number of the Beast. For it is a HUMAN number”…

Ground shakes, skies blacken after he dies on the cross. A centurion, quaking in his sandals, “Truly he was the son of god!” Who’s Your Daddy? Earthquake is nice, but would have been more potent display of power if Daddy had stepped in BEFORE Jesus got his ass kicked. And where was Joseph? Deadbeat surrogate dad not in script.

When they take him down from cross, his mother and everyone pose so Michelangelo can carve his Pietà.

Last shot of Jesus the Zombie reanimated with all his wounds healed like Wolverine, except the holes in his hands – which means he “chooses” to keep them. Blue Cross pissed off and refuses to pay medical insurance.

What’s that you say? He not zombie, he not “reanimated” – He Is Risen. Yeah, we have a word for that in Western civilization: Zombie.

But before he was Zombie, he died for your sins, right? Isn’t it great how there’s no more sin?

“Eat my body, drink my blood.” What is this, the Donner Party? God offered his son as HUMAN SACRIFICE. Just like tribal people offering virgins to volcanoes – to atone for the sins of the people, to appease their god. Generally regarded as UNCIVILIZED. (And let’s face it, Jesus, too, was a virgin – unless he got it on with Peter that one time; right about the time he started calling Peter “the rock” – yeah, you know what I’m talkin’ about…)

The moral of the story: create a faulty machine, then send a magical relative to fix the machine by BEING MURDERED. Still doesn’t fix the machine. Tell everyone you DID fix it. Let them argue amongst themselves…

The Newsweek cover story of April 2009, “The Decline and Fall of Christian America,” contends that 68% of Americans believe religion is losing its influence on American life. All I can say is: Thank Fucking Christ!
— Poffy The Humanist (cucumber chapter).
Mel Gibson’s DUI: Jul 2006.
Losing His Religion
DUNMORE RANT:
CALL ME GOD
(and I’ll still respect you in the morning)