When it comes to dying for your country, it’s better not to die at all.
— Lewis Ayres, ALL QUIET ON THE WESTERN FRONT.

The quote from ALL QUIET ON THE WESTERN FRONT may be misconstrued. If there really was such a thing as “dying for your country,” it would be stupid enough, but no one ever really dies for their country – they die to appease the small-penis insecurities and greed of the low, gutless swine who ordered them into war. 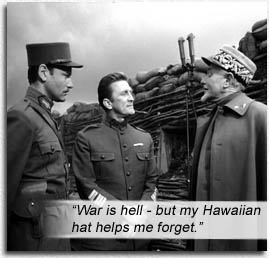 From the book by Humphrey Cobb, Stanley Kubrick directs PATHS OF GLORY – an outraged, frustrated scream against the duplicity, mendacity, idiocy, inhumaneness and ingloriousness of war.

For two years, a platoon of WWI French soldiers have been fighting futilely against Germans in trench warfare. Led by Colonel Dax (Kirk Douglas), they are ordered to storm a German fortification by their cowardly commanders, General Broulard (Adolphe Menjou) and General Mireau (George Macready, who looks and acts ominously like Dick Cheney). The attack is a failure, but the Generals – who think nothing of losing “51-percent casualties for the sake of moving their line ahead,” refuse to acknowledge the impossibility of success or their own lack of strategy and stupidity, and scapegoat three men from Dax’s platoon to be tried and executed for cowardice, as the reason for the failure.

Outraged at the injustice, Dax does all he can to stay the execution, meeting with Broulard and Mireau to plead not just clemency, but to avoid descent into the madness of arbitrary slaughter of their own men simply for the Generals to save face; further, Dax acts as legal counsel for the doomed men. All in vain. High command will have its blood – from the enemy’s side, or their own.

Cobb’s tale has not dated in half a century, its message, its impact, its depiction of low men in high places. Though PATHS depicts French officers heartlessly regarding their men as cannon fodder, the same attitude is adopted by every single faction that enters into war – the high commanders seeing their militia as statistics and the officers closer to the ranks becoming greater idealists, like Dax. (But who am I to talk? The closest I’ve come to trench warfare is taking cover behind rows of school desks and launching lethal shoes at my enemies before the teacher arrived and sent us all to the principal.)

For its unafraid camera (Kubrick pans through rows of trench gutters, over shattered bodies, through glutting mud and ear-damaging explosions – all in stark black and white) and fearless unpatriotic concepts (Mireau orders his own men fired upon to get them out of the trenches, Dax goes hell-bent insubordinate against his superiors to save his men), PATHS inspires outrage, but could it have been all that hard for Americans and Brits to enact these foreign roles so convincingly and make the Froggies look like buttered croissants? Even though Kubrick portrays war as ludicrous on every level, from the fighting to the politics, we are left with the image of the French – not the Yanks or Limeys – portrayed as ludicrous. So ludicrous that France banned PATHS OF GLORY until 1975.

But the searing message is still damning for all nations. PATHS is so disturbing and cloying that the irony of its title is like a sledgehammer to the spine – unlike almost every other war movie existent, from then to now, we clearly see there IS no “glory” in war. And “war” these days covers every underhanded business decision (like George W. Bush’s ignominious Iraq defeat) and political and religious skirmish (from monks in Myanmar to Iranian elections). And the very same contradictory insanities from the high command in PATHS OF GLORY continue right now: The Geneva Convention clearly delineates torture as a war crime (Article 17, Article 130, and others from 1949) – yet George W. Bush tortures in the name of America and remains unconvicted, he jails soldiers who refuse to torture for their disobedience to his dictatorship, then jails scapegoats who DID torture to gain political capital; while Barack Obama allows CIA operatives who tortured to remain free, citing their excuse (“just following orders”) as valid, even though this same excuse incarcerated those at Nuremberg…

From The Dark Side: The Inside Story on how the War on Terror turned into a War on American Ideals, by Jane Mayer (2008):
After some dozen internal investigations, mostly by the military, a number of low-ranking enlisted soldiers and officers were convicted or disciplined for prisoner abuse. But by design, the investigations were focused downward in the chain of command, not up to those who set the policy.

There is no Eleventh Hour stay of execution in PATHS OF GLORY. Kubrick and Cobb are intent on driving home the message that war means the bad guys will always win. Even if they’re supposedly the good guys.