DIE HARD with a Segway.

Kevin James is as funny as he can possibly be in PAUL BLART MALL COP – which means it’s a dull, uninspiring comedy that relies on him falling down and being fat a lot. 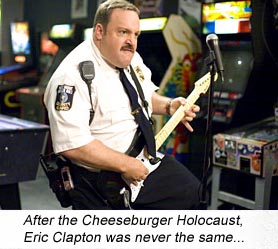 In THE HANGOVER Ken Jeong laughs at plump Zack Gallifianakis clambering out of a car window with the comment, “It’s funny because he’s fat!” Such a perfect encapsulation of lowbrow American humor and the comedic stylings of Kevin James – all he does is act like he’s Not Fat, so when he runs, threatens someone, dances energetically, falls over or assumes dynamic poses, “It’s funny because he’s fat!” Well, in theory anyway.

Paul Blart (James) is an anal retentive security guard (who likes to be referred to as security “officer”), a pathetic loser who failed the police academy, a compulsive overeater who lives with his mother and his daughter, rides a Segway (which isn’t even a gay joke waiting to happen – it’s beyond a gay joke), and has hypoglycemia (which gives him many opportunities to Be Fat And Fall Down). He’s in love from afar with a mall vendor who looks like Anna Faris (Jayma Mays), but she doesn’t like him back. Turns out skinny chicks don’t really fall for fat guys. Who woulda guessed? So when thugs take the mall employees hostage and lock down Blart’s mall, he sees the opportunity to impress the hot chick with his rotund heroism, and goes skulking the corridors of chic like a fat John McClane, against the head thug (Keir O’Donnell) who is a cross between Christian Slater and BILLY ELLIOTT.

To accentuate Blart’s ineptitude, all the henchmen are young, athletic, tattooed, surfer dudes, Parkour runners, skateboardists – oh geez, dial the chill factor down a 7, dudes, before I get a sympathy tramp stamp!

The movie falls flat on its fat arse when a fat mall customer chick starts beating up on Paul Blart for insinuating she’s fat. As comedic beatings go, this one’s about as funny as SCHINDLER’S LIST. A thousand unanswered questions:
1) Are we meant to give her a pass because it’s female-on-male violence?
2) Is it “funny because he’s fat”?
3) Is it funny because SHE’S fat?
4) Is no one allowed to pull these combatants apart – like everyone does in fights – because one of them is a woman?
5) Do they make special clothes for gunts like that?

Score big points for featuring the KISS song Detroit Rock City on a Guitar Hero that Blart plays. Minus those same points for the fact it’s Guitar Hero.

At least the makers of MALL COP (writers Kevin James and Nick Bakay, director Steve Carr and producer Adam Sandler) can say they beat Jody Hill’s minimally superior OBSERVE AND REPORT to the cinema, which patently ripped off this story, populating it with characters that even looked like all the characters in MALL COP. There is even a slogan above the door of the security office: Detect Deter Observe Report. (Who started production first? Was it a race between two plagiarists? Which poor writer who will never get credit inspired the writers of these two copycat movies to steal his mundane story?)

It’s a fly in the ointment flow chart; it’s a hero’s redemption arc; it’s Blart as McClane. Only fatter.