Kind Encounters of the Close Third.

It’s a buddy comedy of the crude kind, a road movie of the chase kind, a close encounter of the third kind! 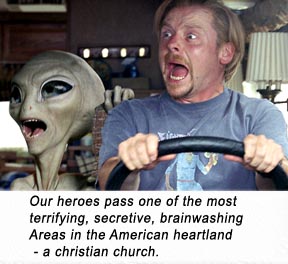 Hey, isn’t that Roger from AMERICAN DAD? Or do all aliens just look alike to me?…

Two Brits on a pilgrimage to famed UFO sites in Nevada pick up a real extraterrestrial alien on the run, named Paul, and find themselves targets of a manhunt (a little green man-hunt) from government spooks (Bill Hader, Joe Lo Truglio and FBI agent Jason Bateman, playing it cooler than a polar bear drinking Coca-Cola).

Simon Pegg and Nick Frost are the two Brits, Graeme Willy and The Writer Clive Gollings (that’s how he introduces himself – hilarious! I gotta start doing that! – for the sci-fi story he has spent his adult life penning, with Graeme providing the cover artwork – a hot alien chick with three breasts, which seemingly has the same effect on everyone, human or alien, without even reading the story – “three titties: awesome!”).

Pegg and Frost (as co-writers of this film) do a great job of capturing that uncomfortable vestige of American jingoism when they ask a Mexican concierge, “Do you believe in aliens?” and he suspiciously replies, “What do you mean, ‘aliens’?” 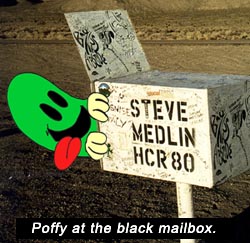 Alien Paul is a CG entity thrown amongst this real life comedy, styled after the infamous “grays,” with big eyes, big head and tiny gray-green body. Voiced by Seth Rogen, Paul is pretty much just an easygoing stoner dude, who has been filling his time on Earth since his crash landing in the 50s working with the government and dabbling in giving Spielberg movie ideas. Now he’s on the run from that same government, and lamenting that all his fictional ideas – like Mulder and Scully – are being attributed to others.

The trio pick up Creationist fanatic Ruth (Kristen Wiig), whom Paul mind-melds with to make her understand evolution, whereupon she realizes she can fornicate and drink and cuss all she wants. The great character actor John Carroll Lynch joins the chase as Ruth’s bible-thumping father.

Add points to movie for its atheist stance. Paul laments about Creationists, “You just can’t talk to these people!”

Subtract points for the character paradox: UFO fanatics Graeme and The Writer Clive Gollings claim to be “men of science” and they poo-poo Ruth claiming the Earth was created in five days and is 4,000 years old. And so they should… Yet they believe the government is hiding crashed extraterrestrial spacecraft at Area 51. You just can’t talk to these people!

PAUL is a fun romp across the Nevada desert, a straightforward action chase comedy, yet the story contains a lot of heart and is touching in places, with the payoffs hitting well; with innumerable nods and winks to iconic extraterrestrial movies, among others, E.T., ALIENS, STAR WARS, and the greatest extraterrestrial movie of all time, CLOSE ENCOUNTERS OF THE THIRD KIND. We even see the greatest alien fighter of all – Sigourney Weaver in a surprise cameo.