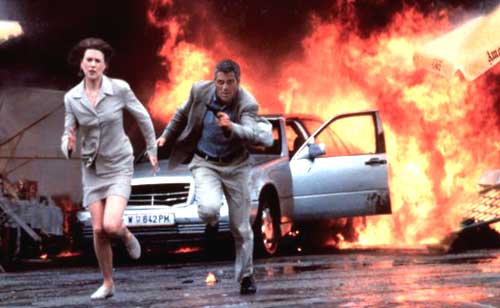 A Flowerpot Man and his tight-skirted secretary were unharmed today in an explosion which wiped out two city blocks.

In movies of this ilk, the American Military is omniscient, portrayed as so technologically advanced they can pinpoint license plate numbers half a world away; relishing showing off their spy-satellite capabilities and infiltration devices – yet never putting that technology to use in deterring the theft of nuclear weapons in the first place. They seemingly only use these gadgets to sell your confidential details to lowlife corporate bidders; to conveniently lose your records when you report an identity fraud and to send you garbage-loads of junk mail whenever you purchase a new electronic appliance with your credit card – instead of doing something important like capturing Osama bin Laden. As Devoe says, “Toil Is Stupid.”

Kidman is the token “sexy woman in power,” incessantly battling to be taken seriously in a Man’s World – until man-toy Clooney turns up and cows her with his head-waggling and tacit indications that she might soon be allowed to touch People’s Sexiest Man Alive 1997.

Poffy Devo:
Are We Not Cucumbers?

But they get too busy to get busy, barking orders at everyone within modeling distance, as is the manner of Nuclear Threat movies: walking through office hallways hastily (glass doors and staircases, add extra points), handing off reports, getting reports handed to them, hectoring underlings to get “the President” or “the head of [insert Department]” on the phone, reeling off statistics and information to each other, extras with one line updating them on the crisis situation (oh joy! – one step closer to a SAG card!) – doesn’t anyone in the star’s walking trajectory ever have something that they should actually be doing at the time they’re lining the star’s route being barked at?

Meanwhile, something of world-shaking and head-waggling import is happening – but in Nuclear Threat movies I can never quite scare up the interest to find out what. Ultimately, the Russian plot to blow up the United States grinds to a standstill through the efforts of the poreless Kelly (whose bra is always tantalizingly translucently apparent through her secretariat blouse) and the head-waggling of Devoe (who is air-lifted onto a truck which hangs off a bridge in classic Vehicle-Hanging-Off-Bridge position, leaving him just the right amount of time to Get The Hell Outa There before it falls).

Flowerpot hats off to Devoe, as all the stolen nukes are accounted for – but one! So begins the final idiot act of the movie – congruent with the final idiot act of a desperate terrorist (played by a non-threatening, apathetic Marcel Iures), who has the opportunity to detonate the nuclear device in his backpack at any time – keeping in mind that a bomb that powerful would do the same amount of damage no matter where it blows – yet opts to mill aimlessly through New York streets, presenting himself as a target for military rooftop snipers. Despite Devoe’s imprecations of “Are We Not Men?!” the snipers refuse to take out the Russian, due to curly-haired American kids getting in the way (strange, that’s never stopped them in real life…).

When the movie degenerates to the final chase sequence, Devoe gets to perform the action hero staple of Running Over Car Roofs and Sliding Over Car Hoods like a TV cop – he even gets to knock over a homeless guy with a shopping cart! This movie has everything!

Finally we meet the star of our show – The Bomb – replete with easy-to-read big red digital numbers ticking down (Sesame Street was so proud they dedicated a sock puppet to Devoe), which Julia must defuse. And the big red numbers only give us two minutes to think about how predictable this whole scenario is – as if the film-makers would risk mussing Nicole Kidman’s makeup by having a bomb explode in her face. But wait! – there’s more malarkey: we are told – via Julia’s harried and wholly specious dialogue – that this contraption is a “bomb within a bomb”; that there is a small “normal” bomb that they can detonate which will actually negate the detonation of the “nuclear” bomb, so we can still have our climactic ending (the Pretty Orange Explosion) and yet save civilization! (Can I slap someone now, please? Preferably the writer.)

Diving through a stained-glass window with an explosion at your heels apparently only sustains a few minor scratches to the forehead, no worse than falling off your bike on some soft grass. “It’s a beautiful, beautiful world!”

Let us not forget the pat Hollywood epilogue: Julia does laps in a pool while Devoe appears to make energy-dome innuendo about “whipping it good!” after she emerges. Not that she has any choice in her future bed-partner. As Devoe once sang, “Freedom of choice is what you want / Freedom from choice is what you got.” He is, after all, a New Traditionalist, and one of the Ten Commandments states, “Thou shalt not end a Major American Studio Movie without the heterosexual couple spanking it, to please the slack-jawed masses.”