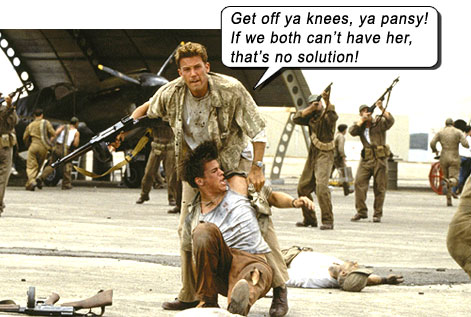 In garish detail and stunning investigative probing, PEARL HARBOR digs deep below the surface of the gasoline embargoes and jingoistic fomenting and reveals exactly what this WWII conflict was all about – the love triangle between three young American Models.

You see, Ben loves Kate. And Kate loves Ben. But Ben’s best friend, Josh, also likes Kate. And there’s a war with Germany or something happening. Ben is a hot pilot, and reports to somewhere overseas that is Not America for hot dogfights that make his biceps thrum with the need to hold Kate.

Now Josh loves Kate. And Kate loves Josh. But Ben comes back. And he hits Josh for falling in love with Kate. Then they have a beer. And then the Japanese attack Pearl Harbor. The end.

Don’t even want to go into the real politics behind that Day of Infamy, December 7, 1941, when the Japanese launched a surprise attack that wasn’t really a surprise on the American Pacific Fleet anchored at Pearl Harbor, on the Hawaiian island of Oahu. God knows, director Michael Bay doesn’t.

Remember, if it weren’t for those young models in love, none of this woulda happened. Written with emotive overkill by Randall Wallace (BRAVEHEART, 1996, THE MAN IN THE IRON MASK, 1998), HARBOR reminds us of TITANIC (1997), where the insufferable love story sucked all the oxygen out of the movie until James Cameron redeemed himself with that magnificent CGI boat-tipping.

Michael Bay movies are like the women I date: beautiful but stupid. Discounting the three-way pap between Ben Affleck, Josh Hartnett and Kate Beckinsale, PEARL HARBOR’s redeeming war scenes are why we go to the movies: fictional cinematography at its best! And by that I mean, this attack is not really happening, but onscreen, with CGI, models, mattes, process shots, etc., Bay has created Real War, scrappier and more authentic than every single war movie released before 1998. Spielberg never took to the air in SAVING PRIVATE RYAN (1998) – he still holds the crown for best ground skirmishes – it takes Michael Bay’s sweeping cranes to now claim the crown for best air-to-sea battles and best dogfights. Affleck gets to fly a Spitfire – the coolest fighter plane ever – in rampaging skirmishes that put us so square in his hot pilot’s combat seat that we can feel the sweat puddling on the backs of our patriotic thighs.

The scenes of the stealth Japanese planes flying low over American farmers and people out enjoying the world, thinking the war was in some other country, look surreal enough now – imagine how it must have looked in 1941. The thunderous grumble of amassed Zero engines splitting the rural morning, each plane loaded with one bomb each, tilting low over fields and schools, under American radar, Bay’s characteristic American Blond Kids in slow motion below them.

The Pearl Harbor attack is launched with a tracking shot of a bomb loosed from a Japanese plane down to the USS Arizona, silently falling, then exploding and actually undulating the ship like a steel snake spasming. From there, the incredible realism of old school battle is more exhilarating than walking in on Kate Beckinsale sandwiched between Ben Affleck and Josh Hartnett.

Bay and cinematographer John Schwartzman have such a knack for creating iconic images that even whilst we cringe at the melodramatic slomo and hero framing of certain scenes, they wring a tear as well, with their beautifully evocative composition. The art overshadows the story.

Beckinsale – ever the female double standard bearer – asks boxer/cook, Cuba Gooding Jr., “So why do you have to fight with your fists to get respect?” completely forgetting that her own boyfriend is gunning down strangers in planes to keep her respect, with his big Spitfire-shaped penis.

Kate tells Josh as he’s going off to war, “I love you and I’ll be here waiting for you when you come back.” Of course, that’s provided you don’t go MIA and my thigh twitch compels me to turn to the Next Best Thing…