Sunny, with a chance of homicide. 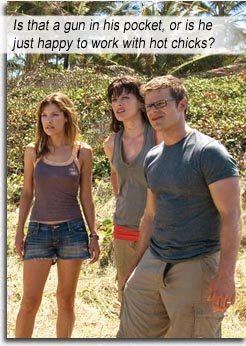 Remember when it was cool for a movie to have a twist? Even a bad twist was a Good Thing. Then M. Night Shyamalan came along and gave us The Greatest Twist Of All in THE SIXTH SENSE… and screwed it up for everyone. “Twist” has become a bad word over the last decade, and people only discuss “twists” of movies to weed out the less sophisticated who never saw it coming, disparaging them as if they have no sense of story structure like THEY do. I don’t know how this elite poo-poohing of twists has come about. All I know is – I still get that boyhood thrill when a filmmaker can put it over on me for a length of time – and then, after revealing the Big T, still pour on the storytelling to the end.

Writer-director David Twohy gives us some fine twists in PERFECT GETAWAY, a tension-soaked thriller that ratchets suspense not unlike a junior Hitchcock or Tarantino. (Twohy is probably better known for those Riddick movies (PITCH BLACK, 2000, and CHRONICLES, 2004) which took themselves a tad seriously, but his 1996 THE ARRIVAL was more along this movie’s lines – a suspenseful, surprise-filled actioner with Charlie Sheen discovering extraterrestrial aliens infiltrating human society.)

Cliff and Cydney (Steve Zahn and Milla Jovovich) are a dorky, good-looking couple honeymooning in Hawaii, who hear of a murderer couple who have just escaped capture on the island of Oahu, where they just came from. They meet and tag along with dynamite-sexy adventurer couple Nick and Gina (Timothy Olyphant and Kiele Sanchez). Skulking on the periphery is ripped hippie couple Kale and Cleo (Chris Hemsworth and Marley Shelton).

Through dialogue and misdirection, Twohy strings us along jungle trails, in a well-constructed, simple but effective story, where every couple fake-smiles and secretly suspects each other couple to be the Oahu killers trying to blend in to escape notice, with all of them giving each other good reason to suspect.

It doesn’t hurt the production that there are sexy chicks in bikinis at every eye-candy turn.

Timothy Olyphant has The Cool Role, as some kind of covert ex-special forces operative, a self-proclaimed “American Jedi,” whose outlandish anecdotes seem like pandering to Cliff’s screenwriting proclivities.

Twohy throws in a few minor characters that all sport that suspicious glare to throw us either on or off the track. And some fine split-screening and extroverted gore keeps the action tight.

Can’t say any more for fear of ruining the tale – come on, you don’t REALLY want to sacrifice pant-tearing enjoyment for stink-nose sophistication, do you?