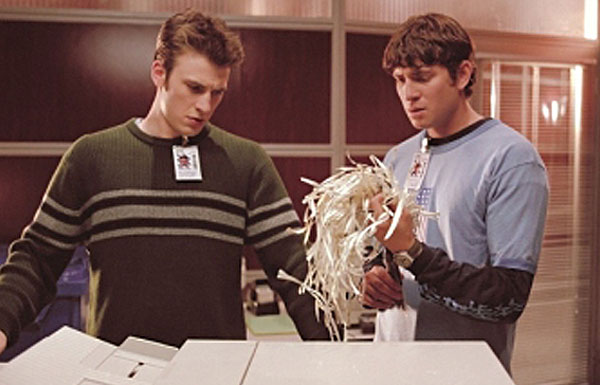 Unable to tell the difference between a photocopier and a shredder,
will stealing test results make ANY difference?

The specter of Jerry Falwell and the misnomered Moral Majority loom large over THE PERFECT SCORE, a quarter-witted tale of half-witted “teens” who steal the answers to an SAT test, then choose not to use those answers, when they realize their motivations for stealing were simply due to bad screenwriting.

It all seemed to be going so well: stylistic introductions to the principals (Erika Christensen, Chris Evans, Bryan Greenberg, Leonardo Nam, and a loving shot of Scarlett Johansson‘s panties) succeeding in keeping me off the streets and in my seat for the next 80 minutes, a failed first robbery attempt, a new plot hatched, a fortress breached, a test stolen – and ultimately, one of the accomplices sacrificing his freedom for the sake of Scarlett’s joyous panties. It was this last incident which affected the clique of teen thieves as adversely as the asteroid which ploughed into the Yucatan Peninsula 65 million years ago precipitating the extinction of the dinosauria. 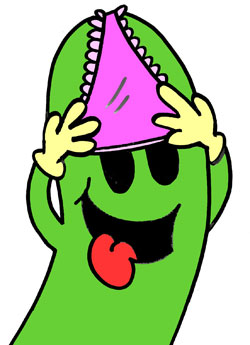 Witnessing their buddy being led away in handcuffs apparently set Epiphany bells a-ringin’ in the thieves’ well-toned breasts, and instead of simply going through with the test, answers at the ready (up sleeves, down socks, peeking from push-up bras), each character, which the film-makers tried so hard to flesh out in pockets of meaningful dialogue intersticed between the dramedy, suddenly re-write themselves from a morality handbook on Christianity via Sesame Street. Effectively nullifying the previous 80 minutes of plotting and motivation and character development.

We’re not talking “character arcs” – we’re talking re-rendering the characters altogether. No matter where their motivations were apparently leading them, the denouement saw them recant their renegade characters outright. You mean we invested all that time rooting for these perfect-complexioned outlaws only to have them lose their balls in the final act?

One of them spending the night in jail for robbery (and his subsequent sentence and criminal record) should have sent these twenty-something teens into a recidivist funk against The System – instead, the one who gets nailed (Greenberg) comes out a happy man because Scarlett suddenly wants to nail him for no apparent reason (guess she digs the tall, spineless type); the Smart Girl (Christensen) goes Ho (having realized, I suppose, that it’s easier to use your ta-tas than your brain); the Ball Player (Miles) goes Oedipal under his mother’s iron hand, and the Bong-Stalker (Nam) feels that cheating would skew the results of the SATs unrealistically, so hands out the answers to other deadheads like himself (which would result in skewing the results ANYWAY, right?).

And the leader of the gang, All-Amurrican Whitebread with the metric pound of gel in his hair (Evans), gets a mother-to-son talk from his older brother, played by Matthew Lillard aka Shaggy (Yoiks! Who knew Scooby Doo’s master could be so lucid?), which makes him Go Jesus and forgo his cheat-sheets. Peer pressure – even from a guy whose only friend is a talking dog – is a powerful thing…

How did the movie derail so nastily? It’s called Pandering to the Whims of Focus Groups: Society’s perception, channeled through the lowest common denominator, decreeing immature resolutions to shallow, inoffensive movies. It’s the Focus Group ruling that No Teen Model Shall Be Seen Cheating, so everyone with a hot butt comes to some inane reconciliation with their inadequacies – and still pass. And if they chose not to sit for the test, well, they still make good in the Real World; shiftless or otherwise, they all achieve social and financial success. Cos they’re Teen Models. And a hotty butt will always trump a smarty pants.

But notice how the film has no qualms in portraying disheveled drug-mongers getting away with cheating? Because that’s what the WASP MILFs and whitebread nanas want you to see. Because Focus Groups decree that All Unkempt, Unshaven College Males Are Immoral Junkies: dem Debbil-Chillun wid dem long hair and dem stanky teeth. While Falwell’s specter cackles in glee…

Was the film trying to tell us that SATs really don’t count for what you make of your life (after establishing in the opening titles that “all those other tests are what you were – the SATs are what you will be.”)? Did the heist lead these kids to a better place in their psyches, allowing them to attain that “perfect score” with their careers? Bodacious, dude!…

I should have quit while I was ahead, as the film lived up to its title in its first ten minutes, when Scarlett’s knickers were so close to my face I could touch myself – perfect!