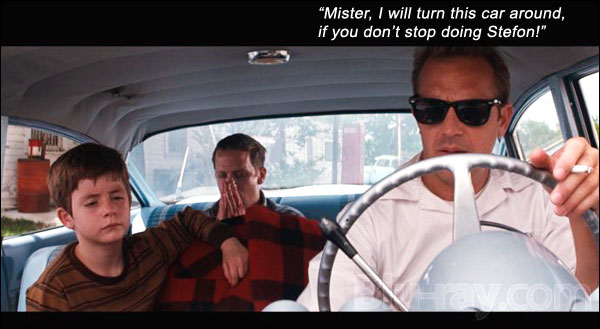 A Perfect Vision of an Imperfect World.

Nature versus nurture. Fathers versus sons. Justice versus The Law. T-bones versus tater tots.

The power of Clint Eastwood’s films has always come from Eastwood’s bravado in addressing moral ambiguity. (Even his death-dealing avenger films – the DOLLAR trilogy, JOSEY WALES, the DIRTY HARRY series, etc. – are so powerful not because of his avengers’ acts of righteousness, wrath or revenge, but because the camera never shies away from revealing the darkness of its “heroes.”)

Of all the films Eastwood has directed and/or starred in, A PERFECT WORLD is the first where he has consciously and willfully removed his domineering presence from the limelight of the leading role, thereby allowing a clearer vision of the themes so often obscured by his camera-hogging avengers.

Set in the ’60s, when it was still feasible to escape prison via a fashionable hole-in-the-wall, the story follows escapee Butch Haynes (Kevin Costner) and his young hostage, Philip (7-year-old T.J. Lowther), keeping one step ahead of a manhunt across Texas helmed by Sheriff Red Garnett (Eastwood).

As the story follows both hunter and hunted alternately, we realize that each is not a cut-and-dried representation of “good” or “evil” and by movie’s end, director Eastwood and writer John Lee Hancock, as well as superbly nuanced performances from the cast, make us doubt exactly who the bad guy is, or whether this movie had any “bad guys” at all.

As implied from his rap sheet, Butch seems to possess the genes for his profession – but the question arises (via Laura Dern‘s criminologist, Sally Gerber, saddled on Red’s manhunt for political reasons) as to whether Butch’s broken home, prostitute mother or abusive, criminal father nurtured the low road.

Like every psychotic who tries to assuage an unquenchable emptiness, Butch, “raised in a dime-a-dance whorehouse,” with an ingrained suspicion for father figures due to his “old man not being worth a damn,” develops a paternal instinct for his hostage, unconsciously becoming the father that he himself wished he had. When they steal a picnicking family’s car, Butch chastises Philip for laughing at the father for surrendering the car so quickly, saying the protective father was “a fine family man – that’s about the best thing a fella can hope to be.”

In his direct street vernacular, Butch schools Philip on the morals of stealing, the futility of religion, even reassuring him on his “puny pecker.” It is scenes like this last one where Eastwood shows his mettle. He has never shied from “anti-social” elements (indeed, most of his characters are “anti”-heroes), yet in an over-sensitive society which pules at the slightest innuendo that imperils children physically or psychologically, Eastwood lets his camera play over scenes which would make a less talented director quake in his boots over the ensuing public outcry: non-violence lobbyists could have targeted the scenes of mistreated children; gun-control noisemakers could have a field day over the scenes of children wielding guns; and the child-porn doomsayers might easily have taken issue with Philip’s superhero-small underpants (in which he spends the whole first act) and the fact that his pecker is peeked at by grown men, one who insults him and the other who reassures him. Eastwood never plays these scenes for prurience, gratuitousness or advocacy – they are integral to the power of the story, and it must have taken an immeasurable force of will to convince the blockheaded MPAA not to perfunctorily excise these aspects.

It’s good to be The Clint.

A PERFECT WORLD moves at a rapid pace (though its actual “action” scenes are no more than nominal car-chases and threatening behavior), the writing so sharp that Butch’s psyche is revealed in almost every line of seemingly innocent dialogue, one astounding scene establishing him as both didactic and insane, when he elucidates to his escape partner, the ignorant and volatile Pugh (Keith Szarabajka), the difference between “threat” and “fact” in a nose-shattering lesson. When Pugh hisses, “I’m gonna kill you for that!” Butch replies: “And that’s a threat.” 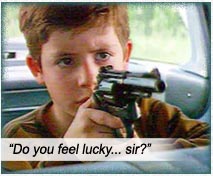 Young hostage Philip, whose father “ain’t around,” bonds with Butch as the powerful, albeit unbalanced, father that he needs to segue into manhood. Lowther, in a heavily emotional role which would be burdensome for an actor of any age, is nothing short of brilliant, retaining a sad and trusting ingenuousness, thankfully never stooping to insufferably precocious or ingratiatingly cute. The film might have degenerated to the cliché of both protagonists finding in each other what was missing from their lives, but the resolution of their relationship is as far from Disney as Clint Eastwood is from Ryan Seacrest.

We discover that Red Garnett may have inadvertently been responsible for Butch’s low road, as he confesses to Sally that when Butch was still a juvenile, it was Garnett who “bought that judge a t-bone and told him to send the boy up” for four years for a small crime, believing it would curb young Butch’s criminal leanings. He was wrong. The ineffectualness of the criminal justice system is obvious (rehabilitation simply being a taxpayers’ black hole, serving as delayed recidivism), working against the very people it supposedly serves – the cops and the robbers. Red, like Butch, would have been damned either way.

The Perfect World of the title may refer to nothing more than Butch’s dim idea of a goal – Alaska – which he bases on a lone postcard from his no-good dad; one perfect picture representing a life Butch will never attain. But it may also refer to the kind of life Butch tries to make for himself in the present. Even though his paternal instincts eventually flare up into psychosis, which proves his undoing, for one brief moment, Butch seemed to have a perfect world of his own design: he got the chance to impose his notions of parenthood on parents who took their influential roles for granted, played the role of a father himself and, most importantly, gained the unconditional love of a child who made him feel like his “parenting” was a success.

The final scenes, involving the gaff-taped family and Philip’s wrenching decisions and devotion to Butch are as disturbing as they are moving. And as the stirring score of Clint regular, Lennie Niehaus, accompanies Clint’s trademark final camera pan over the landscape, Butch’s unflappable last moments may signify that he has realized a final perfect wish in this imperfect world – to die a free man.

A PERFECT WORLD is one of Eastwood’s best films.

And that’s a fact.