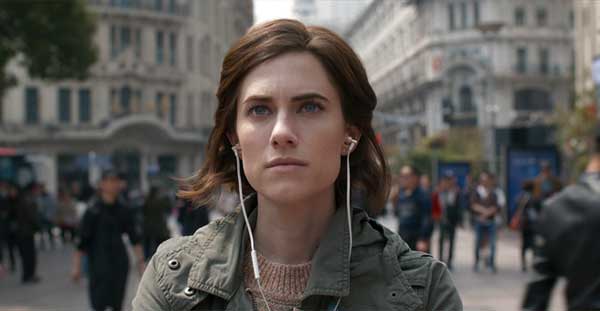 Perfection – it’s what young cellist Lizzie now has, under the tutelage of mentor Anton, from the prestigious Bachoff Institute. It’s what Charlotte once had, under the same tutor whom she left a decade ago, to care for her dying mother. Now Charlotte’s back, after her mother’s passing, bringing all the baggage of her past torture—uh, practice, to re-achieve her previous perfection…

Striking Logan Browning is Lizzie, with eyes that would burn a man to ashes, and Allison Williams (GET OUT) is Charlotte, with a jaw so sharp it would cut your inner thigh. Two cellists with an aching respect for each other that translates to open lust. We can’t figure who is seducing who as they watch a recital produced by Anton (Steven Weber, devilishly fey) and use their fingers as only cellists know how.

We would discover the title cards that open each act hold a double context, i.e. what we think is the “mission” is a façade to disguise another mission.

At an event in Shanghai, Charlotte petitions Anton to take her back into his exclusive school. Anton is evasive, yet makes Charlotte the impromptu judge of a cello competition. (Talk about whitewashing: they’re in Shanghai, judging three young Asian girls – and none of the judges are Asian!)

Anton cajoles Charlotte to play a duet with his jewel, Lizzie. Charlotte is so out of practice – they end up in bed together. One phrase has nothing to do with the next, but when you’re talking lesbians, who cares, right? Lizzie has planned a vacation, and convinces Charlotte to tag along. It seems Charlotte’s mission of inveigling herself back into Anton’s school is derailed, but au contraire, her mission is right on track…

On the bus to adventure, Lizzie feels nauseous. Are the contagion rumors in Shanghai true? In the most intense scene of the movie, Lizzie starts vomiting in her seat, yellow bile filled with maggots, crying in agony, screaming for the bus to stop, yet not able to take a step toward the exit or she’ll “shit her pants”!

CUT TO: both our ladies 20 feet outside the stopped bus, in the middle of nowhere, torment on Lizzie’s face, with the bus driver swearing at them in Mandarin as he sloshes a bucket of water over the bus exit steps—Oh. My. God! The social horror is so extreme at this point that we wonder if this is a dream. As the bus pulls away, Lizzie screams in horror at the maggots crawling out of holes in her skin! Charlotte, impassive this whole time, now offers, “You know what you have to do!” and – like a cartoon, out of nowhere – she produces a meat cleaver! This has GOT to be a dream, right?

After a horrifying GLETCH! sound, the film rewinds like analog tape – we can see it reversing at great speed… to reveal something integral we didn’t see earlier. It makes it seem like the motive is jealousy; vengeance on someone who took her place… Was this Charlotte’s mission all along?

Now the reveals and twists come legato and crescendo, as Lizzie turns up at the Bachoff Institute, where Anton resides and teaches with his wife and musical partner Paloma (Alaina Huffman). As they prep a young cello student for intake, there is something lascivious about the way Anton calls in two middle-aged men to enjoy the lone student’s recital, Geoffrey and Theis (Graeme Duffy and Mark Kandborg), while he rests his twitching fingers on the young girl’s shoulders.

One of Lizzy’s hands is cleanly amputated at the wrist. She tells of Charlotte’s treachery, and seeks solace, comfort, any kind of help, from what she thought was her unconditional family (“I’ll teach, compose, scrub the toilets…”), but as a damaged instrument, she is turned away, in a horrifying display of callousness from Anton.

And Charlotte enters the story again, sforzando, to fulfill her actual mission. In the film’s opening, a clue to Charlotte’s resolve and stoicism, as she stared dead-eyed at her lifeless mother on the bed. Though her mission is altruistic, it reveals how twisted the mind of a cellist can turn. (Thank goodness my brother gave it up. Now he’s just a vocalist, guitarist and keyboardist – meaning he’s even more twisted.)

Amidst an inspiring orchestral score (featuring Bach, Mozart, Handel), THE PERFECTION (directed and co-written by Richard Shepard) careens around blind corners and blood gutters, chained cellists, stump-rape, mutilation, re-directing our sympathies constantly until its final frames, which ramp up the body horror to proportions so agitato, you will find yourself laughing to stop yourself from screaming naked down the street. Fortissimo!