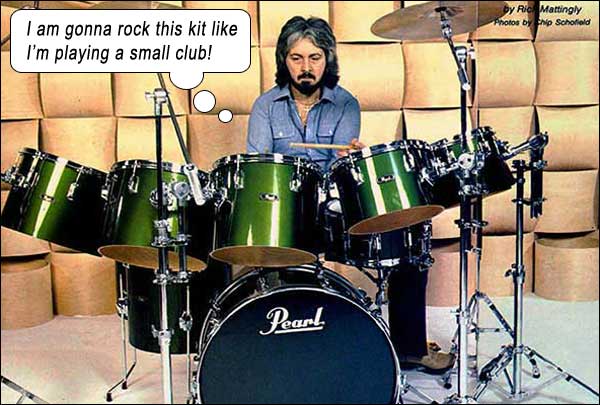 From KISS to this…

KISS ex-drummer Peter Criss started recording his second solo album, Out Of Control, before he was officially out of KISS (March 1980, officially fired from KISS in May 1980), and it is the fame of his former band that is the sole problem behind this watery album’s seeming lack of direction. It almost hits the mark, if only Criss knew what mark he was missing.

Coming from a background of jazz/r&b, Peter Criss (born George Peter John Criscuola) somehow gelled with the New York hard rockers KISS and helped forge their brand of iconic cock rock in the mid-70s. Unfortunately for Criss, KISS became the biggest band in the world for a short period in the late ‘70s. That leaves an indelible stamp, rightly or wrongly, on each member of the band. Criss’s first solo outing (Peter Criss, 1978, released while still with the fearsome foursome) proved that any departure from the driving animal rock of his parent project would be met with curious dismay if not outright contempt; laden with ballads, soul and samba, his album sold the least of the four hard-rocking Solo Albums released by KISS simultaneously as a superhero stunt gone slightly awry. 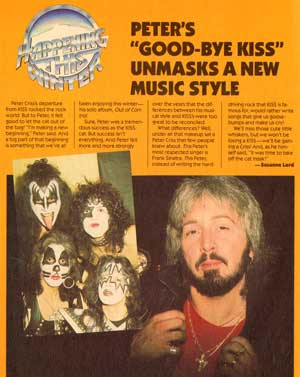 News of the world… kinda.

Now Peter’s taste in music is his business. If he wants to compose and perform soft rock, well, shalom and peace and assalam aleikum, brother man. Problem is: music is his “business,” so his non-hard-rocking product would be an uphill marketing battle for Casablanca Records. In retrospect, knowing what an unambitious layabout Criss would become, he probably didn’t realize at the time how fortunate he was in retaining a record contract with KISS’s label, Casablanca, although we must consider that having the two acts on the same label, which was struggling at the time, might create a battle for funding, i.e. Which album should we funnel our marketing budget into, that will produce bigger monetary returns? The 7-year phenomenon about to release their 8th album, or the drummer of that phenomenon that was fired, whose solo album was the worst-selling in our 2.5 million dollar marketing push in 1978? In the end, Casablanca went bust after Criss’s next album in 1984, Let Me Rock You. KISS went on to Mercury Records. Criss may as well have gone to the planet Mercury (his next solo release would be Cat #1 twelve years later).

The Album Peter Criss was burdened by the fact that Criss came from a genre that touted his proficiency as a DRUMMER and a HARD ROCKER, yet there was not one song on that album that showcased either of those elements. Out Of Control suffers the same burden. And suffers the same end result – no tasty drumming and no real crunchers. It’s not a bad soft rock effort, but is definitely not a progression or a lateral move from his previous post as drummer for a pawdying supergroup, which would have disappointed many KISS fans from the get-go. Marketing Criss in another musical genre from his demonic ex-band would have been almost impossible, with the media saturation KISS had enjoyed in the late 70s. Unless Criss did a saturation-level junket tour himself, hitting every AOR radio station in the country, and making himself known to every fan of the Doobie Brothers, Steely Dan, Kenny Rogers and Chicago, he would never find his true audience.

Strangely enough, at this point in their career, KISS themselves were also leaning in a direction other than hard rock, with their second faux-disco album Unmasked (May 1980). Ironically, Out Of Control is actually “heavier” than some of the sinful froth on the grooves of Unmasked.

As with his first solo album, nothing on Out Of Control is noteworthy as a drumming piece. I mean, even if you hated rock because you claim to be a jazz drummer, at least give us some tasty beats – as an example, the intriguing little figures ghost-drummer Anton Fig taps on the intro to KISS’s Torpedo Girl (from Unmasked), or his neck-snapping interlude from Two Sides Of The Coin from the same album (at 2:06).

I guess good drumming is too much to ask of a drummer. 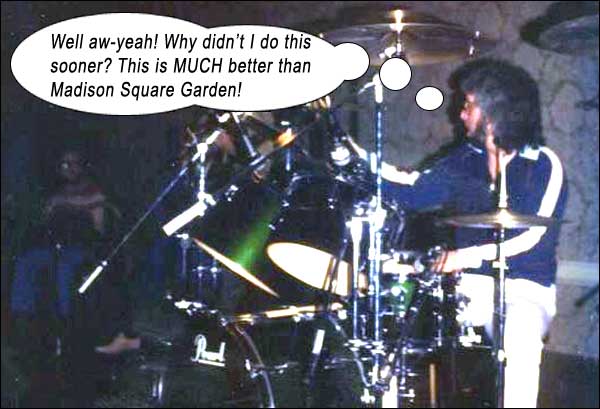 By Myself.  A portentous guitar-picked ballad opens the album, only serving as a wink to KISS fans; meaning nothing to non-fans, it only serves as a weak opener. Not a bad song, but the choice of a ballad as opener is just silly. First words we hear from Peter Criss, recently ousted from the world’s top band, “By myself / Starting over again / By myself / Looks like this time I’m on my own…”

Loathe as you may be to commend anything from the guy who started the dissolution of your favorite band, this is a passionate, self-evaluating little ditty, with Peter’s voice sounding well-seasoned, the grit that some called the “best voice in KISS” plaintively lamenting his plight.

If you know Criss, you know he’s no musician, so any musically decent output of his has been written by his ever-present co-writer Stan Penridge. Peter’s method of songwriting was writing lyrics and humming something to Stan, or just letting Stan put down all the music (a little like Bernie Taupin and Elton John). Practically all the songs on Out Of Control are co-penned by Criss and Penridge.

In Trouble Again, Peter kicks it into rock gear… well, “kicks” it as hard as a jazz drummer trapped in a rock band for 7 years can. So it’s really kinda gently nudging it with his toe. But it does have some actual snare fills. And some sweet cowbell. Again, it’s good rock and roll, which does have legs, meaning it has not dated after 37 years.

Where Will They Run? Peter goes full Hall & Oates. 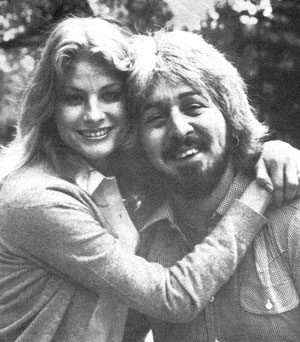 Debra Jensen, Playmate of the Month Jan 1978, grabbing her pussy.

I Found Love. Experimentation in Totally 80s Claptrap, with banging piano/clav sound, fake violin sounds, big choral harmonies, and straight-ahead drumming. The lone single from the album is, I presume, an ode to Peter’s new wife, Debra Jensen (Playmate of the Month, January 1978) whom he married in 1979. (The blonde woman in the foreground of the cover artwork is inspired by Jensen.) It failed to chart.

There’s Nothing Better. A jaunty I-IV-V rock and roller that Criss wrote — ahem, I mean Penridge wrote – for KISS’s Dynasty. It could have replaced Hard Times or Save Your Love, and helped that album. See? It’s not all bad, Peter-Loonies.

Out Of Control. Starts like typical 80’s fare, with plodding piano beat, then goes into an MOR groove and banal words about “Baby you drive me / Out of control.” It must be noted that Criss’s raunchy rasp is one of the album’s exemplary features. No doubt the guy has the truest of rock and roll voices.

Words. A tuneless light rock song about Peter’s only contribution to his songs. I guess.

You Better Run.  The 1966 Top 20 single from The Young Rascals (written by Eddie Brigati and Felix Cavaliere) is given the MOR Criss treatment, which tilts at heavy duty, then moves into a lighter shuffle. Lacking the urgency of the original with its driving organ, by this point, Peter seems to have lost conviction. In a song about seeking vengeance on a woman who has wronged him, you’d think he’d employ just a little more of his vaunted grit, to let that chick know he’s at least half-way serious.

My Life. A rocker that opens with promise, loses its promise, then turns into a platitude. “There’s so much I wanna do / My life is gonna be something!” This is what it would sound like if an alcoholic sang the posters on AA walls. “This time it’s gonna be different / My life is gonna start today!” Then a strange line: “Baby, I know what I’m doin’” Uh, Peter, you don’t. 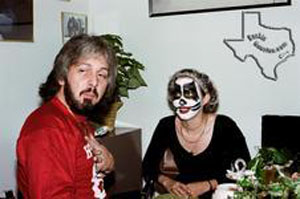 “Dude, I am so smashed… Have I got my makeup on, or did I paint it on someone else again?”

Feel Like Letting Go. And Elton John wept (as someone tried to play piano like him and failed the emotion). “Feel like letting go / But my hope keeps saying no.” Is this an inspirational gospel album? Time has proven these are all just meaningless platitudes. Peter had bought into his own myth – that he was worth something because he was in a world-shaking band. He always boasted that he wrote their biggest-selling single (Beth), always confusing the band awards for personal awards. Now he WAS on his own, and the jungle he claimed he came from was quickly closing in on him.

Criss makes the mistake that he needs to have bridges in his songs (what John Lennon dubbed “the middle eight”). In more than one song in this collection, he loses the tune and thrust by meaninglessly inserting a bridge that is not required. Blame Stan Penridge. I’m sure Criss will.

As Time Goes By (intro). Yes, the staple classic from the movie CASABLANCA (written by Herman Hupfeld). Criss feels the need to end the album with a little Easter Egg: he sings only the first two lines, then the music ends, “You must remember this… a kiss is still a kiss…”

Uhm… Funny? Quaint? Intriguing? How do we take this? As a final show of affection for his bandmates? Peter reminding us he was in KISS, so please buy his album? A winky nod to The Boyz, whom he KNOWS will listen to this album, if not for pleasure, then at least to critique or laugh at? I can see Peter back in 1980, thinking this was such a groovy idea, such a twist, such a stinger to his great offshoot rock and roll show… Uhm, nope. 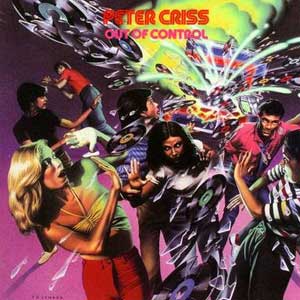 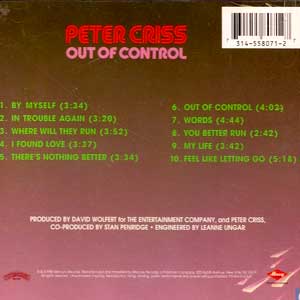