Long before John Travolta and Forest Whitaker turn Earth into a battlefield for L. Ron Hubbard in BATTLEFIELD EARTH, the Psychlos envoy (Travolta and his mildly-retarded lieutenant, Whitaker) inhabit a small midwestern American town, pretending to be human, in PHENOMENON. 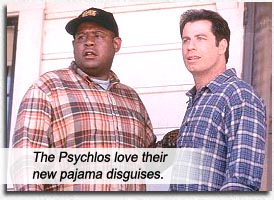 On his 37th birthday, Travolta sees lights in the sky – L. Ron Hubbard beaming down brain juice from his spaceship – and gains telekinesis and heightened learning capacity.

With his newfound powers, Travolta still can’t find an inane excuse to dance in this film – maybe it was those 15 inch disco heels coupled with earth’s high gravity?

Robert Duvall is the town doc, Brent Spiner beams down from Enterprise D to make a cameo and Kyra Sedgwick is the human female that Travolta tries to mate with to spawn mini-Psychlos. He somehow gets the idea that to impregnate her, he must buy her homemade chairs. I guess she gave him that idea by cutting his hair so sensuously.

Travolta finds that L. Ron giveth and L. Ron taketh away – as he was blessed with his powers of hyper-intelligence and the ability to absorb books like Spongebob Squarepants absorbs seawater – he was also cursed with aging too quickly.

He dies, having brought Scientology to Iowa, and rises to join Xenu in the mothership.

Didn’t The Muppets sing about this movie? It went like this: