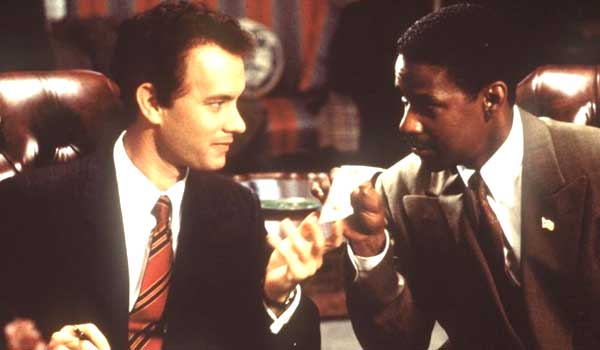 In PHILADELPHIA, Hanks is Andrew Beckett, a young gay lawyer (not pejoratively, as in “all lawyers are gay” – literally). His life is good; his law firm entrusts him with a primo case and brings him into the bigwig fold of Conservative Intolerant Redneck White Guys, led by gnarly Jason Robards.

Then they discover he has AIDS. Up to that point, Beckett’s sickness was manageable, and his sexual orientation and disease were closeted. The bigwigs fire Beckett on the pretense that his work is slipping but it is clearly due to their fear of his AIDS. Now that’s totally gay. Pejoratively.

And if a lawyer can’t smell a lawsuit in that, well…

Courtroom drama unfolds. Enter Smoove Bigot, in the form of Denzel Washington as Joe Miller, who takes Beckett’s case even though he is openly vocal about his revulsion to homosexuality. In a superb performance that only elevates his cool, Denzel walks that tightrope of anti-establishment and anti-hero, as he zealously represents Beckett in the very publicized unlawful firing case while simultaneously embarrassingly denying he is a shirtlifter to all and sundry, including his own drinking buddies and a taut-buttocked athlete who tries to pick him up in a store.

Though tragic and tear jerking, there is still levity in Hanks’s performance, as he retains that innocent, jaunty persona from BACHELOR PARTY (1984). After THE ‘BURBS (1989), JOE VERSUS THE VOLCANO (1990) and SLEEPLESS IN SEATTLE (1993), it was a stretch at the time to envision him in such a sober role. PHILADELPHIA would be the bridge that allowed us to embrace Hanks in APOLLO 13 (1995), SAVING PRIVATE RYAN (1998) and THE GREEN MILE (1999).

Written by Ron Nyswaner, directed by Jonathan Demme (THE SILENCE OF THE LAMBS, 1991), PHILADELPHIA came at the tail-end of the AIDS-awakened 1980s, and is arguably the first major shot across the bow tackling this taboo subject in entertainment media. This wasn’t a gay character to laugh at, this was a gay character to empathize with, as it is driven home that “gays are human too” with Beckett’s family, friends, his intelligence, work ethic, musical tastes and big gay loverboy, Antonio Banderas (at the tail-end of his Spanish acting career, soon to dynamite into U.S. cinema as El Mariachi).

Bruce Springsteen sings the theme song through a chloroform rag.