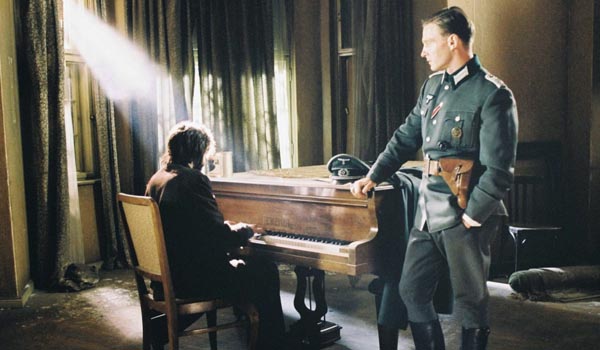 THE PIANIST follows Jewish concert pianist Wladyslaw Szpilman as he hides out from Nazis during the invasion of Poland. It’s not a story about heroes, rather, the story of a Polish man who avoided being one. And lived to play another day.

1939. Wladyslaw “Wladek” Szpilman (Adrien Brody), whom many contend was “the most accomplished pianist in Poland, if not all of Europe” during the 1930s, is thrust into WWII fingers first when a German bomb blows up the radio station where he is broadcasting a piano performance.

When he arrives home, his large family, who were just desperately packing to flee, hears Britain on the radio declaring war on Germany, and promising Poland she “is not alone.” However, like every political promise made in the history of politics, it will mean less than the airwaves it was broadcast on. Even whilst they enjoy dinner and drinks to celebrate the end of a war which is actually just beginning, German troops are goose-stepping into their town. There is an authenticity to this ambivalence that is lacking in many war movies: In hindsight, we know what a scourge Hitler’s regime was, but in those more innocent times, when only one “World War” had ravaged humanity, Poland (and the world at large) did not take Hitler’s extremist policies of relocation and extermination seriously.

We see the slow undermining of Poland’s freedoms: “Jews Only” cafés, Star of David armbands forced on Jews to identify them like cattle, laws prohibiting Jews to sit on park benches… it gets real when Wladek’s father is stopped by Nazis and beaten for not bowing to them in the street.

During the evacuation of the bombed radio station, Wladek met a blonde fan enamored with his playing, Dorota (Emilia Fox). While the station crumbled around him, Wladek’s mind was not on German raids but on raiding panty. Even during a bombing – men be pigs! He took Dorota on a date, where he lamented, “What’s the use of fighting back?” – which, we presume, caused him to miss out on some fine blond tail that night…

Now, while Wladek drudges alongside a cart with his family, he sees Dorota by the roadside, watching the exodus. Oh, Humiliation, thy snide mistress! And Dorota, tears edging her eyes in disbelief, says what must have been in everyone’s minds as it was happening back then, “It’s too absurd.” 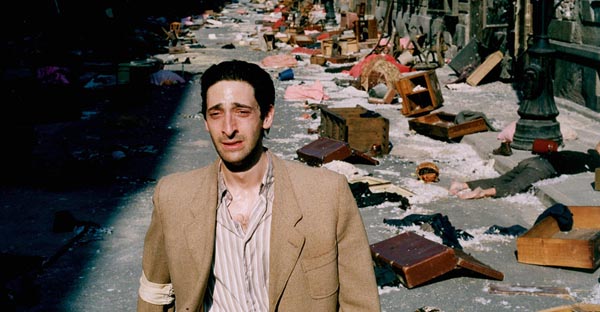 You should see this place on a Friday!

From this point THE PIANIST starts resembling that other great WWII drama, SCHINDLER’S LIST, in its depiction of German soldiers’ brutality and sadism. Scenes of unthinkable misery: a man in a wheelchair thrown off a balcony; a father dead in the street, his head cradled by his crying son; a woman asks a soldier, “Where are you taking us?” – a nonchalant bullet to the head. Like SCHINDLER, the violence is sudden, glaring and shocking; the misery and poverty of the downtrodden Jews almost too much for us to bear even as viewers.

A chance separation; a critical turning point – a friend from the Jewish Ghetto police recognizes Wladek and pulls him deliberately from the line, while his family are being herded into windowless cattle cars. To their knowledge, they were being taken “somewhere” as an enslaved labor force – at the least, they were a commodity, none could conceive of the trip being a journey to their deaths. There was truly no rational reason to simply wipe out people. But there was no reason or logic to the fanatic racism of the Nazis (which they have carried down to their most recent capos like Dumbo Donald, Closet Mike Pence, Ku Jeff Sessions and the whole foreign-bought enslaved American republiKKKan administration).

In a labor camp, Wladek meets an old friend, Marjorek (Daniel Caltagirone, the Andy Garcia of Poland), who helps Wladek escape into the Jewish Underground. And so begins the hiding. From deserted apartments to bombed districts, forever moving and being aided by free, rich Jews sympathetic to the cause. At one point Wladek encamps in the lion’s den – across the road from German Police. With a piano in the room, which he couldn’t play, because the apartment he was hiding in was regarded as empty! Only a musician will know the pain. 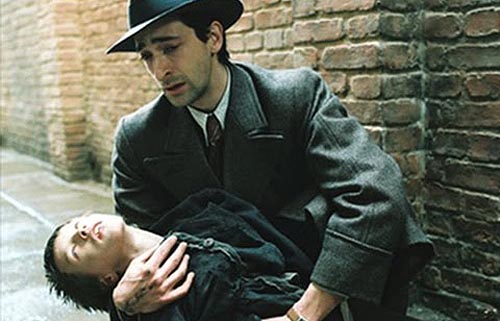 There are two themes at play in THE PIANIST – the first message is simply about the inartful, ungodly luck that separated life from death during the war. In his flight from the Nazis, Wladek would encounter so many chances and coincidences and near-death experiences that the overarching message of the movie is not one of heroism or canniness, but of randomness. Though we may regard Wladek as intrinsically worthy of saving (because he is an artist? the star? a sexyboy?), he did not do anything heroic in his quest to survive; it was not as a “reward” for saving a school of children from bombs, or trying to sacrifice himself for another, no, his existence was what most would regard as “cowardly” – fleeing from hideout to hideout, noiseless, like a mouse, the merest hint of discovery causing him not to take up arms against his aggressors but to flee again and again. He did this until his country was liberated by other people, negating his need to flee. At one point, Wladek helps a young boy crawl under a wall, but the boy dies in his arms – this is not so much a heroic act as another demonstration of randomness, as when Wladek was pulled from the line and saved unintentionally from death.

This randomness would have a part in the second theme of THE PIANIST, which illustrates the true sense of being humane. Wladek is discovered by Wehrmacht officer Wilm Hosenfeld (Thomas Kretschmann – no matter how Aryan this guy looks, he’ll always bring our tears to the surface in his touching roles!). Coincidentally looking like Liam Neeson (cough-Schindler!), Hosenfeld is a music lover, and after discovering Wladek is a pianist, starts supplying him with food! In a heart-rending turnaround, Hosenfeld finds himself a Soviet prisoner when the war is over, and beseeches a passing Polish musician, “Do you know Szpilman? I helped him while he was in hiding! Tell him I’m here!” But Hosenfeld would die an unheralded death in that camp in 1952, unapplauded, unforgiven. Yet wasn’t his fate a treatise on Christianity in its purest form? How God entreats Christians not to seek plaudits or reward for their good deeds, nor to shout them from the rooftops, but to perform them in earnest, away from prying eyes? Truly, this is Hosenfeld, who returned a creature of art to the world. And when he asked for reward (in the film at least), none was given. Yet, he never looks regretful of his humane actions…

The Pianist and The Captain – Wladyslaw Szpilman and Wilm Hosenfeld.

BEST DIRECTOR: Ronald Harwood screenplays from Szpilman’s book, The Pianist: The Extraordinary True Story Of One Man’s Survival In Warsaw, 1939-1945 (Picador, 2000), a story which resonated with director Roman Polanski, who was also a fugitive from Hitler’s regime at a young age. There were many who felt Polanski redeemed himself of his statutory rape crimes with his creation of this touching film– (oooh, don’t say ‘touching’). THE PIANIST also won BAFTAs (including Best Film 2003), and a host of other awards.

BEST ACTOR: There were the “big” aspects of Adrien Brody’s Method: he dropped down to 130 pounds, moved to Europe, got rid of his car and phone, to experience isolation and loss, and wasn’t sure he would make it through the experience entirely sane. Then there were the little things: after he realizes his whole family has been taken from him in one fell swoop, Wladek meets a fellow fugitive and is in such a state of despair he cannot speak coherently (we think he’s going to give the customary exposition about the train taking the Jews to the ovens, for historical context blah blah, but Brody brilliantly, gutturally tries to squeeze out a few words and says nothing; or the amazing visual when Wladek speaks to Germans, where he adopts a cowed manner, and we are taken aback when we see Brody (the obvious star) murmuring with head bowed, until we recall this was the manner of all Jews toward occupying Nazis; or Brody’s pretty convincing piano miming, most of which is Chopin – challenging stuff, even to mime. (Actual closeups show the hands of pianist Janusz Olejniczak – which may also be the last remaining letters in any given Scrabble game.) And one thing Brody didn’t need to work on – that honker! Whatever nationality/religion Adrien Brody is, that nose of his is strictly Jewish. Adrien won the Oscar for Best Actor. His nose won at Cannes.

The one thing that gives us pause and robs the film of a little authenticity is – ironically – the sound of the piano in the bombed house where Wladek is discovered by Hosenfeld. It is beautiful, magnificent, in perfect tune and conditioning, not one key sticking, not one key broken, not one string even slightly flat, its feel and touch perfect. In Holocaust Poland. I’ve played pianos in modern music studios that are in worse condition than this instrument in Holocaust Poland.

Closing titles: “Wladyslaw Szpilman continued to live in Warsaw until his death on 6th July 2000. He was 88 years old.”

His nose continues to tour with the Polish National Radio Symphony Orchestra.