The Fast Track to Brotherly J. 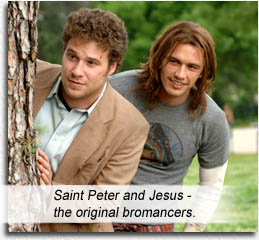 Welcome to the new edge of comedy.

There’s something very brave about Judd Apatow/Seth Rogen films – how they eschew Hollywood protocol and make their leading men (their male leads) each other’s love interest! Not gay. Love, you prurient, fundamentalist bigots. Two men who can swear eternal love for each other and not come off homo. But bromo.

Is PINEAPPLE EXPRESS just another “bromance”: two immature boy-stoners who can’t forge a “real” relationship with a female, so run around holding hands, on the lam from drug dealers? Well, the “bromosexual” tag (although hilarious) doesn’t do this film justice; like many Apatow films, EXPRESS takes the brave stance of relegating what is considered the driving force in most movies – female approbation – to the sidelines.

Amber Heard plays Seth Rogen’s nominal girlfriend, a smokin’ female “lead,” but when she disappears during the second act and we never hear from her again – we don’t miss her!

Seth Rogen is stoner action hero, Dale, with James Franco as Saul, his airheaded dealer. Dale is process serving one day, smoking a Pineapple Express (which he just bought from Saul, who describes it as “almost a shame to smoke it. It’s like killing a unicorn”), when he witnesses a murder. Freaked out, Dale loses the joint in front of the murderer’s house and lams it back to Saul’s place. The murderer (Gary Cole, in cahoots with Rosie Perez, who seems kinda old to be here) happens to know Pineapple Express and who deals it – Plot Convenience Community Theater, here we come! So begins the pursuit of Dale and Saul by the murderer’s henchman, Kevin Corrigan and Craig Robinson.

They are joined by an Eastern-philosophizing mindless loser named Red (Danny “Thug life!” McBride, who may actually be the first to coin “bromosexual” in the film itself).

Another feature of Apatow films is their simple dialog, which avoids the tired comedic punchliner mode and turns up at our door dressed in street cred and drinking a beer, burping in our faces: Saul exclaims at one point, “Holy cock!”; and as he is dragged towards a manhole, “What’s down there? A fucking rancor?” (RETURN OF THE JEDI, of course); when Dale is confronted by his girlfriend’s screaming father (Ed Begley Jr.), “You assholes do exactly as I say, or I will take you outside and fuck you in the street!” he pleads, “No! Don’t fuck us anywhere!”; Dale describes reincarnation to Red, “If you’re an asshole, you’re gonna come back as a cockroach or a worm or a fuckin’ anal bead, okay? If you’re a man and you act heroic, you’ll come back as an eagle; you’ll come back as a dragon; you’ll come back as Jude Law, okay? Which would you rather be?” to which Red replies, “Maybe the anal bead, depending on who it belongs to.” There’s much more – but that’s why the movie is made…Rogen does well to hold his own against the “serious actor,” Franco, and Franco holds his own as a comedy force against the improv gung-ho of Rogen.

I think that’s why Apatow is so successful with his formula – because audiences have had enough of the “Women Be Everything” mode of storytelling. However, pondering Apatow’s formula, we realize it isn’t so new and unique – just updated.

Remember Laurel and Hardy? Or Martin and Lewis? Two-man teams (or should that be two “Man-Teams”?) where it didn’t matter if they got the girls or not – their arcs involved the dissolution of their partnership and subsequent reconciliation. Women were simply props to acquire, not the central point of existence; the comedy was never centered on how pussy-whipped the men could possibly make themselves before movie’s end…

And what about the New Bromantics?: Vince Vaughn and Jon Favreau, Owen Wilson and Ben Stiller, Chris Tucker and Jackie Chan…