“Banging your heart against some mad bugger’s wall…”

If you wanna find out what’s behind these cold eyes
You just have to claw your way through this disguise…
— In The Flesh, Pink Floyd. 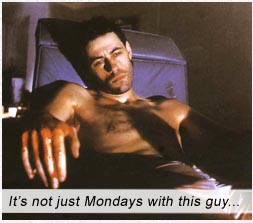 A visual cataclysm of a musical monolith. PINK FLOYD: THE WALL is the movie of the album that hit us right between the teens, embedded in the darkest crouch of our gargoyle brains.

As one of the greatest – if not THE greatest – Pink Floyd albums provides the soundtrack, we follow little Pink from his youth as a fatherless 5-year-old, hungering for human contact when his mother leaves him to the loneliness of the schoolyard, holding the hand of any strange parent that happens by. Like The Who’s Tommy, whose father was lost to a World War, so too was Pink’s, described in the tear-welling epic, When the Tigers Broke Free (a new song written for the film, not on the album); through grade school where his noisome teacher (Alex McEvoy) scolds him publicly for writing poetry (and reads out the lyrics to Money); onto his eventual consecration as a disillusioned rock star (Bob Geldof, playing the adult Pink with fascist brio), addled by painkillers, uppers, downers, dumb bitches with smooth ta-tas and delusions of Messianic grandeur. 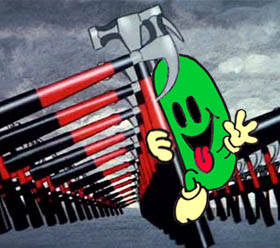 “The Wall” alluded to passim is the psychological shield that Pink constructs from youth to guard himself from the pain of love, life and death. That’s about everything, innit? That’s why we all have Walls. That’s why we were hit between the shoulder blades like a target was painted there, by the genius of Roger Waters.

Of course, the single, Another Brick in The Wall (Part II) dominates the sensibilities – it was so huge, I got sick of hearing it at the time of its release. Only within the context of its surrounding masterworks can I tolerate this song.

It is serendipitous that Waters’ voice sounds like it might be Geldof’s. (At this point, Geldof was still the lead vocalist for The Boomtown Rats, not the Live Aid Saint he would transmorph into very shortly.) Geldof re-recorded his own voice for In The Flesh? and In The Flesh, and Parker used real neo-Nazis for the crowd scenes. I’d wager none of them realized the movie was ANTI-fascist and a sarcastic stab to their religion.

The grandest irony that Roger Waters worked into this masterpiece is the fact that if constructing The Wall to hide from society is a handicap, then tearing down the Wall should be the solution to an open, rewarding life – “there must have been a door there in the wall for when I came in” (The Trial). Instead, by existing behind that Wall for so long, tearing it down actually becomes a punishment, an unwanted exposure! The Worm Judge, infuriated with Pink “caught red-handed showing feelings of an almost human nature” sentences him not to imprisonment – but to “tear down the Wall”! O Roger, thou mistress of pithy parody!

I have become Comfortably Numb.

imdb
Word Count: 630     No. 545
PINK FLOYD
Music from the movie
THE WALL
When The Tigers Broke Free

Mother
One of My Turns
Comfortably Numb