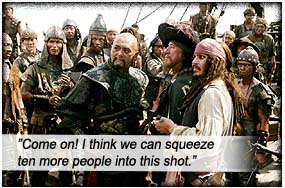 Director Gore Verbinski puts so much effort into this summer blockbuster that it boggles the rational part of the brain – look at that cinematography, look at that set dressing, look at that costuming and attention to detail on every starboard bow and odd bodkin and shivered timber. But pull back and the fault lines appear quickly: once again, Orlando Bloom and Keira Knightley play star-crossed lovers; once again Johnny Depp and Geoffrey Rush play ham and cheese with lots of dressing, once again Hans Zimmer’s soundtrack beats you to a bloody pulp – in PIRATES 2 (2006) these elements walked the edge of the tolerable plank, but mish-mash them amongst a wretchedly convoluted storyline and unnecessary, eye-straining, computer-graphicking spectacle and what started as a good idea back in 2003’s PIRATES OF THE CARIBBEAN: CURSE OF THE BLACK PEARL is now an epileptic nightmare.

Written by Ted Elliott and Terry Rossio, AT WORLD’S END opens with the British government repressing civil liberties in the quest to eradicate piracy, not realizing that they become as villainous as the factions they are trying to overcome in the process – quashing the right to assemble, denying the right to habeas corpus – yes, exactly like modern America…

We never really “meet” the characters; more like “catch up” with them in the middle of a fine mess – why exposit when there’s so much action to get to? From the press junkets, we learn that Barbossa (Geoffrey Rush) can only repel the British forces by convening nine Pirate Lords, one of them being Jack Sparrow, who is dead, which presents a problem.

Verbinski has been taking film-making lessons from George Lucas. And his film fails in exactly the same ways that Lucas’s do.

Firstly, there are no rules that this Caribbean universe adheres to: people die but can’t seem to stay dead; “dead souls” abandoned by Davy Jones float by in the water, then are suddenly floating by on little touristy boats (in or out, people – make up your minds!); Davy Jones himself (Bill Nighy, once again with a ‘pus on his face) suddenly gains the ability to walk through walls; Chow Yun-Fat is Pirate Lord Sao Feng – until he bequeaths his title to Elizabeth (it’s that easy to become a Pirate Lord? No wonder Jack is one).

And there is nothing at stake if you swordfight someone who can’t be killed with a sword. How stupid must the British be to threaten someone with death if they’re already dead? But being dead, what are they doing hanging around on OUR plane of existence? Who knew the dead still harbored ambitions to live like the living throughout their death?

And I guess marriage performed by a dead sea captain, mouthing unintelligible vows whilst slicing out undead people’s spleens is recognized as legal.

no more sense of wonder…

Making that age-old movie marketing mistake, Verbinski identifies his “selling point” (any layperson could tell you it is Johnny Depp as madly fey Jack Sparrow) and follows the fallacious market research on summer blockbuster sequels that informs him to then glut the screen with his selling point. After waiting twenty minutes for Depp’s Sparrow, suddenly we’re wishing he would Go Away, as we find him in Davy Jones’ Locker (i.e. Death – which is apparently an actual “place” rather than a condition), talking to himself – literally. Whereas in CURSE OF THE BLACK PEARL Depp exploded out of left field with the half-drunk, half-transvestite, Keith Richards-inspired Jack Sparrow, now the joke has worn thin. And putting hundreds of him onscreen – each one feyer than the last – only makes one person happy: George (More Is Better) Lucas.

A rock turns into a CG crab. But why stop at one – when you can have a million? Why should the British armada stop at a hundred ships when you can populate the horizon with a thousand (which all might as well be a matte painting, for all the sitting there and doing nothing that they do)? A five-foot woman grows into a fifty-foot woman – for no reason, other than to explode into a million crabs (yes, “She’s got crabs” is kinda obvious – except to the screenwriters); and why stop at “inspired by” Keith Richards – when you can HAVE Keith Richards?! Keef cameos for twelve eyeblinks as Jack’s wayward pirate pater, the irony being that Richards really IS a zombie and wears enough makeup on Stones Tours to make him look alive, yet here, with his long black tresses and prostitute mascara, he actually looks alive – and he’s MEANT to be a zombie.

The PIRATES franchise started as a filthy romance between a statesman’s daughter, Elizabeth Swann (Keira Knightley, still flatter than an ironed pancake with a face that never gets dirty, hardened features so enamel-coated you could cut bread on them), and blacksmith Will Turner (Orlando Bloom), while a soldier, Norrington (Jack Davenport), wooed her with “proper” British etiquette.

Then came Jack. And though the film-makers held a semblance of love quadrangle through PIRATES 2, here there is just too much bluster for the flimsy chemistry to hold. Elizabeth’s twat aches for Jack; Will is her obsolete brother and Norrington somehow pulls off the only “romantic” parlay of the film, a scant poignant moment where two people actually act like they have human feelings for each other.

The unmitigated stupidity of Will and Elizabeth’s “marriage scene whilst dueling” holds not one shred of emotion. And Will becomes the New Davy Jones, who must stay seabound and only come ashore once every ten years to spend filthy time with Elizabeth… but hang on! – Why can he only conjugate with her on land? Who made the rule that there’s no screwing onboard The Flying Dutchman? So is it because of her marriage vows that we are meant to believe Elizabeth will be faithful to Will over TEN YEARS of celibacy? Let’s see – she’s about 24 now, she could have as many as four filthy meetings with him before she also dies and then gets resurrected for no reason. That’s about the modern frequency for marriage anyway, isn’t it? And it’s quite plausible for her to remain celibate for ten year stretches hanging around pirates.

Once or twice, when Depp effects that effete run, it’s funny. Once or twice. With a sinking feeling, we ask ourselves what makes this movie so bad – but Verbinski just keeps throwing money at the problem. At one point, I wanted to succumb to my inner child and just write, “This movie sucks!”

Yes, we know we’re meant to take it all like a ripping yarn, but there’s just too much yarn and not enough ripping; how many times can people double-cross each other before we stop caring who’s on whose side and whether Orlando Bloom will ever get to touch Keira Knightley there? It’s not “fun” anymore – the rascally diversion of the PIRATES series has turned into a must-earn overblown bombast of money-raking white noise consumerism.

And that, swashbucklers, is why AT WORLD’S END fails.