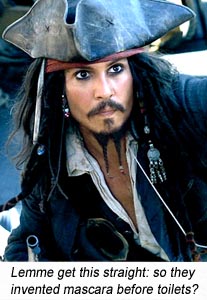 Johnny Depp as some kind of transvestite, in a swinging, swordfighting fey-quest over the high seas of The Caribbean, with Orlando Bloom as his blacksmith girlfriend, and Geoffrey Rush as a grumpy old man in a Halloween pirate costume. Keira Knightley’s square man-jaw causes untold distraction; Jonathan Pryce gads about in a wig slightly smaller than Dee Snider’s hair during the Stay Hungry tour, and Jack Davenport tries to take it all seriously, for which I’m sure everyone laughed at him behind his back.

PIRATES OF THE CARIBBEAN: THE CURSE OF THE BLACK PEARL is as entertaining as it is ambitious, as rollicking as it is ridiculous, as boyish-action-movie as it is gender-bendingly-ambiguous.

Supposedly based on the boring Disneyland boat ride of the same name – that doesn’t have nearly this much gender bending – if anyone ever has this much fun on that dank, irritating boat ride, I’ll eat my triangular hat. Somehow, Disney’s accursed homogenizing hand could not stultify this film’s pure adrenalin bumrush.

Depp is Captain Jack Sparrow, who rockets out of left field with his mascara on overdrive and his personality on sideways; he alone imbues this movie with its unique charm. For some reason, his aggressive effeteness lends an authenticity to the swashbuckling that none of the other “Halloween pirate” performances can. His drunken, insouciant braggadocio drives the film like a 1st rate Ship-of-the-line, beating to windward, guns blazing (and I do mean ‘blazing’).

Matter of fact, there were secret talks held with the Oxford English Dictionary on whether to replace Anthony Hopkins’s picture with Depp’s, next to the meaning of the word “fey.”

Filmed in the Caribbean (St. Vincent and the Windward Islands of the Grenadines), PIRATES somehow avoids looking anything like the Caribbean. Must be that homogenizing Disney touch.

Geoffrey Rush is aye-me-hearties Captain Barbossa who stole Sparrow’s ship, the Black Pearl, which Sparrow spends the whole movie trying to steal back.

Keira Knightley is Elizabeth Swann, daughter to the Governor (Jonathan Pryce), betrothed to a stoic British Commodore (Jack Davenport), but in love with Jack’s girlfriend, Will Turner (Orlando Bloom).

Director Gore Verbinski frames Knightley’s opening shot from an angle that makes her look busty, rather than her sad reality of being flatter than the Earth Before Columbus.

Her pancake ironing board pecs are probably the reason that with all the kidnapping she undergoes by pirates, not one of them thinks to drag her into the hold and rape her – they must think she’s a skinny boy. And since none of them are Catholic priests, she’s not considered sexual property.

It looks very eerie cinematically, but with all those holes in the sails, how does the Black Pearl ever sail? Oh, that’s right, she’s supernatural. Then why does she “sail” at all? Why engage in a “chase” to “catch up” to the Commodore’s ship? Why not just appear alongside in one fell swoop?

For once, the work of four writers looks justified (Ted Elliott, Terry Rossio, Stuart Beattie, Jay Wolpert) with the wealth of ideas onscreen. Bold, brash, criminal adventure, involving Aztec blood amulets, hidden treasure, lots of yo-ho-ho barrels of rum, double-crosses and triple-crosses (Sparrow: “Me? I’m dishonest. And a dishonest man you can always trust to be dishonest. Honestly”) and fencing the likes of which we haven’t seen since Basil Rathbone and Errol Flynn (which does get tiresome when everyone is fencing for no reason, i.e. if you can’t kill each other by fencing – due to being supernatural beings – why bother?)

Bouncy-bouncy music by Klaus Badelt (with music editing and production by Hans Zimmer), moving us like the shifting deck of a schooner: coy, ominous, frolicsome, and rope-swinging-across-chasms epic, transporting us out into the salty breeze and briny seas – or at least to a water tank in San Francisco.

I’m sure the PIRATES movie has made the Disney ride infinitely more popular – though no less boring.