Captain Jack will get you high tonight…

PIRATES OF THE CARIBBEAN: DEAD MAN’S CHEST is pure ham and cheese. Lots of sauce. Lots of dressing. Hold the onions. 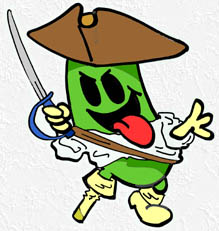 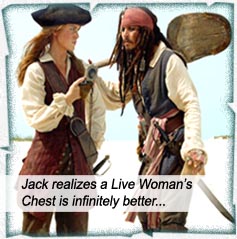 Director Gore Verbinski‘s sequel to his PIRATES OF THE CARIBBEAN: THE CURSE OF THE BLACK PEARL (2003) is a spectacle to behold, a hedonistic bombast of swashbuckling high-sea hijinks, sun-seared tropical environs, intricately-designed ocean-creature monsters and eyeliner enough to embarrass a prostitute.

Speaking of prostitutes, Johnny Depp, renowned for not bowing to Hollywood ethos, bows to Hollywood ethos and returns as Captain Jack Sparrow, an amalgam of Dudley Moore’s ARTHUR, a stoned transvestite and some kind of idiot savant. Orlando Bloom, whose diverse roles involve sword fighting, fighting with swords and sword fighting, is again the amorous Will Turner, whose gay blade is once more victim to coitus interruptus with his square-jawed man-bride of the support-bra bosoms, Elizabeth Swann (Keira Knightley).

There’s treachery afoot in Olde England, and Turner is blackmailed into retrieving Jack Sparrow’s magic compass in return for his jailed bride-to-be.

Using the compass, Jack seeks the hidden Key and buried Chest of ghoulish scourge of the seas, Davy Jones (whose second mistake – after letting an octopus camp on his face – was hiding his beating heart in the chest and burying it on land; land which the screenwriter forbids him from stepping on but once every ten years).

After the plodding first hour – riddled with slapstick only a thirteen-year-old could possibly find marginally original, let alone nominally amusing – the film at last finds its sea legs (accompanied by a highly intrusive Hans Zimmer score) in the race between Sparrow, Davy Jones, Turner and Norrington (Jack Davenport) to locate the Dead Man’s Chest.

Elizabeth spends some disguised time as a boy-sailor onboard an all-male ship – the fact that the crew cannot peg her as female, or the fact that any boy that smooth-faced and round-buttocked is not raped continuously reminds us woefully of Disney’s role as production company.

Sailing an ocean eternally chlorine blue, Davy Jones (played ostentatiously by Bill Nighy, relishing the ‘pus on his face) enslaves Will Turner, through Jack’s treachery. It is while Will is onboard Davy’s Flying Dutchman that the movie offers us what meager character poignancy a summer blockbuster can afford to waste precious minutes on, when Will reunites with his father, a barnacle-encrusted Bootstrap Bill (Stellan Skarsgård), who sacrifices his eternal soul for Will’s freedom.

As Will steals the Key from the sleeping Davy Jones (whose tentacled face is quite the organist), we ask ourselves, “Would a supernatural creature really need to sleep? What energy resources is he replenishing?”

The same conundrum faced by people in zombie movies exists here: how do you “kill” something which is already dead? When the running and shouting and loud music starts again, Davy Jones’s crew – all ostensibly zombies, creatively visualized as nightmarish deformations of recognizable sea creatures – are scalloped and diced by everyone within sushi range.

Until the Kraken arrives. Summoned by Davy Jones via a hydrosonic boom, the giant octopoid (which lives on the ocean floor, yet somehow acclimates to our surface air pressure quite comfortably) minces Jack Sparrow’s ship – The Black Pearl – with as much zest as Jack Sparrow minces, and is rewarded with some prime ham in the form of Captain Jack himself.

Though Depp is undoubtedly this movie’s pulling power, Orlando Bloom endows his role with as much leading man bravado as Depp endows his with effeteness, at one point, even pulling the old Errol Flynn maneuver of sliding down a sail while using his knife as a brake. Seems like the wrong thing to do, as Keira’s Elizabeth has skipped from Norrington to Turner and eventually pants after Sparrow like a dog in heat – out with the fey, in with the feyer.

She can afford to. With her perfect features, Keira Knightley mocks every man who will never sweep their palms over her support-bra’d bosoms; whilst Orlando mocks those same heterosexual men, who find him disturbingly attractive. As Depp mocks every she-male who can only yearn for Jack Sparrow’s level of Freddie Mercury camp and waterproof mascara.

Don’t know why DEAD MAN’S CHEST is considered a cliffhanger – the crew quite clearly see Jack Sparrow swash his buckle into the Freudian-vaginal maw of the Kraken, while the Black Pearl is splintered into smithereens. Declaring they will “do anything” to get Jack back (and throwing down a ham-cameo in the eleventh hour) can achieve absolutely nothing if Jack is already abiding on the ocean floor as Kraken scat.

It’s all very silly really – and like heroin, it will kill you if you have too much – and if it weren’t for the fact that the lavish, overwrought production resonates with a Jack Sparrow-like insouciance, it would be entirely unbearable.