Yo ho ho and a bottle of Rum Diary.

Here we are now! Entertain us!
— Nirvana, “Smells Like Teen Spirit.”

So I’m sitting there wondering how another PIRATES movie could have the audacity to rear its skull and crossbones, let alone Johnny Depp reprising his transvestite role yet again with any shred of interest from either him or the moviegoing public. Aren’t three PIRATES movies enough to keep our buckles swashed and our timbers shivered? 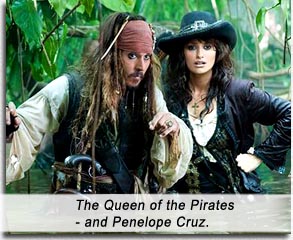 I imagined PIRATES OF THE CARIBBEAN: ON STRANGER TIDES would be a lowdown dirty shame, with nowhere to go on the story, nowhere to take the characters and no one to watch it go nowhere, but I was wrong – it’s actually quite mediocre!

Ironic that the story in this aged and worn PIRATES is – the quest for the fountain of youth.

Captain Jack Sparrow (Johnny Depp) is pulled into a quest inadvertently by an ex-flame, Angelica (Penelope Cruz, doing her Salma Hayek with B’s instead of D’s, push-up bra working overtime to keep those puppies bouncy-bouncy). Constant nemesis and simultaneous unwilling ally to Jack, crusty Captain Barbossa (Geoffrey Rush, whose mode of acting here has devolved to scrunching up his eyes when he starts a line and then opening them wide mid-delivery) is commissioned by the British government (Richard Griffiths, trying to out-overact Geoffrey Rush) to go on the same quest – to locate the mystical waters of the fountain of youth.

Jack is advised by his father (Keith Richards in a three-minute cameo of pure zombie) to embark on the quest. Depp has always maintained that Richards was the inspiration behind Jack Sparrow, but maybe a subconscious inspiration is Depp’s admitted idolizing of Hunter S. Thompson, as we pick that influence too in Sparrow’s inebriated mumbling. So Jack/Hunter/Keith ends up onboard a dark ship captained by the legendary Blackbeard (gravel-throated Ian McShane, perfectly cast, death-blackened eyes and glorious facial hair worthy of a balrog) and proceeds doing what Jack/Hunter/Keith does best – get himself into drunken political rock and roll trouble…

Jack’s first mate Gibbs (Kevin McNally) is once again along for the ride, as is Stephen Graham (SNATCH) as a swab, Sam Claflin as a sexy priest, and Astrid Bergès-Frisbey as an innocent mermaid. (But can anyone who goes around topless all day really be considered innocent? Dont worry, parents: all the mermaids suffer Disney-toplessness, which means their hair is their bra. Sorry, 17-year-old boys, frustrating but true.) Blackbeard captures this mermaid, whom the priest fawns over as if she was a 12-year-old altar boy, even though she has no lady parts that might fit his holy man-parts; although when she falls out of the water onto dry land, she inexplicably grows feet and – we presume – lady parts. (Who made up those rules? Good thing we all saw SPLASH.)

This PIRATES is missing many of the main characters that created the dynamic in the previous movies – gone are those two comic relief pirate swabs (featuring Mackenzie Crook and his eyeball), gone are the British stiff-lips Jack Davenport and Jonathan Pryce, as is the octopus-head of Bill Nighy, gone is the tragic crustiness of Stellan Skarsgård, and the imperious ineffectualness of Tom Hollander (after seeing him in the brilliant bollocking of IN THE LOOP, I was really hoping he would be here); gone is Orlando Bloom and his square-jawed manliness and gone is Keira Knightley and her square-jawed manliness.

And gone is the director of those movies, Gore Verbinski. There is slightly less cheekiness in the tone of Rob Marshall’s direction (from a script by PIRATES veterans Ted Elliott and Terry Rossio), yet he captures the action and lavishness of the previous productions. Yet all that lavishness lands with a thud when events just happen arbitrarily and characters turn up here and there with no logical purposes or throughlines.

While Blackbeard seems intent on his goal, Barbossa is intent on revenge on Blackbeard for stealing his precious Black Pearl. Jack seems caught somewhere in between, like the opportunist he is, and is involved in myriad cartoonish adventures on both sides, still running like a girl, lisping like a drunk and wearing mascara like a prostitute. He doesn’t seem to have any motivation, except maybe touching Penelope Cruz’s eternally forward-thrust push-up bra.

I guess that’s motivation enough for a tranny pirate.