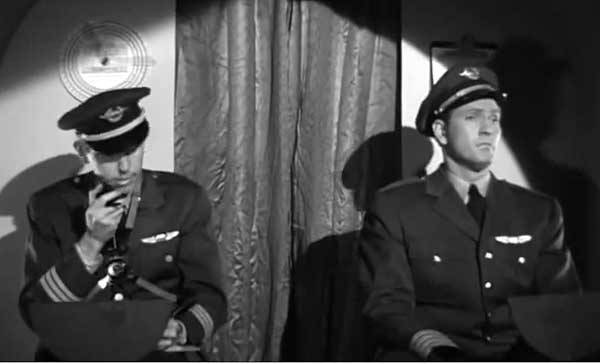 Hubcaps terrorize process shots of Los Angeles, while aliens try to save humanity from itself by turning dead people into bad actors.

PLAN 9 FROM OUTER SPACE is filmwanker Ed Wood’s love letter to science fiction plagiarism, its premise stolen directly from 1951’s THE DAY THE EARTH STOOD STILL – that of aliens warning Earth to stop advancing its weapons technology or the universe would be threatened; whereas the aliens in EARTH STOOD STILL cut all power on Earth as a show of their superiority, the aliens in PLAN 9 raise humans from the dead to illustrate their sincerity.

No one said it was a smart plan…

How are zombies connected to getting your message across that humans are on their way to discovering a bomb to destroy the universe, and should therefore stop developing it? Let the alien Leader outline the devious-yet-noble Plan 9, in a posh British accent: “Since they will not listen or respect our existence, they cannot help but believe our powers when they see their own dead walking around again. Their own dead will be used to make them accept our existence and believe in that fact.” I guess that makes sense.

Ed Wood, posthumously regarded as the Worst Director of All time, writes, directs and produces PLAN 9, which makes him responsible for the inexplicable continuity (in the same scene, one shot is day, one is night, one is day-for-night), editing (even cutting between two actors speaking to each other makes them look like they’re in separate movies), special effects (like a child’s idea of flying saucers on strings, over a child’s idea of an outer space backdrop), blocking (apparently, the prescribed method of dealing with a supernatural being attacking you is to stand there and watch it approach; maybe scream, maybe shoot, but don’t run or anything); and of course, Wood fills his film with dialogue as good as the above excerpt, and the deadest acting this side of a real zombie apocalypse.

PLAN 9 cannot do one thing right, evidenced by the sheer ineptitude on all fronts in the very first scene (after the paranoid introduction narration from a “psychic” star of the age, The Amazing Criswell): two pilots in a cockpit devoid of everything except steering wheels, radio the tower at Burbank airport, requesting landing instructions. When no one answers (because sometimes no one answers a plane requesting landing coordinates), one pilot says jokingly, “I wouldn’t be surprised if he was asleep at this time of the morning” (because air traffic controllers are known to sleep at their desks while landing planes). A bright light suddenly fills the cockpit (or should I say, ‘the studio set dressed like a cockpit,’ or should I say, ‘the studio set NOT dressed like a cockpit’?), the pilots blandly identifying it as “nothing from this world” and call, “Mayday! Mayday!” while they are still flying under total control of their craft. Firstly, “Mayday” is used for life-threatening situations, not because you piddled your pants at a bright light, and secondly, it should be called in groups of three: “Mayday! Mayday! Mayday!” Okay, now let’s do every single scene as ineptly as this one.

Big blond square-jawed Gregory Walcott (you know him as the dumb cop with his black partner who tailed Eastwood in EVERY WHICH WAY BUT LOOSE) is the pilot hero; he is tasked by the military to help them stand there and do nothing as a Dracula guy approaches. (Hey, I didn’t write this shit.)

Walcott has a passionless pointy-bra wife who professes to being lonely in bed without him, while looking like she is repulsed by the touch of men.

Tor Johnson actually has a few opening lines as a detective, before being transformed into a mute, gape-mouthed zombie. It’s like the effort of those few lines was too much for him and he had to revert back to his safe space. (Tor’s actual policeman son provided all the cop cars and uniforms.) Tor ends up doing duty as Woman Carrier – you see, every 1950’s B-movie had to have a shot of an alien or monster carrying a usually-unconscious, usually-scantily-clad female draped across their arms. No reason or utility, just complying with 1950’s film poster protocol. (Thankfully, this sexist trope was abandoned by the late 80s, as it gave men bad backs.)

Lyle Talbot cameos as a doughy general. In the decade since his appearance as Commissioner Gordon in BATMAN AND ROBIN (1949), Talbot had raked up 172 credits in other films and TV shows. We can safely say he is the only real actor on set – all that experience wasn’t wasted. This guy would literally do anything, so his familiarity lent street cred to marquees and posters, even though he was in it for only a hot second – after all, he had three more movies to do before lunchtime.

And Bela Lugosi, as some kind of undead vampire. The original Vampira (Maila Nurmi) is his dead wife brought to life, and dressing as she normally does – like a vampire. Reason? None. Having actually died before this film could be completed, Bela’s irrelevant skulking scenes (along with a body-double who covered his face with his cloak) were inserted ineptly by Wood as tribute? exploitation? filler? That’s the beauty of having editing so bad: we can’t even tell that those scenes were shot for two other Ed Wood movies in the works, abandoned with Bela’s death, and thus square-pegged into this round hole. And it doesn’t stop Wood from shamelessly advertising, “The screen’s greatest shock star! Bela Lugosi is back! To haunt the Earth…”

Filled with interminable walking scenes through cemeteries, and stilted dialogue that makes meeting your girlfriend’s father sound comfortable, PLAN 9 is piled high with zero-talent actors we’ve seen in those other Wood films on MST3K – BRIDE OF THE MONSTER and THE SINISTER URGE. (Michael J. Nelson of MST3K does the Commentary on the colorized DVD version of this film.)

And the greatest miscasting of all: an actor named Dudley Manlove, dressed in disco polyester, British accent and limp wrists, is the alien soldier Eros (the Greek god of sex). The film’s Oscar oration moment would fall to him: the juvenile, totally unscientific speech to the humans about atom bombs, hydrogen bombs and the upcoming “solarenite bomb” that will explode the sun and thereby all the planets in the universe; thus Earth must be stopped from discovering that bomb. And to prove we mean business, here are some reanimated dead people… 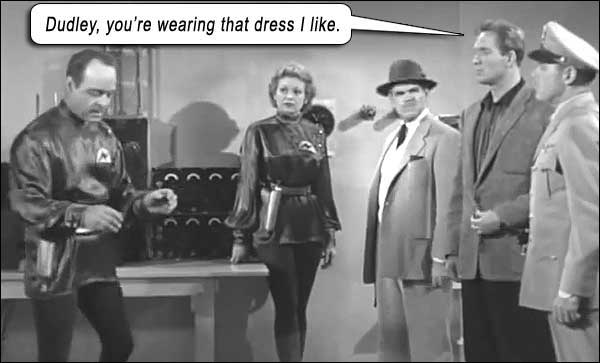 Eros has a female assistant, Tanna, who can’t operate a ray-gun, because even alien women are incompetent at man-tasks it would seem. She stands up for Eros by expanding on his viewpoint to the humans and is pushed aside by him in anger, Eros explaining that in his land, women are used only for procreation and “not for fighting man’s battle.” (Ironic, coming from a guy who looks like he is repulsed by the touch of women.) So your land is as sexist as our land? Well, why didn’t you say so? Come on in, pal!

Although Eros is no better at fighting man-battles, easily bested by the humans who use the ancient technique of boxing to subdue him. Eros responds well by boxing back in a human manner and losing, using no alien fighting techniques that might benefit him. When we read in mythology that “Eros was often regarded as the protector of homosexual love between men,” it all makes sense…

When the marketing screamed: “Can your heart stand the shocking facts about Graverobbers From Outer Space?” it was utterly misrepresenting the movie, as the aliens’ endgame was not to simply rob graves for the heck of it, but to stop the humans from developing a bomb. But then, no one said Ed Wood had any clear throughline for his own movie. The two plot devices – zombies and universe-destroying bombs – were so at odds, it seemed like Wood must have collided with his script assistant carrying the pages to another movie.

The production stories behind PLAN 9 are more interesting than the movie. But isn’t that always the case with every movie, good or bad? It’s only because this movie has gained notoriety as one of the worst that its production notes hold any interest at all. Pick ANY BAD MOVIE from ANY ERA – it will have interesting backstories and production anecdotes. Any movie that stands on its anecdotes as claim to historical value, rather than its finished product, is not worth the celluloid it was shot on. Such is the case with PLAN 9. Reading the Wikipedia entry for PLAN 9, the only reason we revel in the hideous kinky is because we know this movie is acknowledged as a benchmark of bad moviemaking. The same goes for MANOS, SHARKNADO, THE ROOM and any other film that captures the imagination of the public through grotesque ineptitude.

Somewhere in Los Angeles, a Chrysler is missing its hubcaps.

No matter its infamy, PLAN 9 is still an execrable piece of dogshit you would step around in the street. It does not deserve to be archived by any film preservation societies, it does not deserve any “awards” (Golden Turkey, Razzie, or otherwise), and it most certainly should not be termed “so-bad-it’s-good” – BECAUSE THERE IS NO SUCH THING. Sometimes bad is simply… bad.

I swear, people, I will bring the dead back to life to show you how serious I am!