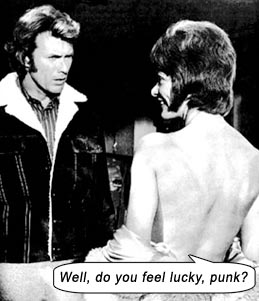 In 1971, 41-year-old Clint Eastwood confidently flaunts his directing debut with PLAY MISTY FOR ME – at an age when most actors these days are contemplating which reality show to make asses of themselves on.

Already known as a bankable actor for his Sergio Leone DOLLAR trilogy and a flurry of westerns and war movies, this was a breakout move for Eastwood, who had to waive his director’s fee before the doubting studio would give him the opportunity to direct.

Directed with the ease, grace and vitality that would become his trademark, MISTY is the story of Carmel DJ, Dave Garver (Eastwood), whose apartment screams zenith of bachelor chic (I grew up believing that to be a successful panty hound, I’d need to get an oasis for the middle of my living room); a player who meets a rabid fan, Evelyn (Jessica Walter), whose recurring on-air request is to “Play Misty for me.” What Dave believes is a one-night stand, Evelyn believes is the start of Special Something. When Dave tries to rekindle his affair with his regular squeeze, Tobie (blond-and-70s-tasty Donna Mills), delusional psychopath Evelyn has other ideas.

One of Eastwood’s mentors, Don Siegel (who directed him in three previous movies, and one which would be released a month after MISTY – a jagged little pill called DIRTY HARRY), cameos as a bartender, proudly watching his protégé angle the camera, pick up the girl, and birth an American legacy.

imdb
Word Count: 400      No. 150
Erroll Garner plays Misty for us.
I believe it is the 1954 Erroll Garner jazz instrumental of Misty that we hear in the film. Lyrics were added by Johnny Burke, and singer Johnny Mathis made it his signature in 1959. No matter what version you’ve heard, you’ve NEVER heard it performed like this. Never like this!
Roberta Flack ♦ The First Time Ever I Saw Your Face
Not only did Clint bring back to prominence Erroll Gardner’s jazz classic, this movie also featured a new Roberta Flack song (written in 1957 by Ewan McColl). It would win 2 Grammys in 1972 – Record of the Year, and Song of the Year. The song was ranked at Number 1 on Billboard’s Hot 100 Singles for 1972.