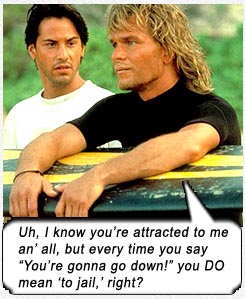 Dudes, dial the overacting down to a 7.

In POINT BREAK, Patrick Swayze is Bodhi, a surfing bankrobber – or is that a bankrobbing surfer? – on the Los Angeles coast. Keanu Reeves is FBI undercover agent, Johnny Utah (I know, you can’t even think that name without overacting), hot on the tight tail of Bodhi – but not before catching some totally tubular sets, brah!

The cute hook is that Bodhi’s gang of bankrobbers disguise themselves as ex-presidents of the United States: Bodhi himself is rubber-masked Reagan, accompanied by LBJ, Carter and – of course – the crook, Nixon. The other cute hook is how Utah goes undercover with Bodhi’s bodacious gang and becomes unnaturally affected by Bodhi’s man-essence, thereby clouding his resolve on bringing the bankrobber to justice.

Before he goes undercover, Utah is hesitant about learning to surf on a noticeably valley-boy board, “Why can’t I just walk around with this thing under my arm, act stoned, ask some questions?” Uh, Keanu, isn’t that already your Acting Method?

Kathryn Bigelow directs, paying especial attention to all the sinewed male muscle and nekkid woman-flesh to keep her teen demo happy. Funny thing is, POINT BREAK does actually skim along like a greased board on Hawaiian neckbreakers, never letting us out of its action grip, or its bro-tastic overacting and über-cheese one-liners: 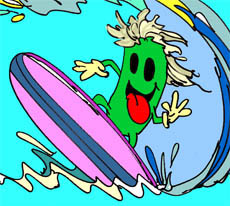 “Let the girl go!”
“I can’t let you do that!”
“It’s just you and me, brah!”
“Noooooooooo!”
“There’s a new thing called radar – maybe you’ve heard of it!”
“Sorry, I can’t do that, brah!”
“When they fall on you, you won’t back down. They’ll have to burn your ass to the ground.”
“You wanna ride to glory, fine! But don’t take Tyler with you. Tell me where she is – and I walk away.”
“You crossed the line. People trusted you and they died!”
“You’re gonna go down. It’s gotta be that way.”… all delivered with such stoner brio you’ll get a contact high if you sit too close to the screen.

The only actor who really has a handle on his character is Patrick Swayze. He is so hip into his bleach-blond rebel it hurt my poetry slam nerve; analytic, yet impetuous, pushing life to the edge, super cool in body, mind and spirit. We can see Swayze is in prime athletic condition just by the way he skydives – tumbles out of a plane with his legs held straight along his bent-double sinewy body; using that smoldering sensuality to entrap not just women viewers, but Johnny Utah as well, who can’t seem to just shoot him and be done with it – the iconic scene where Utah has the drop on Bodhi, but chooses not to drop him, instead shooting his gun into the air while screaming in what we surmise is unfulfilled sexual tension.

At one point, Utah tells Pappas he’s been tailing Bodhi all day, with a cheeky wink to the audience, “He goes into Patrick’s Roadhouse for awhile…” – ROAD HOUSE (1989) being Patrick’s OTHER movie stacked top to bottom with quotable über-cheese…

POINT BREAK resolves as cheesily as it began, with Utah arresting Bodhi on an Australian beach (with American actors doing the most idiotic Aussie accents you will ever hear outside of an Outback Steakhouse commercial). My question is: does Utah really have authority to arrest Bodhi in another country? He might be able to recommend Bodhi’s arrest or extradition, but to actually click the cuffs on him during a fifty-year storm after a bromantic tussle in the waves?

But there’s one last twist to Utah’s sexual tension: Bodhi begs to go down not like a caged animal, but with one last slammin’ wave to the face, so Utah uncuffs him, obviously fantasizing that wave as his own lower torso; Patrick’s credo from his ROAD HOUSE days spiraling like sensual butter through Utah’s head: “I want you to be nice until it’s time to not be nice.”

You got it, brah!

Patrick Wayne Swayze: 1952 – 14 Sep 2009.
During the writing of this article, I heard of Patrick’s death from cancer. R.I.P. Dalton; we will always remember to Be Nice…