The Boat, The Wave, The Snake.

One scene in POSEIDON will live with you long after you’ve dried off and found your land legs: Kurt Russell actually drowning. Literally. In a move that is half-Method/half-Madness, Russell lets his lungs purposely fill with water to achieve what looks like someone actually drowning. And actually drowns! It was arranged that lifeguards retrieve him before he went all the way – yet what a risk for a few seconds of disturbing realism! Where is that fine line that separates the spark of life from the nullity of death? He might have escaped from New York and LA, but could Snake Plissken actually escape Death itself? 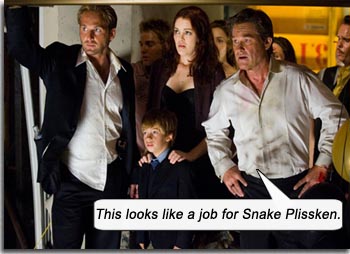 POSEIDON is the well-made remake of THE POSEIDON ADVENTURE (1972), with much more water and a lot less shouting.

After we meet the human-interest stories onboard, the titular ocean liner is capsized by a tidal wave and floats upside down, leaving those human-interest stories to battle their way to the bottom of the ship to escape through its hull, amidst explosions, rising seawater, and the two leads trying not to be the bottom in their uneasy macho alliance.

Starring Kurt Russell and Josh Lucas in the wet roles made famous by Ernest Borgnine and Gene Hackman shouting at each other. Lucas is kinda Hackman’s role, not a priest but just as randy, a professional gambler hunting a MILF in the form of Jacinda Barrett. Russell takes up the slack in the kinda-Borgnine role, though not husband to a hooker, but something far more psychologically damaging – father to a libidinous chick (Emmy Rossum), whom he is constantly blocking from having The Sex with her boyfriend, (Mike Vogel). He’s a former mayor, at one point, establishing his bona fides in a rescue, by claiming, “I used to be a fireman.” Yeh, we saw BACKDRAFT – but can you lift this frickin’ girder off my legs?! People are so stupid, they’d more likely trust you if you claimed to be Snake Plissken.

In the pathos Red Buttons role, Richard Dreyfuss, as a sad gay man (is that an oxymoron?) waiting for a call from his ex-lover on this New Year’s Eve. A bittersweet humor in his suicide attempt: forlornly stepping out onto the deck to make a call at midnight, no reply; he throws his phone overboard, steps to the railing, climbs with the intent to follow his phone… and sees the tidal wave in the distance. Here’s the funny part: he steps down from the railing. Uh, wouldn’t it have been easier to die by actually jumping into the tidal wave than going back into the ship and suffering bruises, blood, lungfuls of seawater, people kicking your face as they’re climbing over you and Republican anti-gay policies?

Kevin Dillon as Lucky Larry. With a personality as conceited as his name, yeah, we’re pretty much rooting for the tsunami. Singer with Black Eyed Peas and the ship band, Fergie, hugs Captain Andre Braugher during a fatal dunking. For them, there’ll be no morning after…

Some gruesome deaths when the ship capsizes, but none more personal and disturbing than that of Freddy Rodriguez (in the Roddy MacDowall role as the waiter); a seemingly un-human decision made by Dreyfuss to sacrifice Rodriguez. But we need to look past the “social” contract to basic human survival. Dreyfuss (complicit with everyone else) exhibited nothing that our species doesn’t exhibit every second of every day – selfishness – to ensure survival. So much for No Man Left Behind.

Director Wolfgang Petersen and screenwriter Mark Protosevich (from Paul Gallico‘s The Poseidon Adventure) have inserted more terrifying primal fear sequences than Irwin Allen’s ’76 blockbuster; like being caught in an air shaft while water is rising, a grate at the top that won’t open; or forced to fill a chamber with water to force its valve to open and let them through – not one sliver of air at the top of the chamber, waiting in solid liquid for the valve to clank open. And then there’s Kurt’s disturbing paroxysms gulping water to actually drown…

At one point, Josh Lucas does what Hackman did at the climax of POSEIDON ADVENTURE. He dives into a lake of fire. As I thought, he simply passed through the flames on the surface and swam under them. I thought Hackman would do the same thing back in ’76 – but why and how did he die at that moment? Was it the fall? Surely not the fire on the surface of the water. In that king of disaster movies, that was the real disaster – giving up Hackman to the flames. At least he went out doing what he did best – shouting at Ernest Borgnine.

Balloon Clown Technology – would have saved the day.
After James Cameron’s TITANIC unleashed its visually-stunning boat-tipping technology, POSEIDON uses it with breathtaking realism to show the tsunami turning the ship on its head. But the macro question of POSEIDON:

Can a modern ocean liner actually be capsized?

A tidal wave would surely toss it around – but hasn’t it got enough ballast in its base, enough shatter-proof windows and airtight chambers to withstand such a battering?

Back in the 70s, as younger folk and less sophisticated engineers, we didn’t think to ask this question, but this movie shows us Poseidon turn on her side after the wave hits, then almost righting herself in groaning steel, ultimately succumbing to the weight of her top end and going over. And that was the moment something seemed fishy – how can the top of the ship be heavier than the bottom? Who makes ships that way? It’s just common sense that the bottom HAS to be heavier than the top. So if it is teetering on the edge of going over and there is a moment where it almost rights itself, wouldn’t the heavier bottom force it to stay right-side-up? The only way it could tip over while teetering is if the top is heavier, or if it was hit with another wave. But it wasn’t hit. It just tipped over like a balloon clown out of gas.