Not another apocalypse! This time, Kevin Costner’s to blame. Hey, wasn’t he responsible for the apocalypse in WATERWORLD as well?… 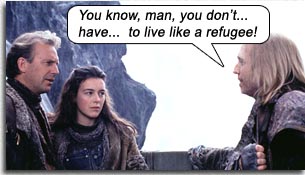 I hate the word ‘apocalypse’ – not the word itself, which is very… uh, apocalyptic.. but its misunderstanding and its consequent misuse. It means, literally, a “lifting of the veil” or “revelation” but because ‘Apocalypse’ was used to describe revelations made to biblical characters showing the end of civilization, the word has become synonymous with End Times, pestilence, Mad Max, and Republicans.

And the end of civilization in THE POSTMAN means the mail service is down.

Now I don’t want to lambaste this film simply because everyone else is doing it. After his sweeping classic, DANCES WITH WOLVES (1990), Kevin Costner has suffered much unwarranted scorn (like M. Night Shyamalan) for his successive product not measuring up to his outa-the-gate offering. But THE POSTMAN, though aiming at epic and falling short, is a well-made movie (directed by Costner, deviating from David Brin‘s novel of the same name, screenplayed by Brian Helgeland), with a message of redemption for “society” as a concept (that sometimes tips into syrup), solid performances (though a little arch at times), and delivering lots of those sexy, edgy thrills that the practice of mail delivery is renowned for.

In this (retch!) apocalyptic future, where the United States of America has become a dim memory and scavengers and warmongers rule the forested wastelands of what looks like Utah, a nameless drifter (Costner) takes shelter in an abandoned mail van and uses a dead postman’s clothing for warmth. He finds a sack of letters and decides to “deliver” them to the nearest town, cooking up a story about a rebirthed society coalescing around this government service, intending only to gain the short-term trust of the townsfolk for food and shelter.

Many jump cuts later, The Postman, as he comes to be known, is delivering letters hither and thither, unknowingly inspiring others to do the same, and actually coalescing a rebirthed society around this government service.

This re-uniting of the dis-united States causes grief for the resident warlord, General Bethlehem (Will Patton), who has exploited the fractured society by amassing an army of slaves bound by his Ape Law, now finding hope and defiance growing amongst the outposts he raids. Matter of fact, the Postman spent the whole first reel under Bethlehem’s heel, who called him “Shakespeare” disparagingly for being well-read and intelligent enough to stand up to Bethlehem. It is after his escape from Bethlehem that the Postman finds the mail van.

Like WATERWORLD, THE POSTMAN is brought down by a woman. As Jeanne Tripplehorn turned WATERWORLD’s nomad from a combination of Eastwood and Mad Max into a jerk who couldn’t control his chick, so too does Olivia Williams turn Costner’s Postman. He meets her at an outpost, where she asks to be impregnated by him – with the approval of her husband (Charles Esten). (Now there’s one benefit of the ‘apocalypse’ – sterile males with hot chicks, who need the sperm of us virile man-breeders.) Husband is then conveniently killed by a screenplay flow chart, so that she can begrudgingly tag along with the Postman and whine about his journeys like a real wife.

In WATERWORLD, I liked Costner’s “Mariner” in the first act; a man of few words and dynamite action, a self-sufficient loner who shunned society yet didn’t take shit from it. The same arc of that selfish loner (someone say sel-“fish”?) was created for Costner’s Postman: Hard Guy outlaw assimilating back into Humanity through the warmth of Woman. Yeah, I read that screenplay manual too, but we need this plot development like we need a chick who won’t stop talking during sex.

James Russo is Bethlehem’s right arm, and Larenz Tate becomes the Postman’s right arm. Giovanni Ribisi is a stir-crazy soldier-slave in Bethlehem’s army, and Daniel von Bargen is a Sheriff who realizes that the Postman, even if he is lying, is a catalyst against the tyranny of Bethlehem. And the music of James Newton Howard makes THE POSTMAN tear-jerking in all the right places.

Maybe THE POSTMAN would have fared better had it been released into a society where people actually regarded MAIL as a viable form of communication. Granted, at this movie’s release in 1997, social media was not a patch on what it is in 2013, but e-mail had become quite prominent and was exponentially wiping out paper letters faster than the dodo.

And THE POSTMAN’s legacy can only fade faster as we gallop through the age of Instant Data Transfer, facebook, twitter, iPads, iPhones, skype and holograms… For we realize that the major disconnect in THE POSTMAN is that a technological society able to wipe itself out, would have been at such a level of technology that letter-writing would have been defunct anyway, at the least, reserved for grannies and Luddites not at society’s forefront and who would not survive an apocalypse in the strictest Darwinian sense – they would be wiped out by more computer-savvy organisms who would not reap the benefits of letter-writing. (Matter of fact, to prove my point of this 2012 society’s low regard for outmoded forms of contact, the telecommunications company Von-Age is running an ad where a character says, “Letters and emails are all thrown away – but a conversation lasts forever.” It’s a totally wrongheaded statement, of course, but it’s marketing to the new age of dunderheads who think learning to play piano on a phone-pad’s keyboard simulation is learning to play the piano.)

Thus THE POSTMAN leaves us adrift with no sense of time or place.

And its attempt to place itself is also weird: The Postman fibs that the new president’s name is “Richard Starkey.” Now correct me if I’m wrong, but didn’t The Beatles conquer the universe? So how does The Postman get away with his ruse? And if he is of an age where he knows The Beatles’ drummer’s original name, all those people around his age would also know it. Heck, he even meets Tom Petty as Tom Petty, which means this is set in a future when Tom Petty is still alive, like maybe three weeks from now, and I don’t think the legacy of The Beatles is going the way of Buck’s Fizz any time soon. Now if he had named the president Herman Rarebell, maybe I’d buy it. Not too many hillbillies know the drummer of The Scorpions.

The final battle between Bethlehem and the Postman is resolved in that silly manner where the good guy displays his integrity by not killing the bad guy, but then the defeated bad guy pulls a weapon on the good guy and has to be shot down by someone else. Which only proves that if that someone else was not there to save the good guy, the good guy’s stupid decision to be honorable would have gotten him a bullet in the back.

And the final run of the Postman as he picks up a letter on horseback from a blond American child is 100% proof German cheese festival.

It’s all these silly little details that have caused most critics to stamp this movie: Return to Sender.