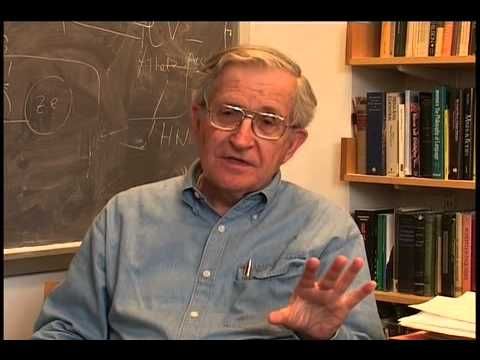 ”Let me just reiterate that I know everything.”

Not so much a documentary as a dialogue, POWER AND TERROR: NOAM CHOMSKY IN OUR TIMES is a companion piece to Chomsky’s 2002 book titled 9-11, which offers an alternate/political-insider view to the September 11, 2001 attacks on the World Trade Center, than the usual Islamophobic-breast-beating-Go-USA tripe that has engorged the Great Unwashed like blood through an erection.

73-year-old Chomsky is in cutting form, his mind still sharp, his phrases like a ball peen hammer, as he asserts, right outa the gate – as he does in his book – “every harsh repressive force in the world is going to use [the attack] as an opportunity to pursue their own agendas more relentlessly.” Immediately followed by an interview where he expands on that concept:  “…Main effect [of 9-11] was to accelerate and intensify tendencies that were already under way.”

Yes, POWER AND TERROR is about 9-11, but not approached in the ways we have grown accustomed to: either as a clinical report of the events or in jingoistic rhetoric; rather an intellectual probing of the world politics in the leadup and aftermath of that infamous day. Haters gonna hate, theorists gonna rant, patriots gonna wear their triangular hats, and the rest of us can glean the terrifying reality from the encyclopedic mind of Chomsky, as he reminds us that there are worse acts of terror perpetrated globally by the very country making a HOME ALONE face and crying “victim” – the USA – but that 9-11 was different because the act of terror was perpetrated against them. Yes, it was a terrible atrocity, but nothing new or even inordinately huge in the scale of the world; and the event is so publicized only because of the identity of the victims; the imperial powers have always been the aggressors, but because the imperial power was the one attacked this time, it’s big news.

Reminding us that most of the world considers the United States the foremost terrorist state – and giving examples of why – Chomsky tells us how governments around the world perceived Sept 11 as an opportunity to push forward programs that they knew their populations opposed or were not too satisfied with, “using the moment of fear and tension, also with the appeal of a false kind of patriotism, which translates into loyalty and subordination. That’s the kind of thing that power systems tend to do…” (cough–Cheney)

And if you think Chomsky is being harsh on the U.S., he goes for the jugular of every global power, outlining the terrorism that each of them is constantly involved in neck deep (including Turkey, Germany, Britain, et al)… Pouring money into weapons for other countries who are their allies, other countries who are carrying out terrorist attacks on others; the U.S. carrying out terrorist attacks on other countries then rewriting the history. If we do it to them, it’s normal, so why even talk about it? If it gets done to us, then it’s sacrilege. “Victors are never forced to pay attention to what they did.”

The rewriting of American terrorist history is as insidious as “Greedo fired first.” A few people still know the truths behind the spin, but as each new generation is bludgeoned over the head with the lie, it becomes entrenched as truth. If the cultural climate of pc-correctness doesn’t convince you, consult the blogs; if they don’t convince you, hell, look at the actual footage. George Lucas re-rendering the special effects in that scene showing Greedo firing first is the perfect metaphor for this ugly brand of American exceptionalism. You gonna believe the truth or your lying eyes?

I have no desire to try to convince any readers to heed or listen to or read Chomsky. If you are unaware of the man’s insightful knowledge and computer-like grasp of relationships and links between world events and their ramifications, you are either too young to care, too old to matter, or too Republican to save. This documentary is basically just Chomsky making those connections in constant dialogue – no reenactments or Hollywood cutaways showing what he’s talking about – yet is astoundingly compelling. He has a knack of putting the most convoluted political machinations into simple explanations.

Never attribute to conspiracy what can be attributed to stupidity.
— Proverb.

Chomsky is not one for conspiracy theories. He very clearly grinds out the conspiracy realities. With a fistful of facts pertaining to political machinations and international crimes and blowback on a chilling scale, we realize that “conspiracy” is a relative term, made to seem irrelevant by the fact that EVERYTHING done in the name of international diplomacy is unethical and criminal. The above quote takes care of all the rest: stupidity to think that political maneuvering in other countries won’t cause blowback for America; stupidity to think religious fanatics can be dealt with rationally; stupidity to be religious fanatics; stupidity to think that military might can wipe out a mindset (with the “war on terrorism” – a term which he explains is nonsensical), when in fact it has exacerbated that mindset since 9-11, and on it goes…

What does get annoying in this presentation are the mid-30s pseudo-intellectuals taking things way too seriously after Chomsky’s lectures and asking him questions past his exhaustion. He is trapped not more than five feet from the stage podium because his frothing fans just will not let him get off after the lecture is concluded, bludgeoning him with further discussion, autographs, pictures, theories and irrelevancies. It’s one thing to star-worship someone, but prove how smart you really are and have the decency to drop the dialogue and let the man get his warm milk and hot bath before the black helicopters come for him.

POWER AND TERROR: NOAM CHOMSKY IN OUR TIMES (Nov 2002)

The original 2001 book was updated in 2011 with the subtitle “Was There An Alternative?” and an added essay after Osama bin Laden’s death (or “death,” as I would put it).

You will not read any fluff here, as Chomsky outlines plain, unsexy fact after fact, neglected, covered up, or just promulgated as lies by the ignorant mainstream media and the pernicious governments it is supposedly reporting on:

♦ 2001 article, on an analysis in the New York Times  by Serge Schmemann: “…the perpetrators acted out of hatred for the values cherished in the West as freedom, tolerance, prosperity, religious pluralism and universal suffrage.” Chomsky writes: “U.S. actions are irrelevant and therefore need not even be mentioned. This is a comforting picture… It happens to be completely at variance with everything we know, but has all the merits of self-adulation and uncritical support for power. And it has the flaw that adopting it contributes significantly to the likelihood of further atrocities, including atrocities directed against us…”

♦ 2011 article: “…UN deputy special representative of the Secretary General for Afghanistan, Robert Watkins, reported that the security situation in Afghanistan has worsened to its lowest point since the toppling of the Taliban a decade ago…”

♦ 2011 article: “The Bush administration used the opportunity to advance its assault against most of the population, and future generations, in service to the narrow corporate interests that dominate the administration…”