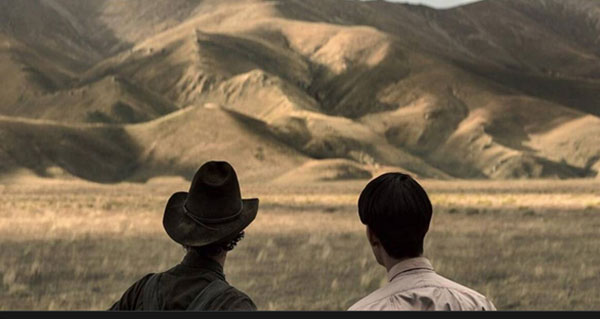 “You see that there dog—I mean, doggy—I mean, do you like doggy-style—”

Dog of a film.

A meandering story with no throughlines, no payoffs and no plot, that everyone says we have to love, because it’s gay.

THE POWER OF THE DOG is simply boring, pretentious, attempted art-cinema, for faux-sophisticates and LGBTQ to fawn over and tease out psychodrama and social messages. About a ranch-hand in 1925 Montana, a deeply-closeted homosexual who terrorizes his brother’s new wife, mentors the wife’s son, and stares into the nearby hills at the shadow of a dog that MIGHT mean something but doesn’t.

BROKEBACK MOUNTAIN this ain’t. It’s infuriating that writer-director Jane Campion won the Best Director Oscar for this innocuous pap. Someone should have won for the controlled acting; even though the story leads nowhere, the performances from all the players are stellar.

Benedict Cumberbatch is the closeted cowpoke Phil, rugged and masculine, acerbic tongue to strangers and family alike. His polar opposite brother is sensitive George (Jesse Plemons aka Fat Todd); George’s new wife is Rose (Kirsten Dunst, married to Plemons in real life!), and the teen son that drives the non plot points is Peter (Kodi Smit-McPhee), somewhat less than manly, drawing the derision of Phil and his ranch-hands. 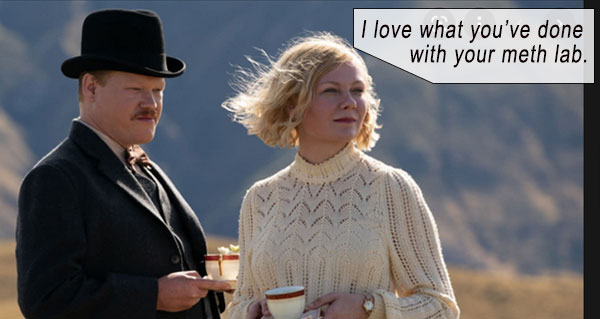 So does Phil harm Rose in any way? No. Does he mock the effeminate Peter to suicide? No. Does Phil have “intentions” with underage Peter when he mentors him? No. Does the shadow of the dog exert any power over him at all? No. Number one rule in screenwriting is: “What does this character WANT?” We surmise – like every closeted gay character – that he wants to be Out; able to live his fullest life amongst his cowboy and cowman friends. How does he try to achieve his wants? Uh, he talks with the boy about his ambiguously-homo mentor, Bronco Henry. Then he dies. The End.

We realize no one – in the film at least – has written in any motivation for Phil. He’s just existing, not moving forward toward any goal. There is a sinister undercurrent that Phil may be trying to destroy Rose, so that he can have the full attention of his brother back – but no, he terrorizes her just for fun, it seems—no wait, with gay characters it’s all about the sexuality, so: he terrorizes her as an outlet for his repressed homosexuality. Oh, I think I’m getting the hang of tenuously linking motivation to gay.

When Phil goes to his Cherished Gay Cove and rubs Bronco’s scarf sensually over his naked body, he sees Peter spying on him and chases him from the cove, furiously screaming. Next scene – suddenly he wants to be pals. Why? Well, it’s either malice aforethought (leading the boy to a gay bashing), or the long game (winning the boy’s confidence only to rape him). Or a third endearing option – maybe Phil found a kindred soul in the boy and was trying to support the boy’s sexual confusion in his time of teen, and maybe even direct Peter to what he truly was… but again, we can’t tell, because each option’s outcome is implied heavily – but nothing actually occurs in any of those directions. Maybe it’s the way we’ve been conditioned to believe that every action must have an equal and opposite interesting reaction. I mean, there isn’t even a scene where Phil must save Peter from the leers or pawing of the overtly hetero men on his posse; he just takes him under his wing and it’s plain sailing mentorship, with Rose crying that she doesn’t want her son bonding with Phil.

Again, at first we think Rose is discouraging the relationship because she is sure something rapey is on the horizon – but no. We are told it’s simply because she’s an alcoholic and “overreacting.” Overreacting to WHAT though? Well, to the potential rape of her boy! She’s like a movie audience that knows the film should go in a certain storytelling direction and is as shocked as the rest of us when it doesn’t go in ANY direction.

When Phil is poisoned, at first we think it’s because Peter started to apprehend Phil’s ulterior motive to trap him or tap him. But no. Nothing as interesting as that. It seems like Peter poisoned Phil just to make his ma feel better. But wasn’t Phil fulfilling the role of mentor and friend to the boy quite legitimately? His ma had nothing to worry about! Why then, did Peter kill him? Was it some sort of Oedipal thing he had with his ma? Huh, you should know better than that by now, Movie Maniacs – that would be interesting, and ain’t no room for interesting in this here dog of a film. 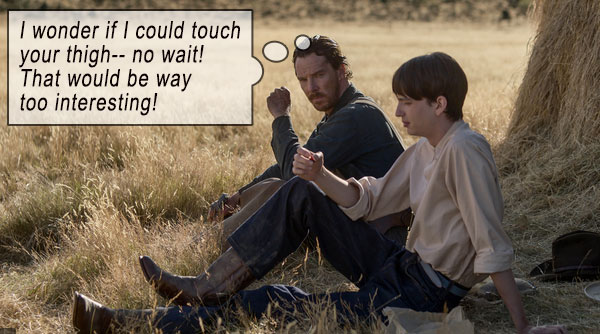 From a 1967 book by Thomas Savage, The Power Of The Dog might have been a braver story back then, but transplant that languid, controlled storytelling into modern cinema and it translates to “nothing happening.”

Even the title is misleading and irrelevant. Phil loves staring at a shadow he perceives in the faraway hills, that his ranch hands cannot discern – a dog’s open snout. It’s just a coincidence of the light; it’s not as if there is gold buried at the dog’s snout, or property up there that needs reclaiming, or a special place where Bronco took his cherry – NOTHING. And there is no “power” that the dog exerts on him, no “power” that he draws on. And I’m not even going to entertain the fact that Peter reading from Psalm 22, “Deliver my soul from the sword; my darling from the power of the dog,” has any deeper meaning whatsoever. It’s either an author trying to be saucy, or a writer-director completely missing the author’s intentions.

Or it’s just Phil staring at a fucking shadow. And he’s totally gay.